Yosemite: Watch out for the Raccoons!

Our next stop is somewhere I’ve definitely been looking forward to, Yosemite National Park! The park is located in the Sierra Nevada mountain range in the state of California. It’s a sprawling wilderness of mountains, forests, waterfalls and lakes and the drive up to and through the park is breathtaking. This area of California is all about the national parks and we pass through loads of small towns that cater for this – diners, motels and camper vans everywhere.

Driving on the right hand side of the road takes a bit of getting used to but once you get the hang of it, it’s no problem. The roads in the US are so wide that the cars nearly drive themselves, there’s even cruise control that lets you take your foot off the pedal and just fly along. Saying that, once we get into Yosemite the road winds around the mountains and down valleys to our destination, the oddly named ‘Curry Village’ and our campsite ‘Housekeeping Camp’.

Our lodgings consisted of 3 solid walls & 1 canvas curtain and roof with beds and storage racks inside and a picnic area, a bear resistant food box and a fire pit outside. We also had electricity, the luxury of it!! After hotels and airbnb apartments, this is the ‘back to nature’ leg of our trip and good training for South America.

There was a real mix in the campsite of American families, foreign backpackers like us and serious rock-climbers/hikers. If they opened a North Face outdoor shop here they would do very well! People seemed to keep to themselves or their own groups but we did get chatting to our nearest neighbours Alan and Debbie from Nevada who were returning after a 17 year absence.

When we arrived it was dark so we got to work getting a fire going, real Boy Scout stuff, but now with beers which were getting warm and needed to be drank quickly!

We did a ‘Survival Shop’ (at Walmart) on the way in to the park and managed to get a four dollar pot that came in handy for boiling water and cooking pasta on the fire. Adding a bit of tomato sauce made it one of my best meals yet haha.

Other essential items bought in the Survival Shop were: a tin of soup, crisps, Baby Ruth chocolate bars (last seen in the Goonies), a cooking tongs, plastic bowls and cups, a sharp knife and a facecloth. It was probably my most random shop ever but if there was a zombie apocalypse I think we’d be alright!

Our first night in camp was disturbed by a ruffling in the dark at 2am, I thought Alex had got a bit hungry for Baby Ruth chocs but when I turned on the torch there was a Raccoon ruffling through our bags. He darted the minute the light went on, I don’t know what I would’ve done if he didn’t! We had been warned to store all food in the anti-bear storage box but hadn’t been warned about raccoons! Yosemite is a real wilderness but I had not expected to get that close to nature.

When we got up the next morning we were amazed by the views outside our door. As we arrived in pitch darkness, we didn’t see the massive mountains that surrounded us. The grey and blue rock of the mountains next to the greens and browns of the forrest made it look like painted scenery but that’s what U.S. national parks are all about. Nature was really on our doorstep with squirrels scampering around looking for food scraps and mule deer eating the bushes by the river. They were so used to people that they didn’t bother with us getting close and taking photos.Watch Full Movie Online Streaming Online and Download

We were up early to take advantage of the day and hiked to Verna Falls which is half way up the Half Dome Mountain, one of the park’s most famous mountains. The hike up was strenuous enough going on a steep incline for a mile or two followed by 300 steps cut into the mountain but once we got up there the view was worth it.

The 200 metre high waterfall wasn’t at its full flow as there is a drought in California but it still looked spectacular. As the water fell, it caught the light of the sun and we saw multiple rainbows. There was a large pool at the bottom where people were swimming but we didn’t have our togs, maybe next time.

We trekked on further to the Nevada Falls but turned back after that so we wouldn’t be stuck up the mountain when it was dark. Other hikers passed us by with tents and sleeping bags – they were going onto the Half Dome and sleeping up there. I think that’s a bit too adventurous for us!

We also trekked to the Merced Grove which is famous for its giant redwood trees (over 200 years old!) but everywhere in Yosemite is worth seeing. As we went down to the grove there as a warning sign about mountain lions in the area. While having our lunch there was a definite rustling in the valley below us that was definitely not a squirrel! We didn’t hang around to see what it was.

After 4 days camping we were up and out by 8am but Yosemite has so much to offer and is really well planned out with proper restaurants and hotels for when you get sick of camping and pasta. There was also a ‘Wifi Deck’ complete with rocking chairs where you could get internet access but it was kinda nice to be offline for a few days. You could come back every year (and some people do) and see something new. Next stop is Berkeley / San Francisco, which has its own share of bears! 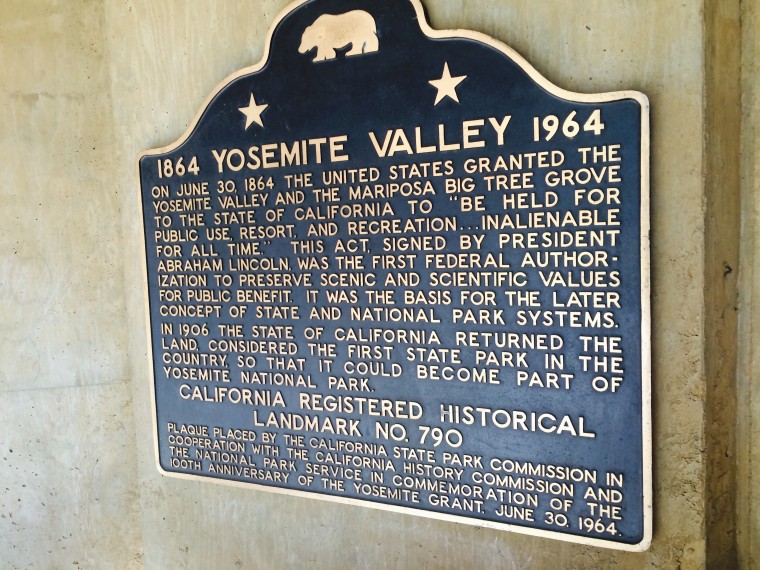 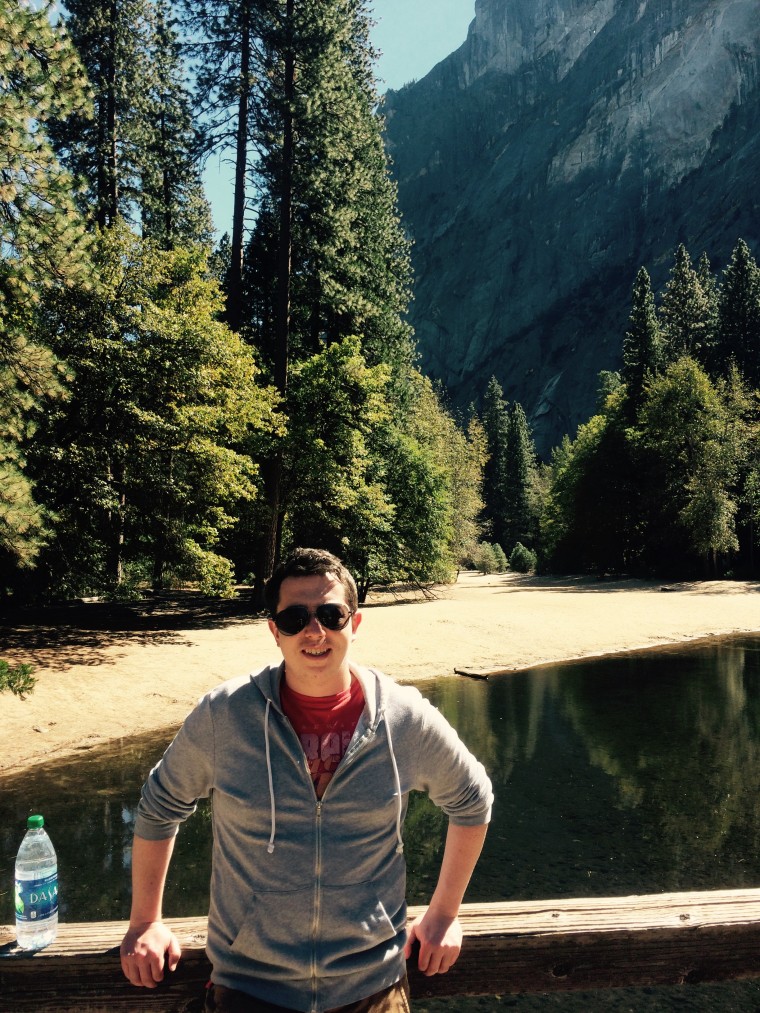 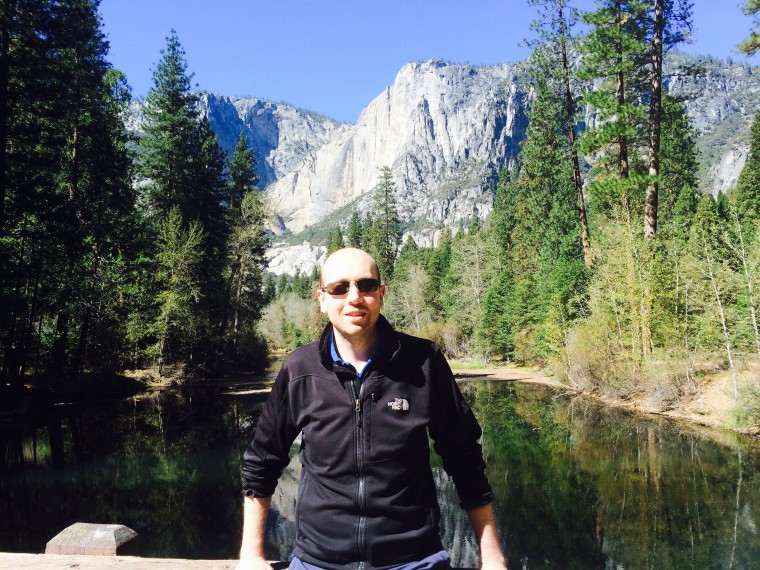 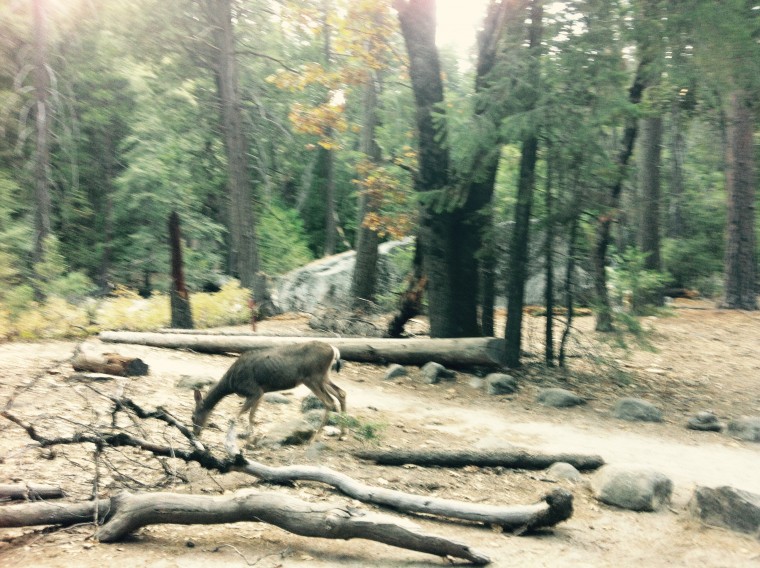 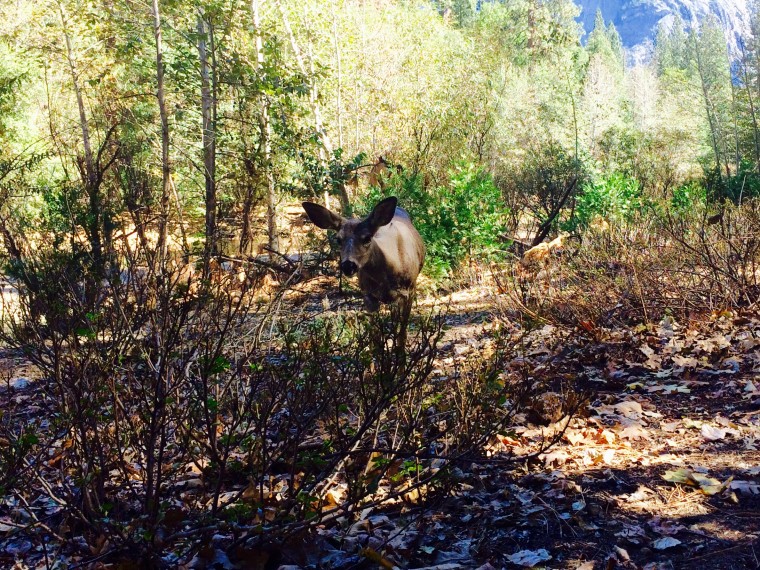 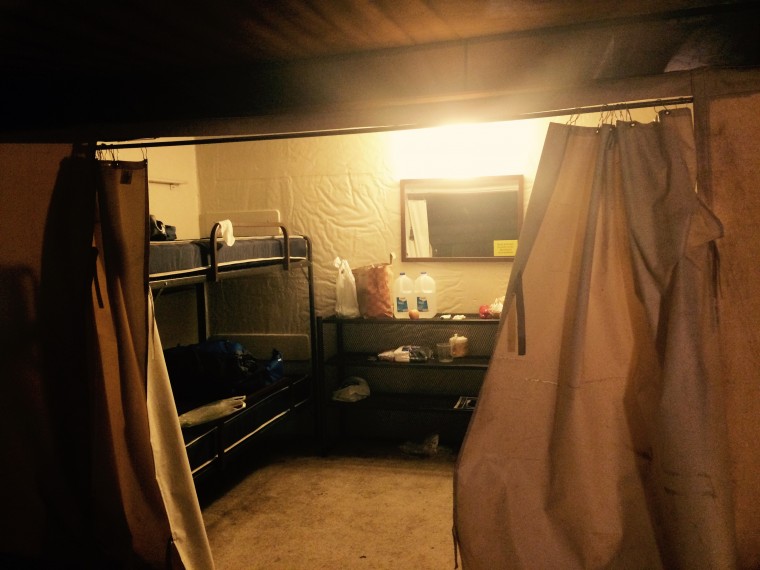 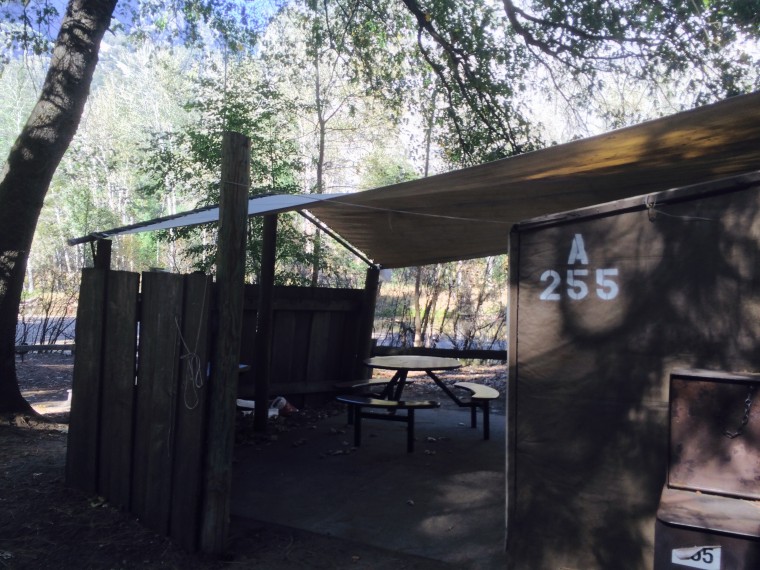 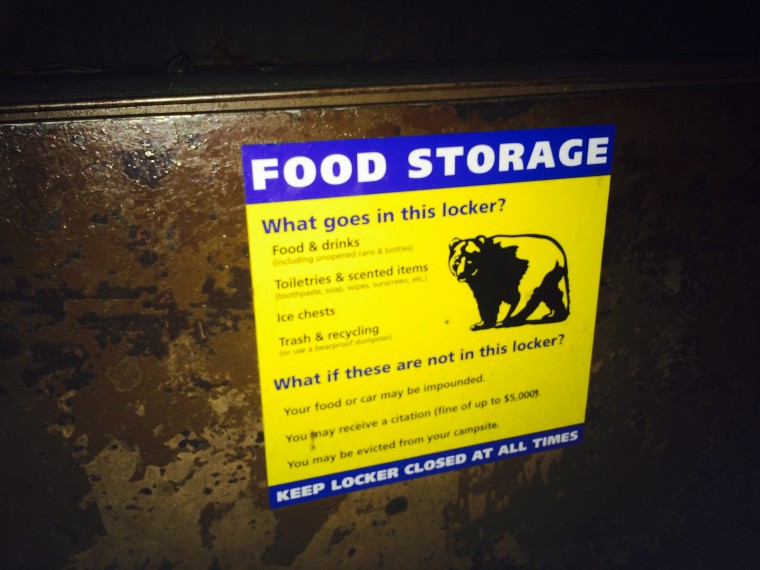 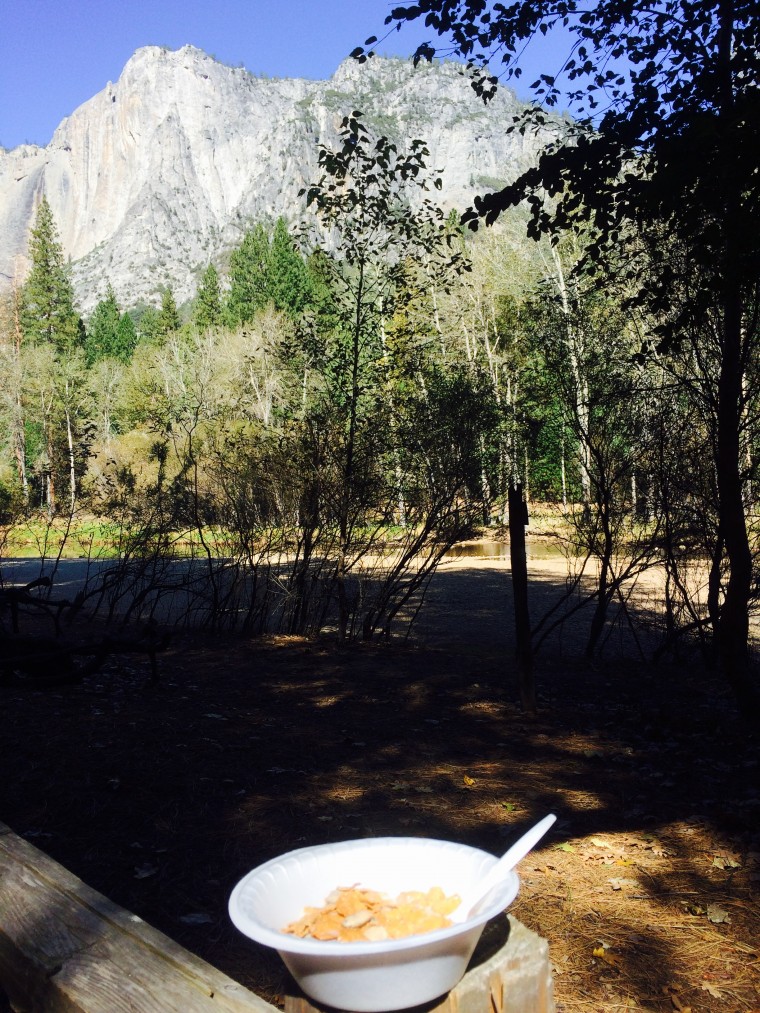 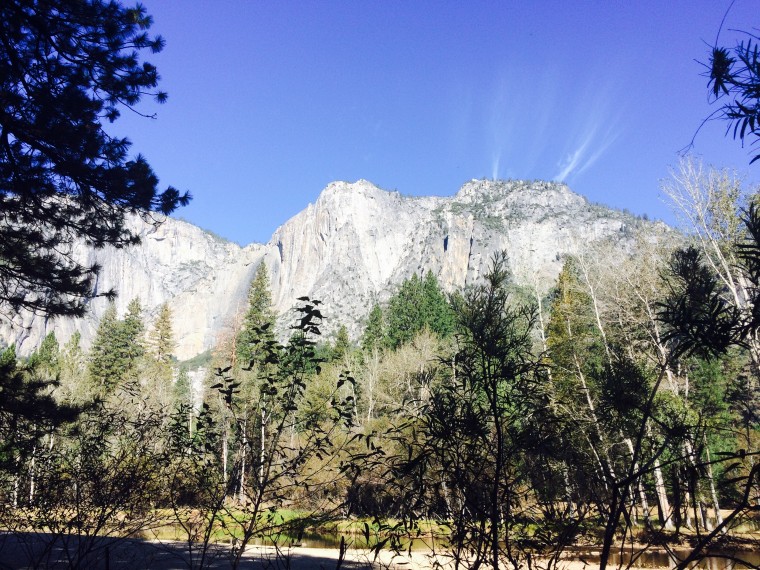 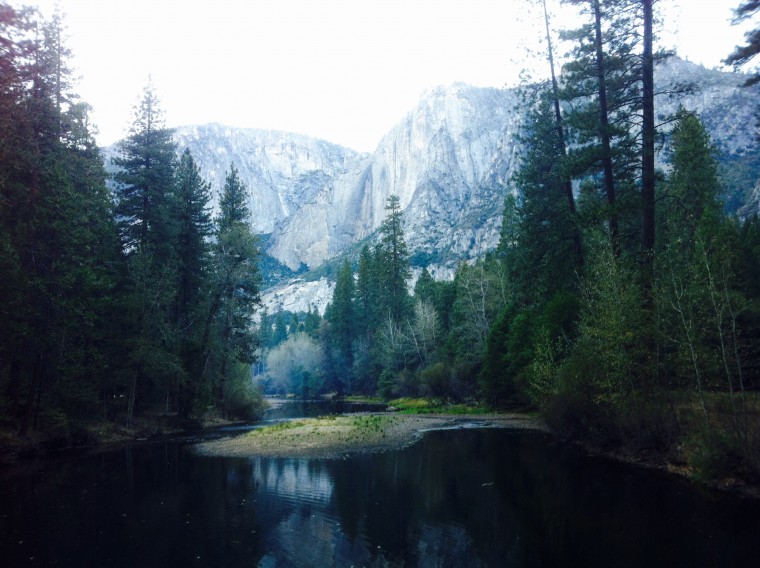 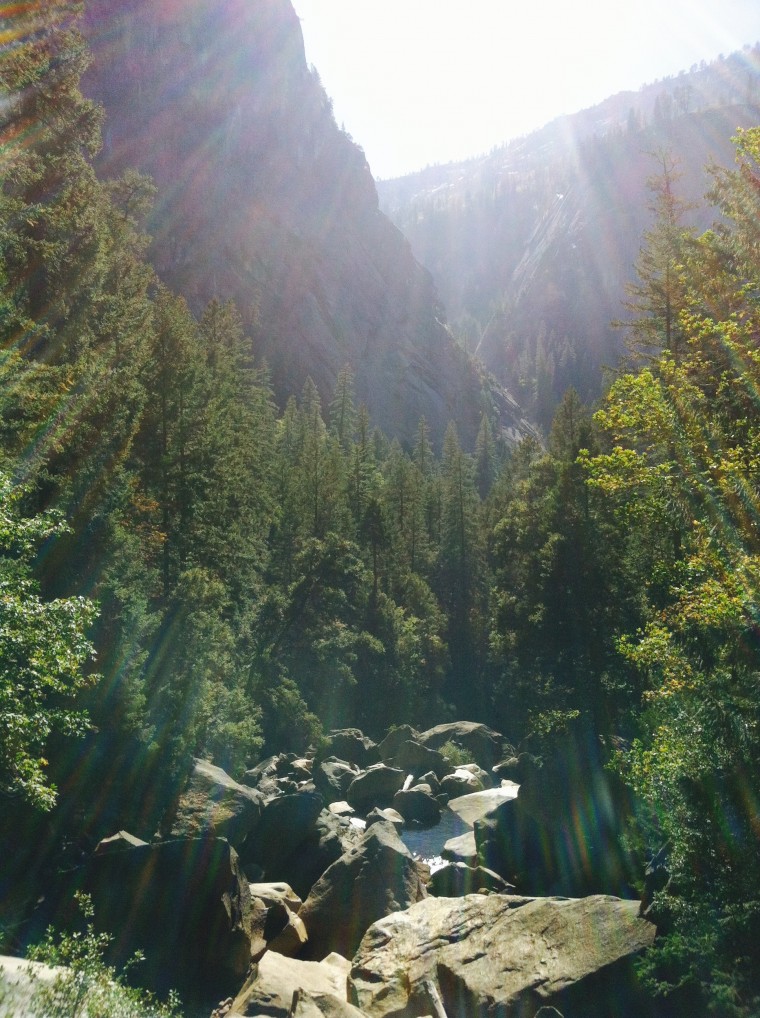 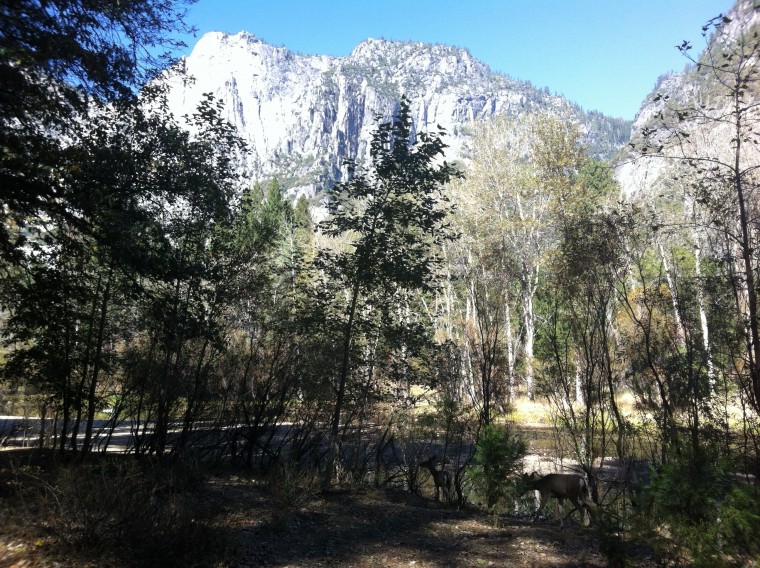 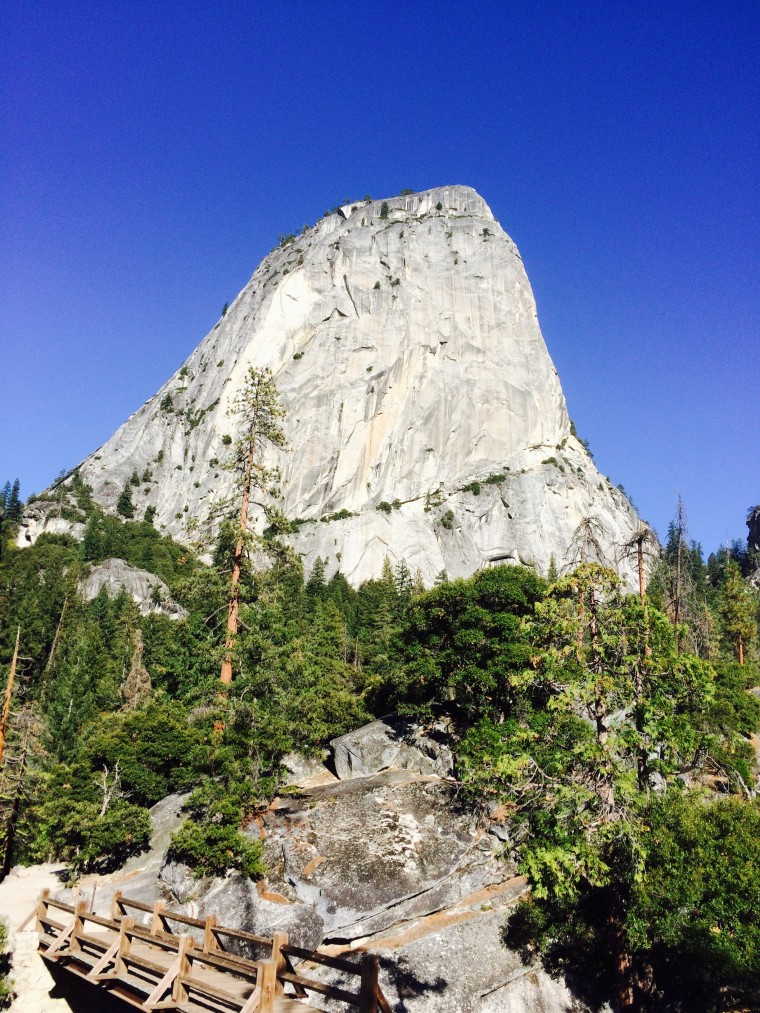 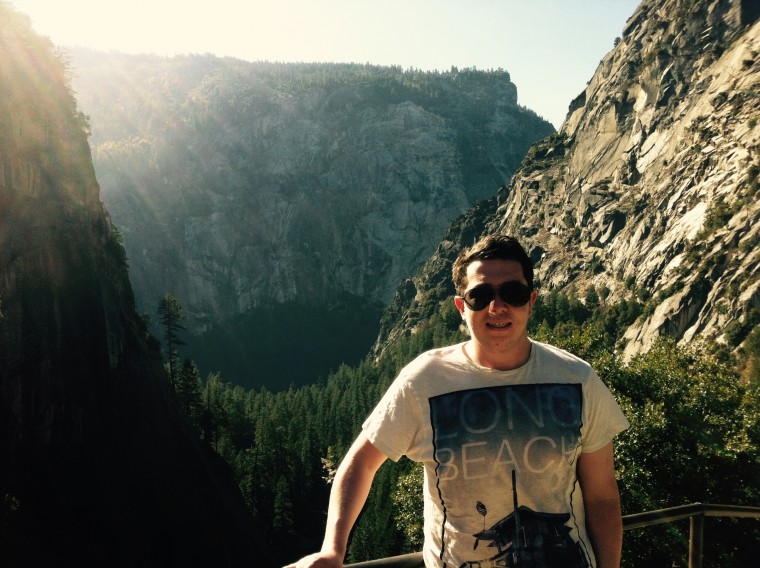 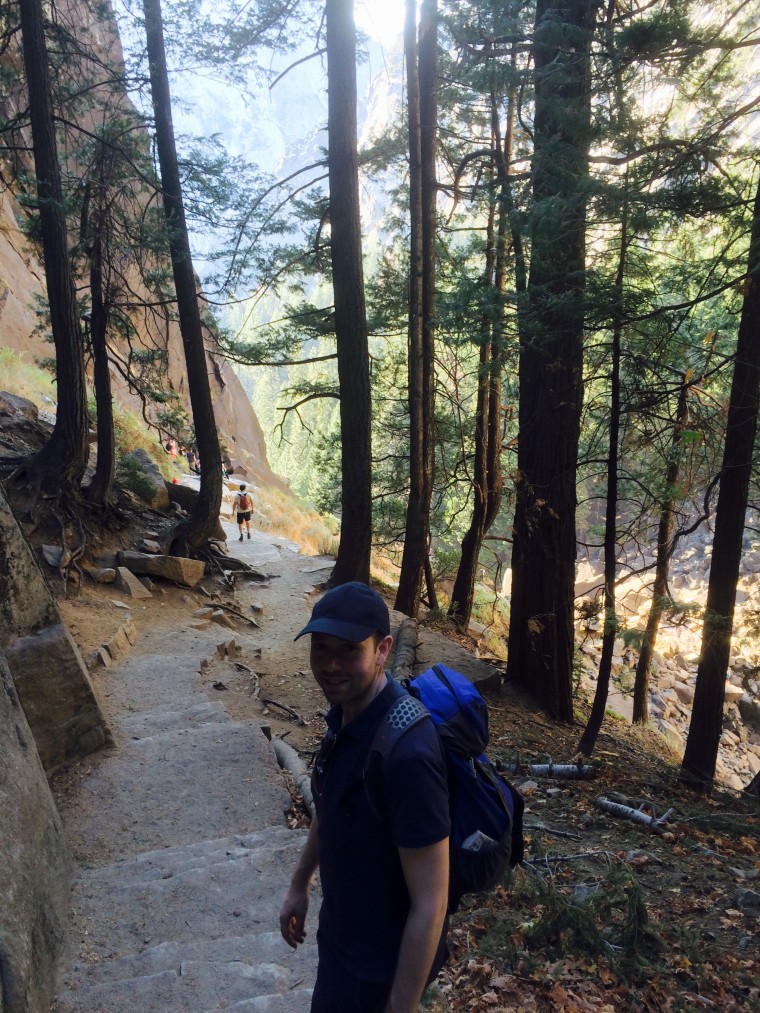 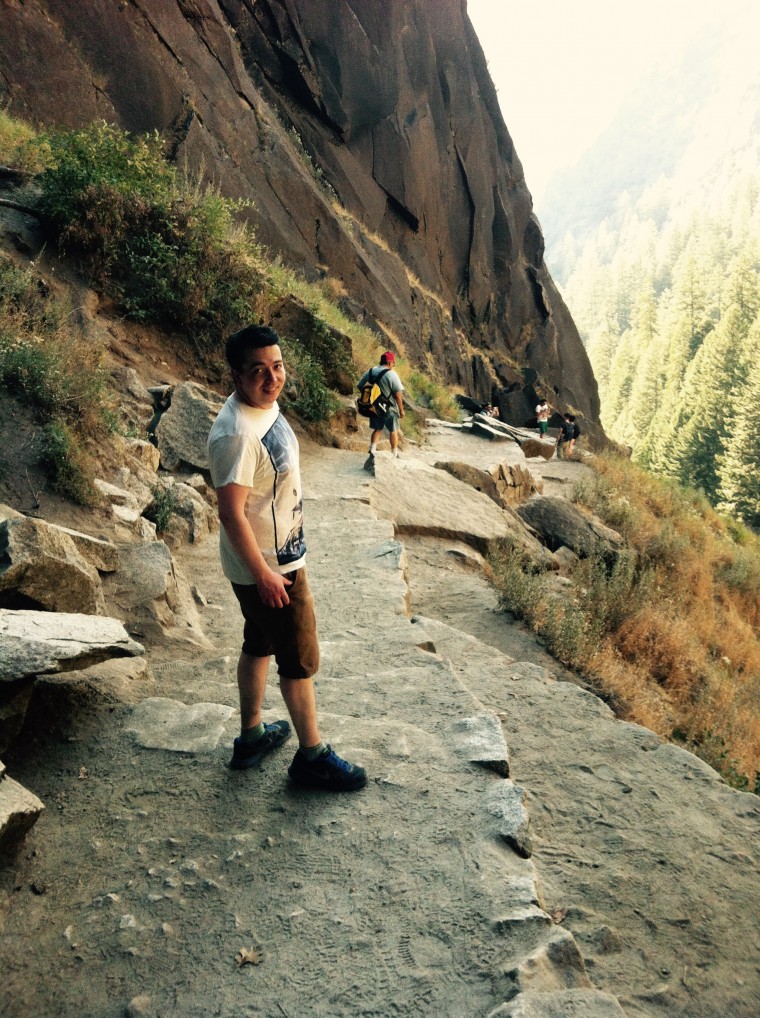 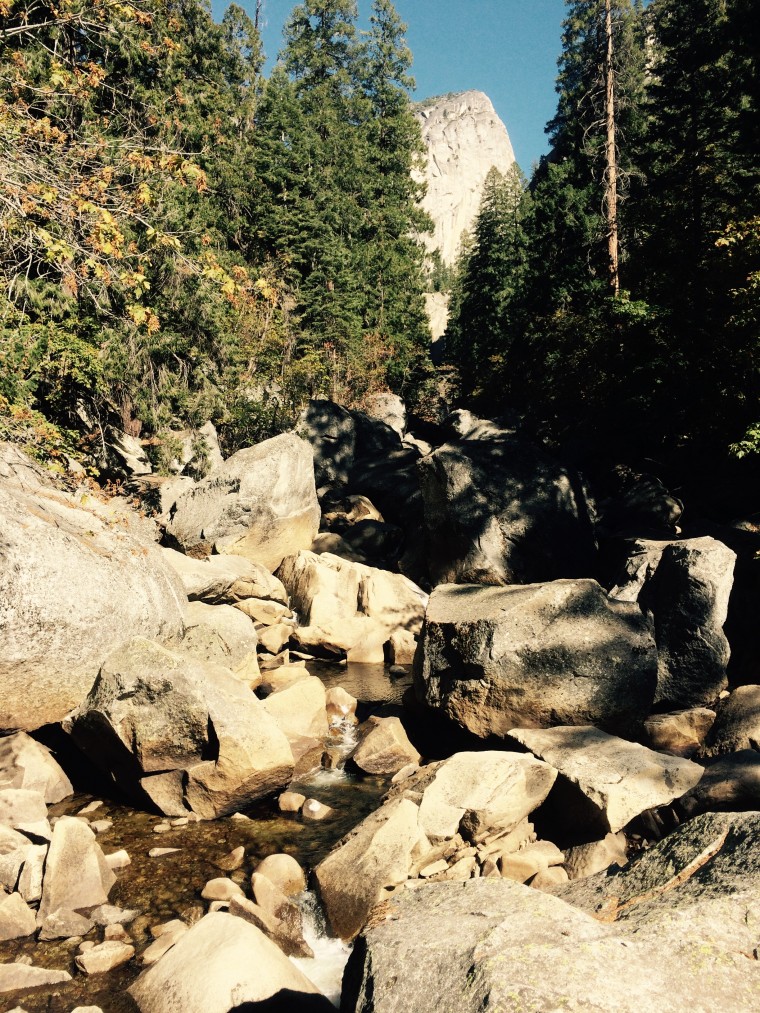 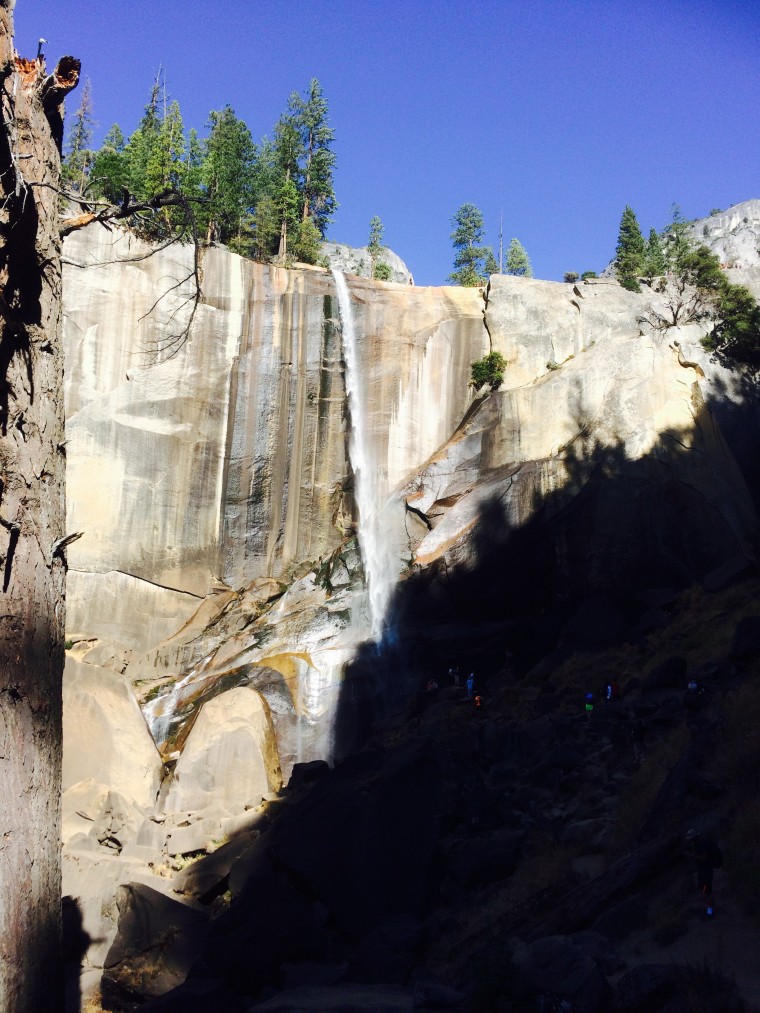 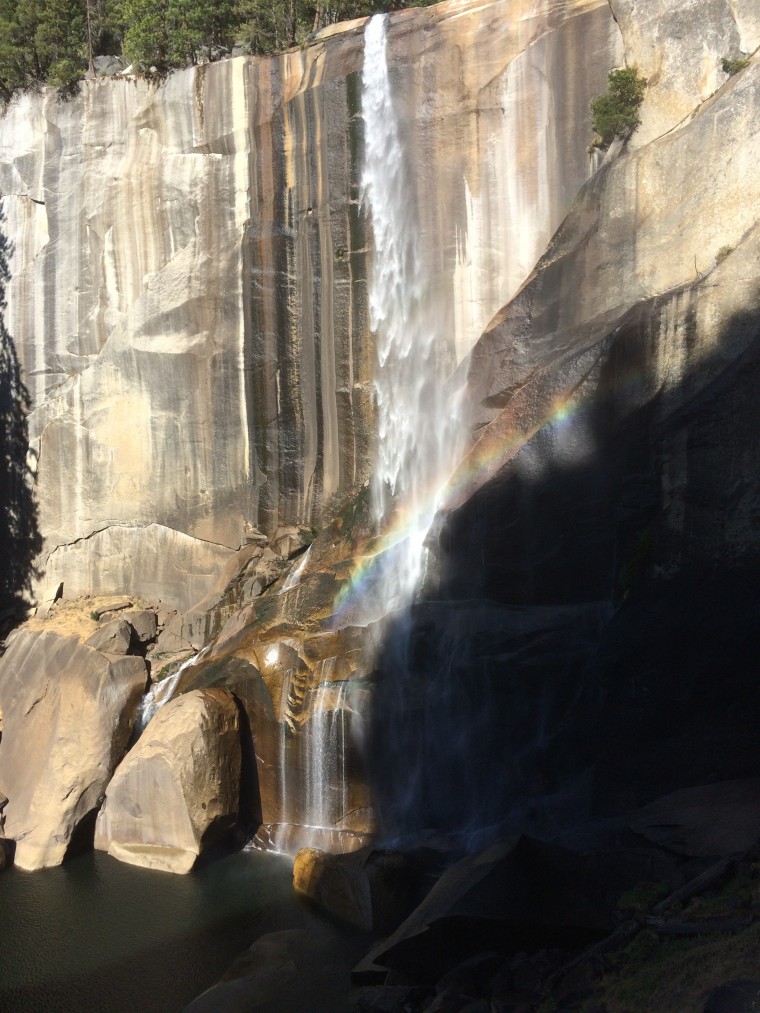 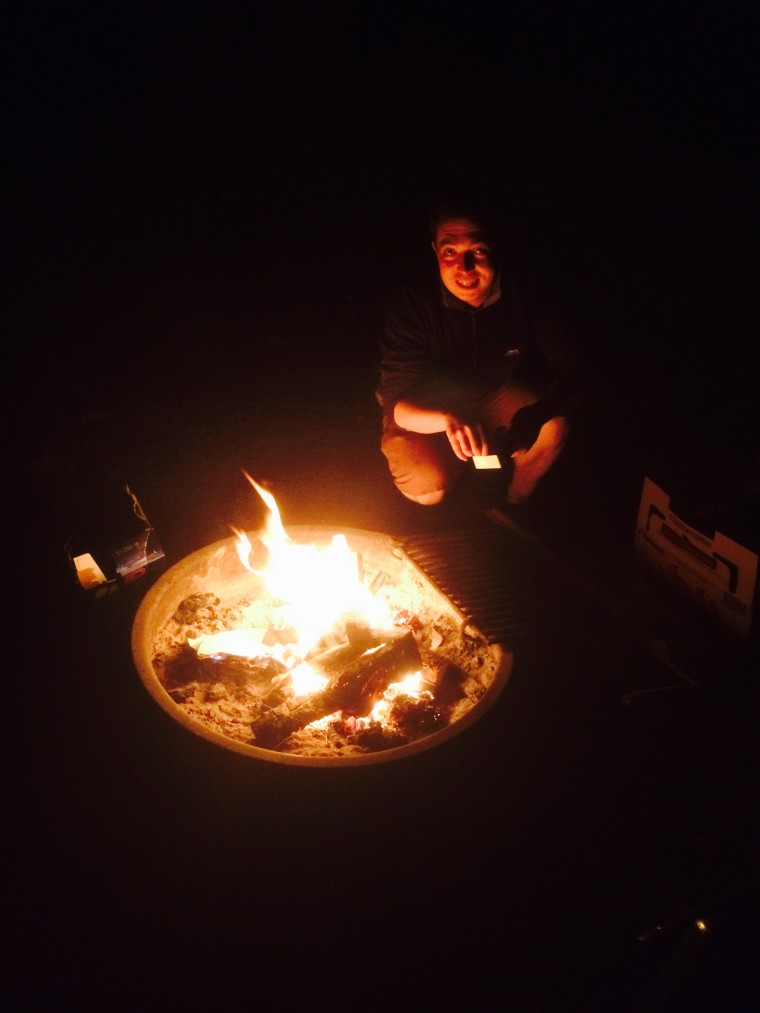 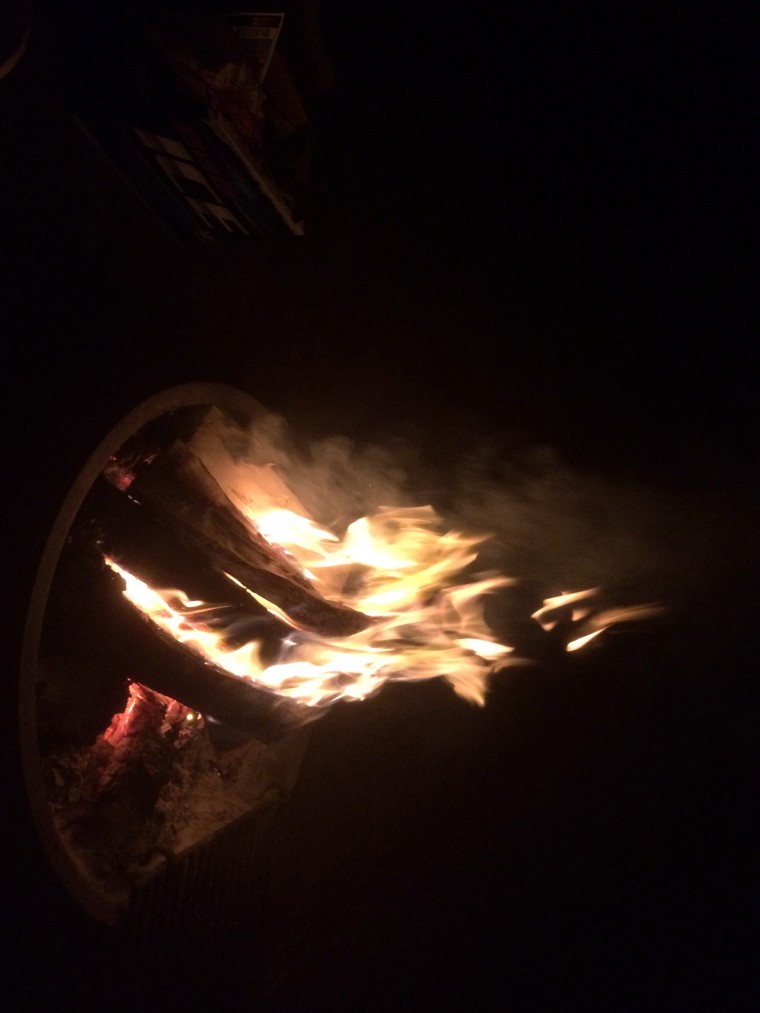 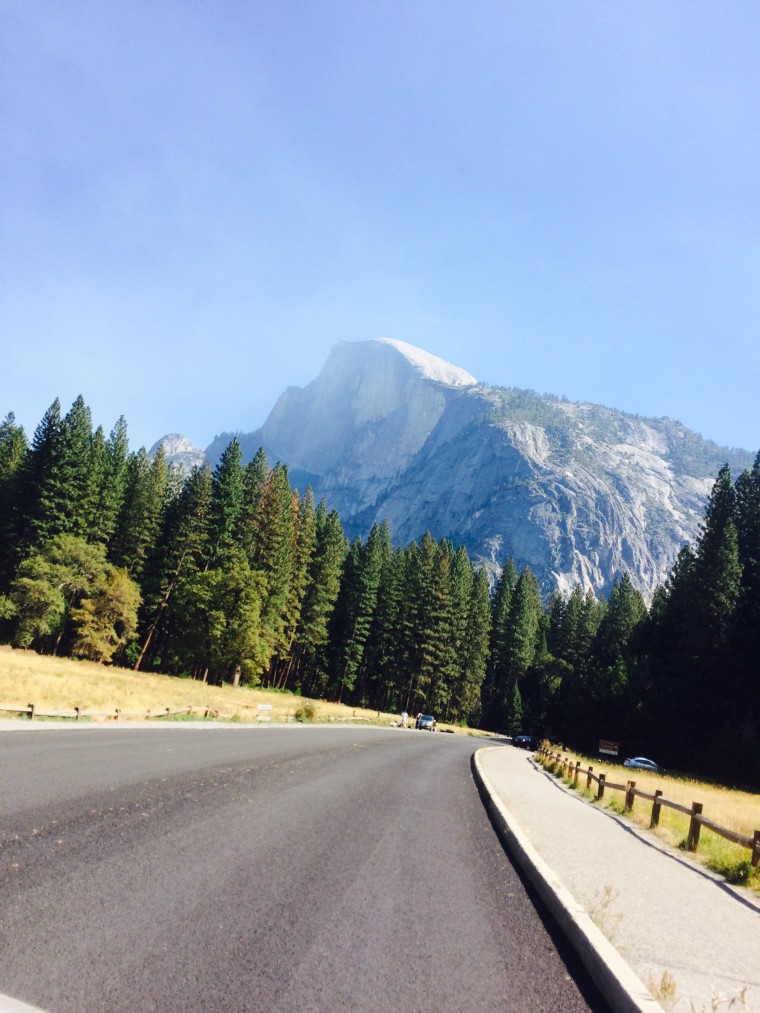 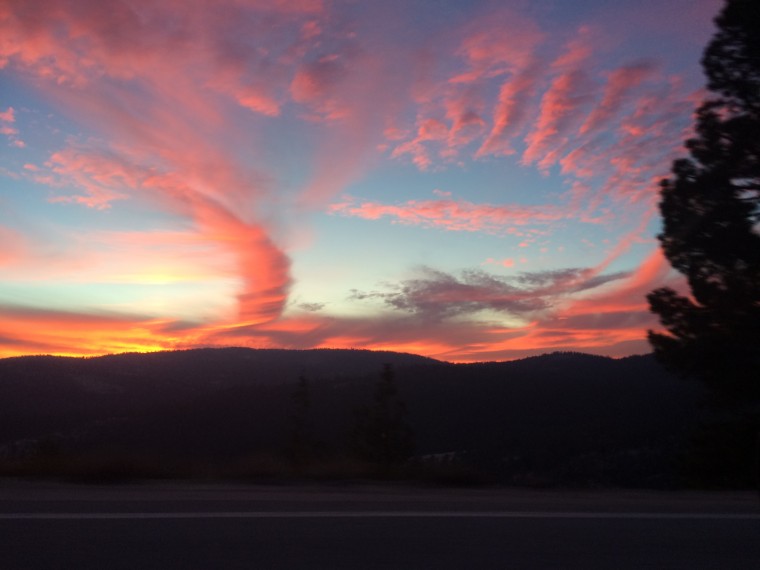 3 thoughts on “Yosemite: Watch out for the Raccoons!”