After an excellent time in New York, (see Alex’s last post for details!?!) It’s on to Las Vegas! We arrived on Thursday at 1pm local time which is 3 hours ahead of New York and 8 hours ahead of Dublin (these time zone changes are beginning to get confusing) and it’s HOT, 38 degrees during the day dropping to 30 at night.

Las Vegas is definitely an adult playground with drinking and gambling at the top of everyone’s list (no complaints here)! We are staying in the SLS Hotel which was formally the Sahara hotel before a refurbishment and is at the northern end of the strip. The hotel gave us a lovely luxury room with a great view of the stratosphere tower. The room has a light up bed and sofa with a tempting mini bar that is touch sensitive. If you take a drink out to have a look at it you will be charged for it, I’d been warned about it before we arrived by a friend who took a few bottles out without knowing and paid a high price.There is loads of food and drink options in the hotel and a monorail that brings you straight to the centre of the strip in ten minutes.

Vegas comes alive when the sun goes down, there are neon lights and massive tv screens everywhere you look and the strip is the centre of it. We spent our time going from one air conditioned hotel to another, having a drink, taking a few pictures and doing a bit of gambling, as you do!

Most of the hotels seem to have a theme including the canals of Venice at the Venetian, New York City at the New York, New York, Classical Rome at Caesars Palace and ancient Egypt at the Luxor. Some pull it of better than others, Caesars Palace looks classy but the medieval theme at the Excalibur could do with an upgrade because it looks a bit dated. A definite highlight for me was the roller coaster in the New York, New York which loops around the Statue of Liberty! I wasn’t afraid, I swear.

The size of some of the the hotels is crazy, they are like mini towns. The MGM Grand has over 5000 rooms, a shopping centre worth of retail outlets and a convention stadium that hosted the LA Kings vs the Arizona Coyotes ice hockey match while we were here and that’s just a tiny part of the strip. It would be great to be here when Conor Mcgreger is fighting in December, I’d say the athmosphere would be electric!

We found the old Arts District of Vegas at the northern end of the strip which seems to be where all the locals hang out. They had a ‘First Friday’ street party which was really cool to discover and see normal ‘Las Vegans’ having fun. We even got the offer of an after party back in the sin city hostel from a guy we met at the 7-11 while buying cans but had to decline!Watch Full Movie Online Streaming Online and Download

Another area off the main Strip was Freemont Street which is where the old Vegas casinos and bars are. They have closed off the street to cars and have loads of things to do including live bands, photo booths and a zip wire. On the night we were there, there was an 80’s cover band whose members included Dusty Springfield, Nile Rogers and a member of each of the Sex pistols, Devo and Run DMC! Best band ever!

The crowd in Freemont seemed a bit older that the crowd on the strip. These are the guys who have been coming to Vegas for decades and love the slot machines. Although the amount of larger Americans is astonishing. There are motorised scooters and wheelchairs whizzing around everywhere, you have to watch you’re toes! And of course Vegas would be complete without a wedding or two, we saw a few Elvises and drunken brides and grooms at all hours of the day and night.

Overall Vegas has been a fun party city with excellent hotels, food and drink. I think 5 days is plenty of time to spend here and if I was more of a gambler or had money to blow it would be the place to be.

We spent Saturday afternoon drinking beer and planning in more detail our next destinations. We’ve booked accommodation in Flagstaff, Arizona so we can go to the Grand Canyon and then onto Yosemite National Park. Must watch out for the Bears!?! 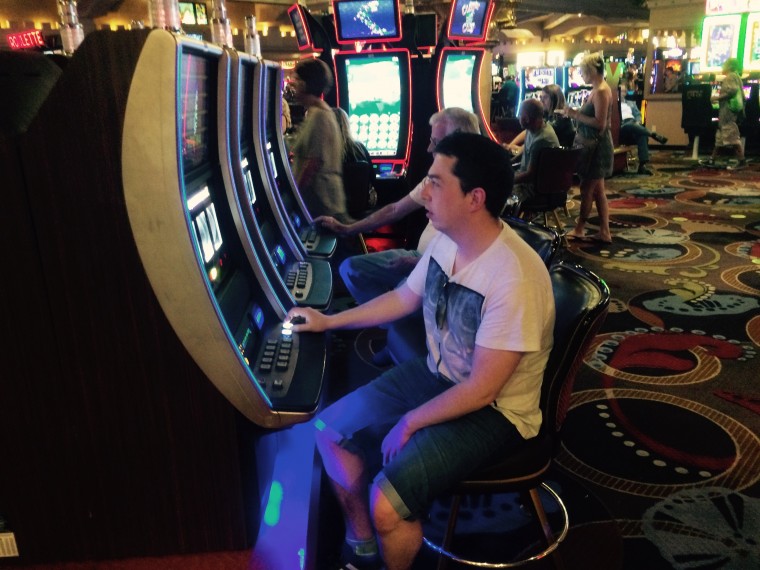 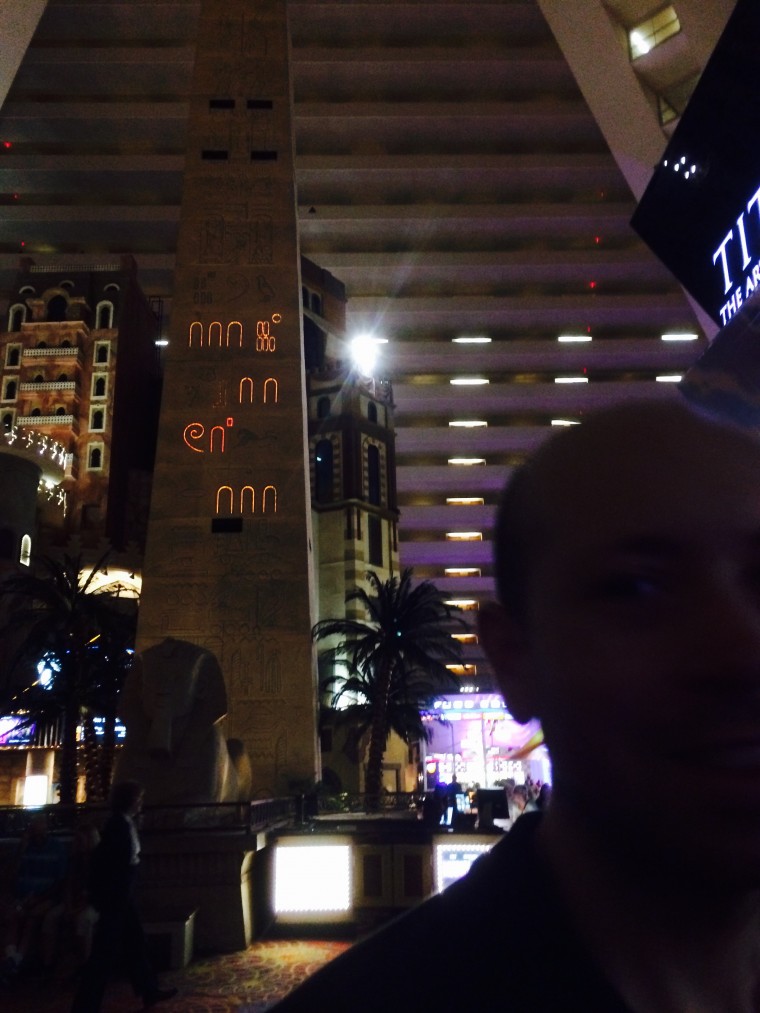 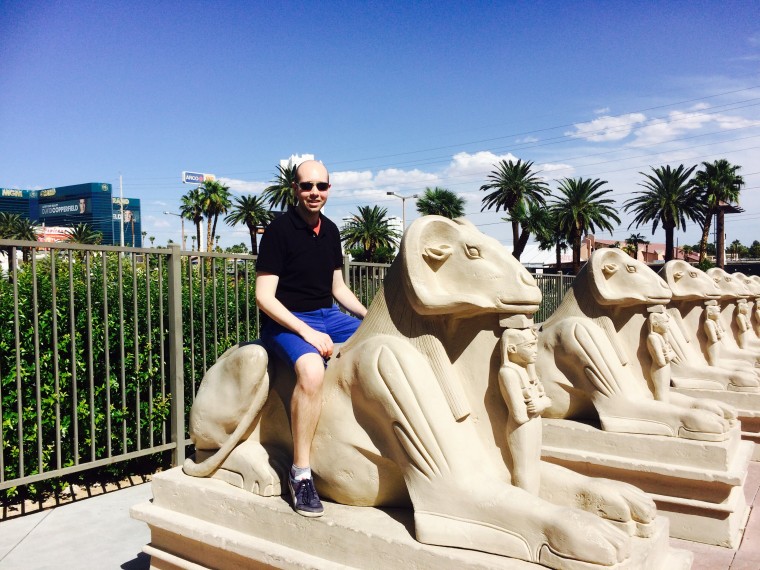 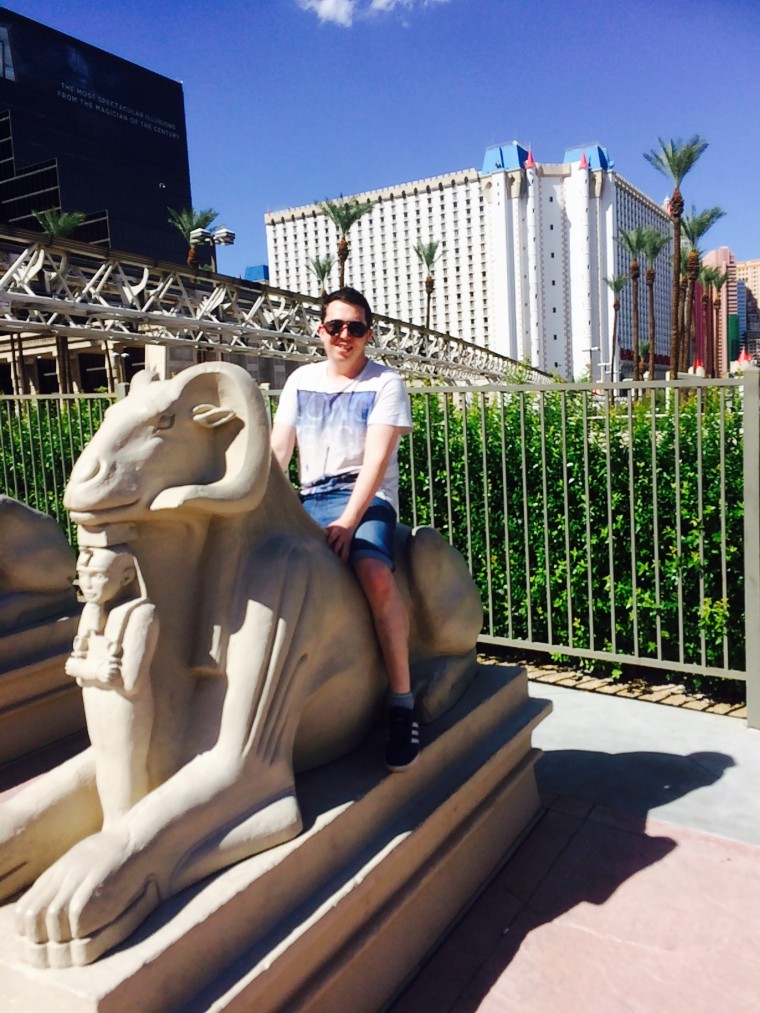 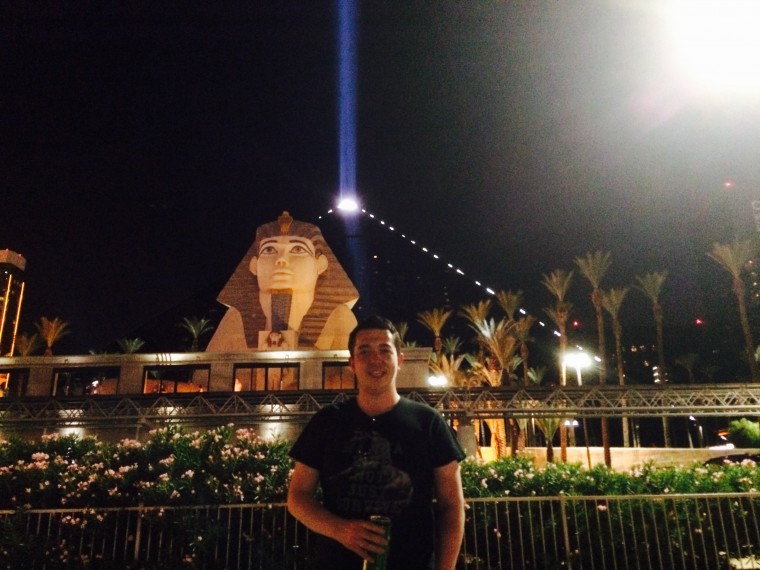 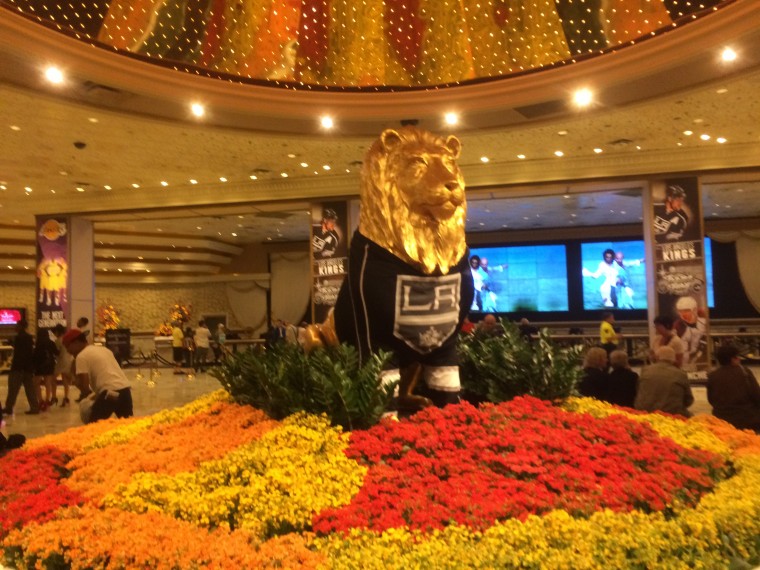 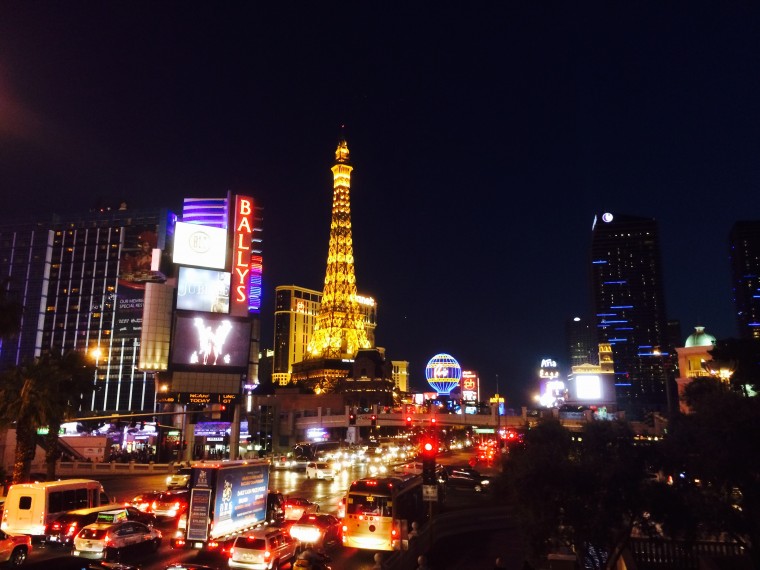 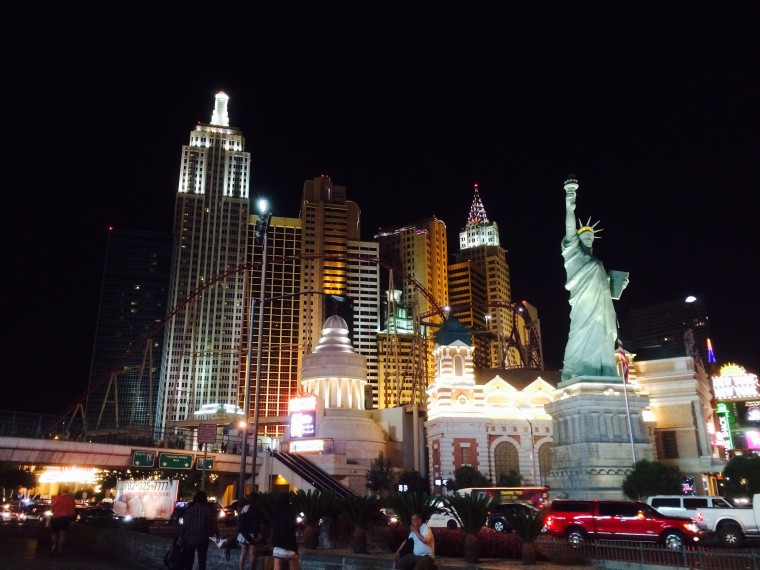 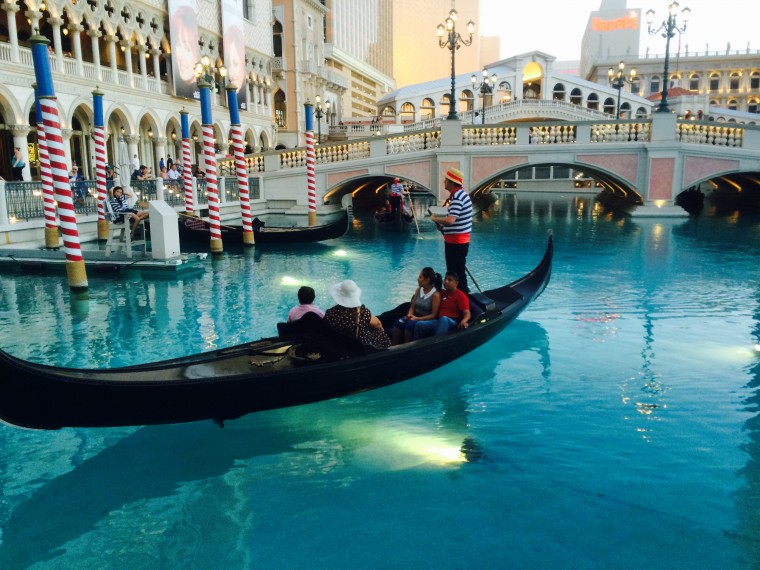 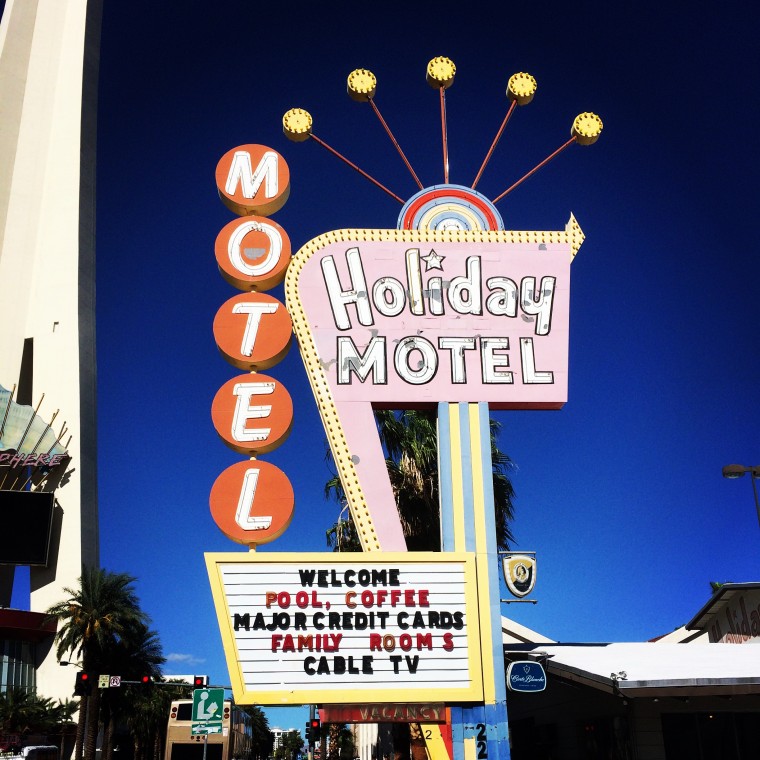 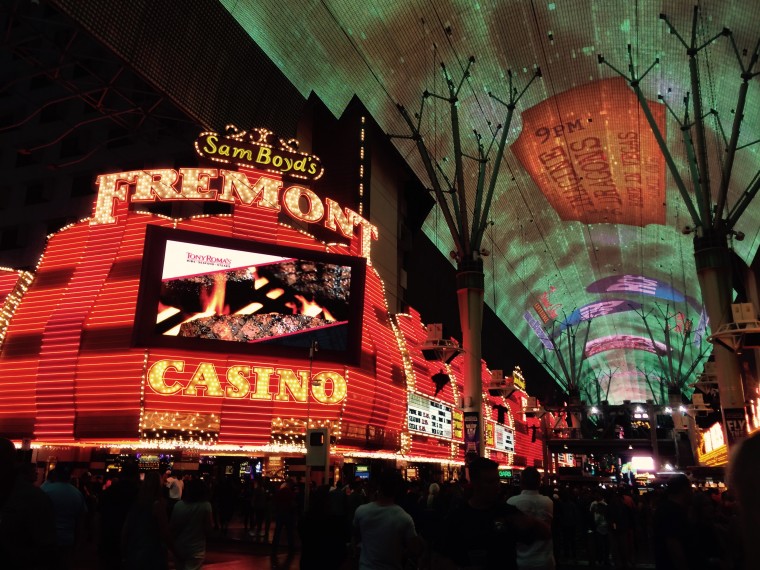 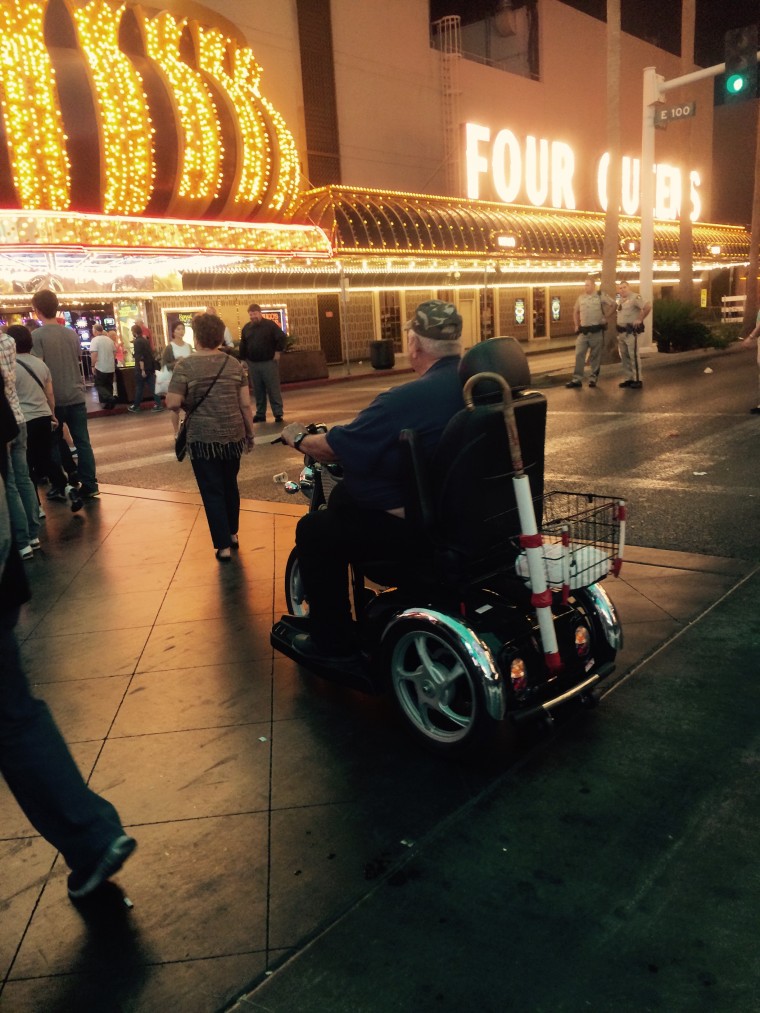 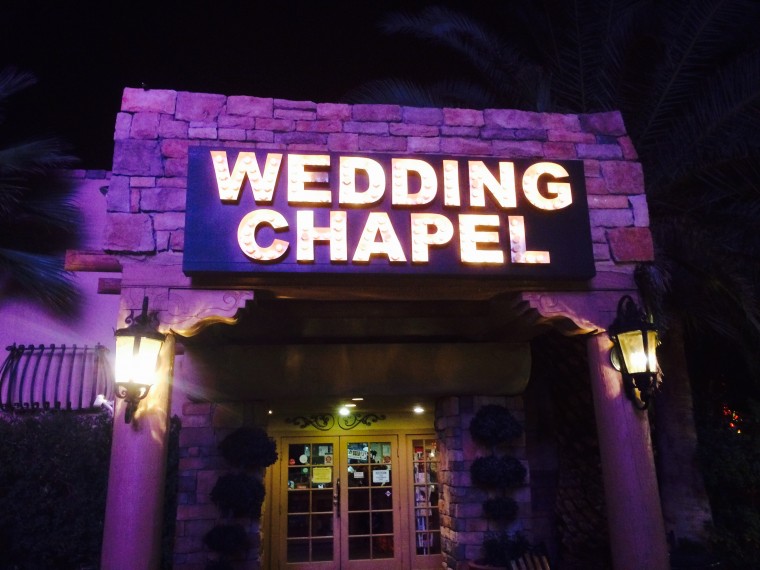 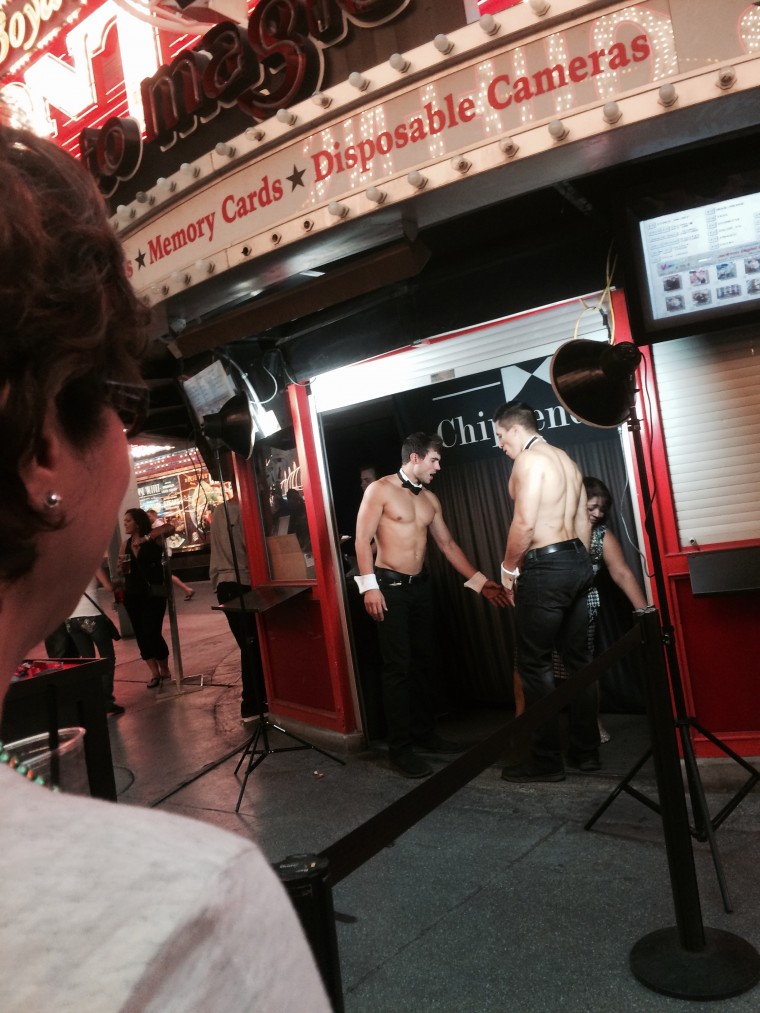 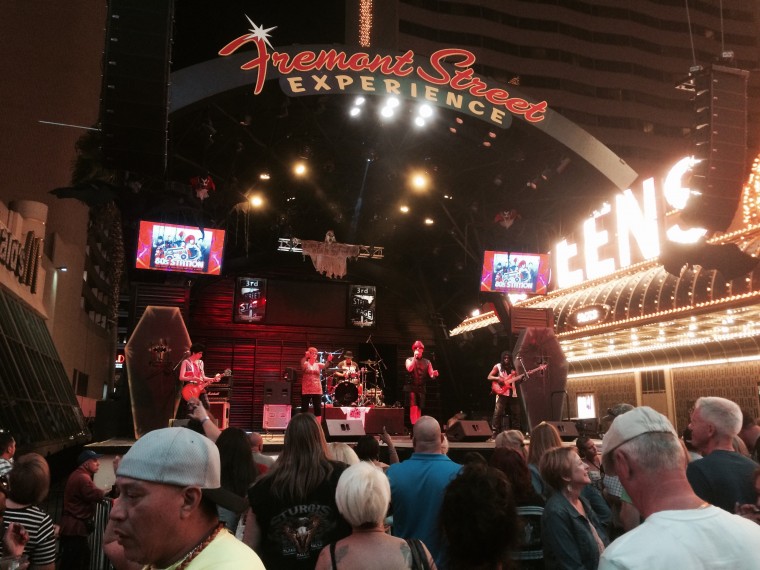 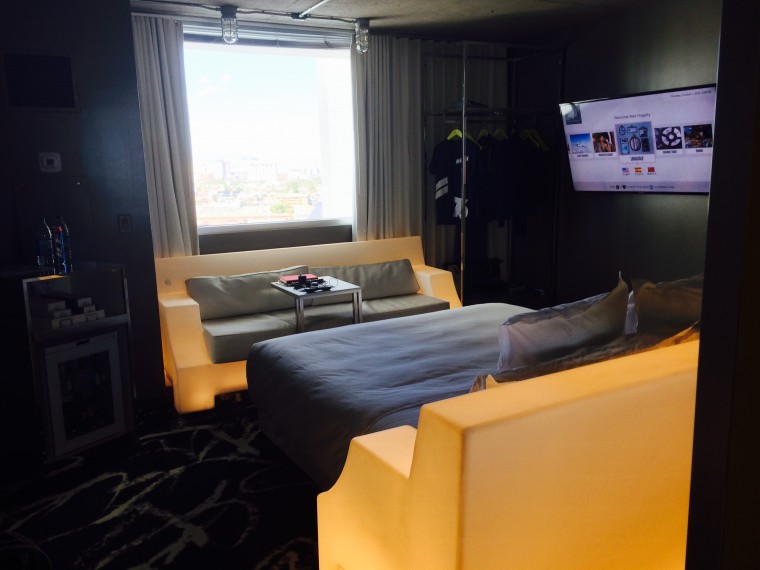 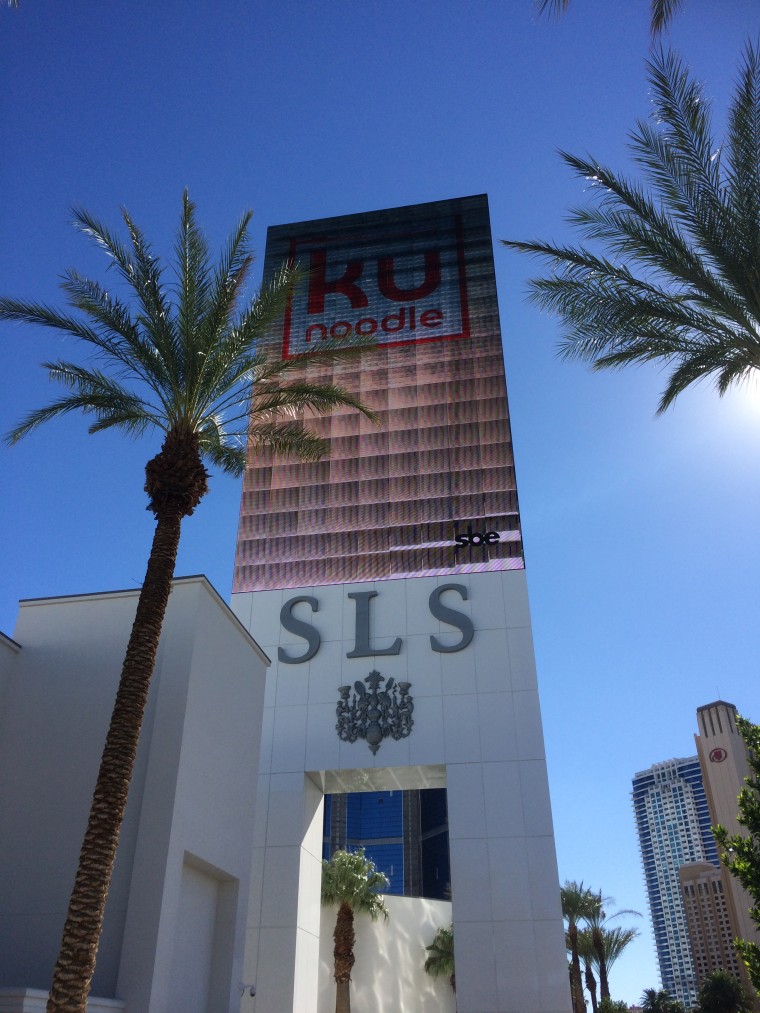 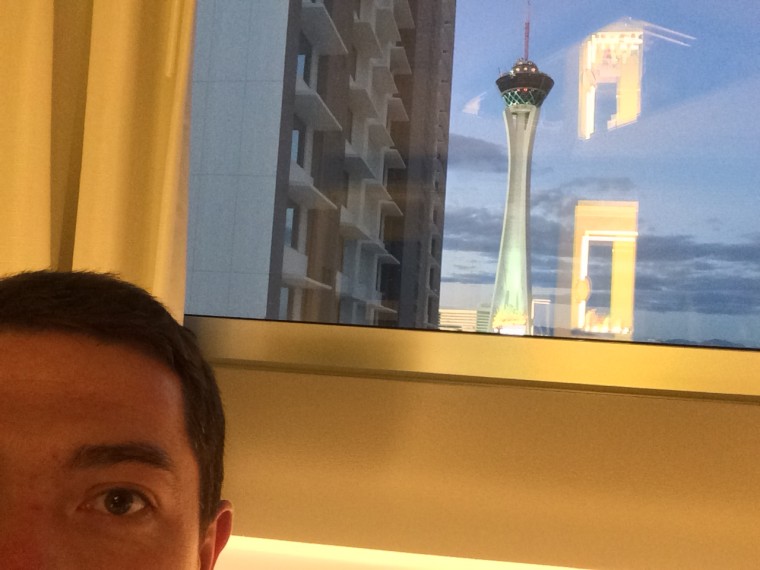 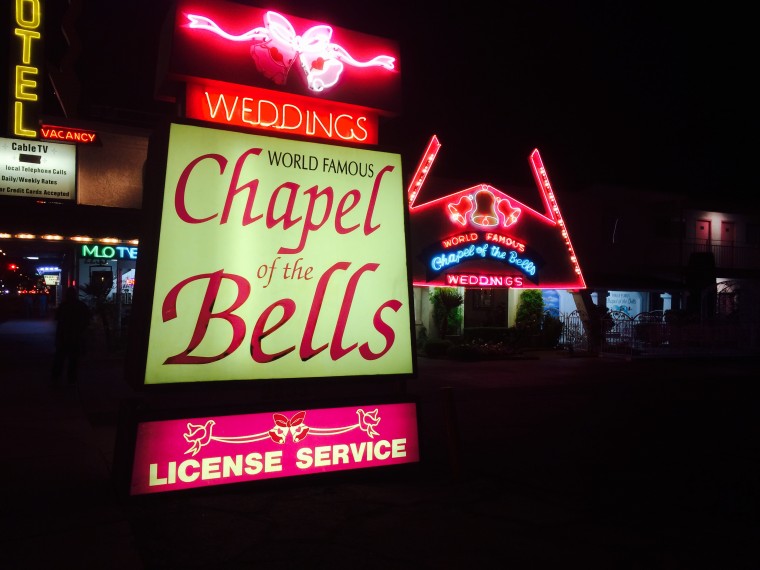 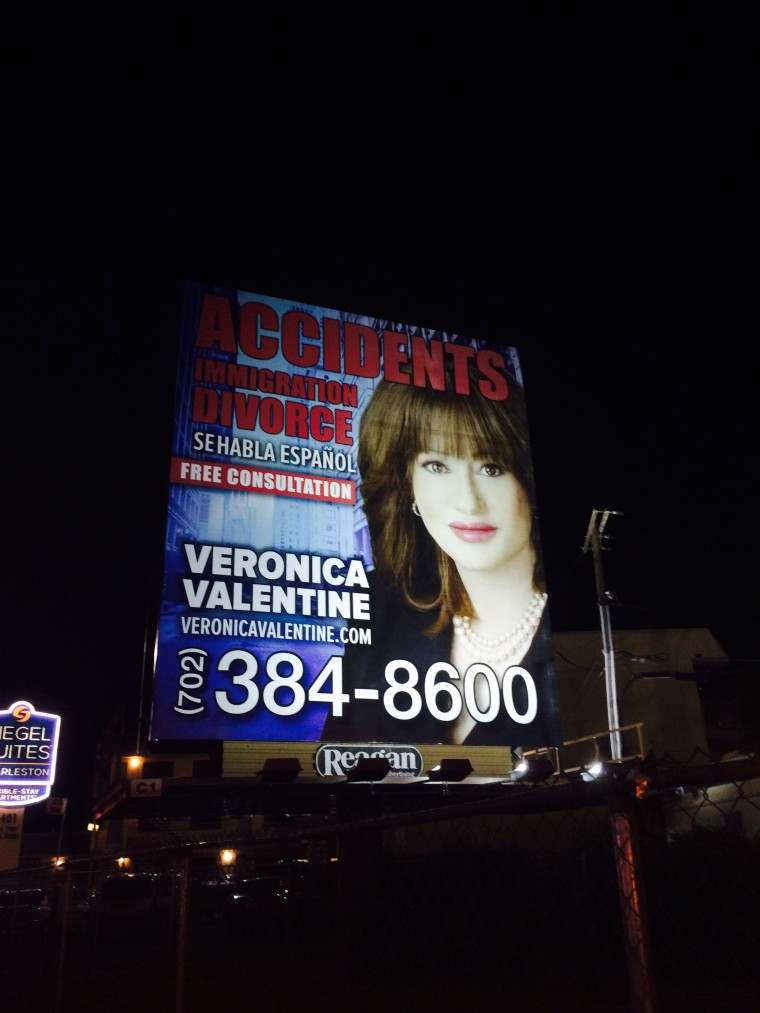 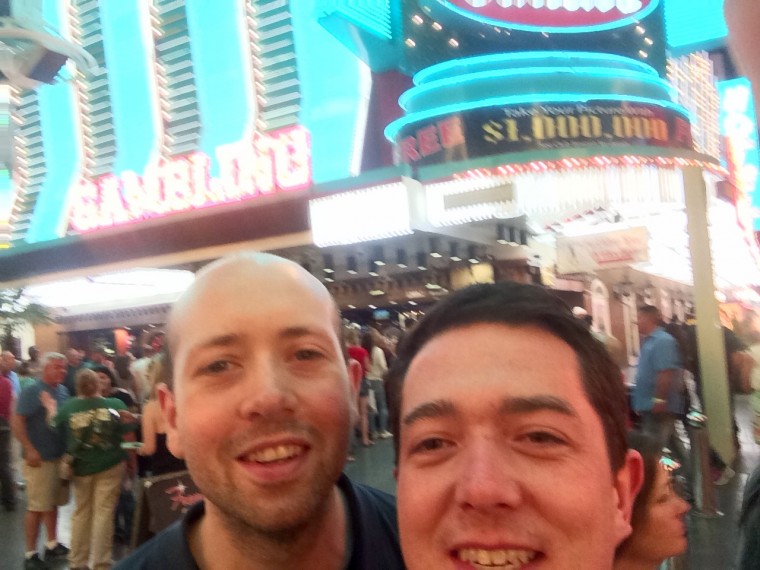 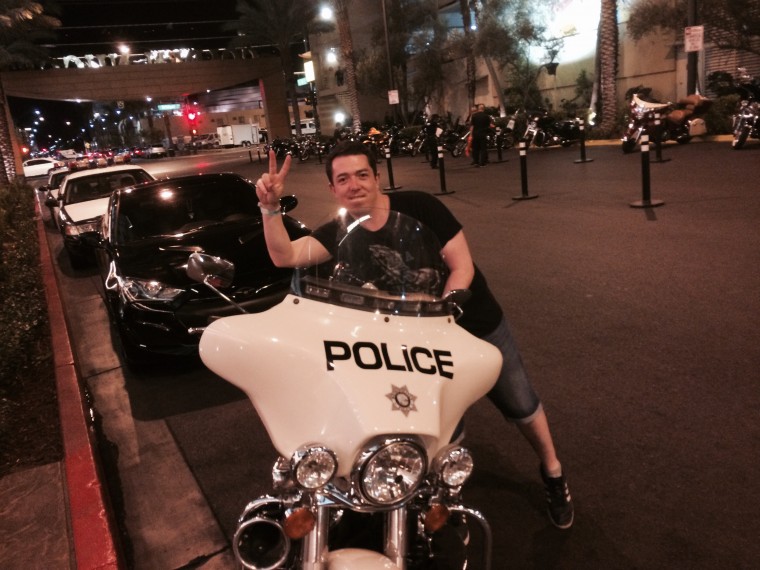 One thought on “Viva Las Vegas”