When we were planning the South American part of the trip we did a very rough plan of how many weeks we expected to be in each country and the rough route we’d take. We had hoped to spend a bit of time in Uruguay and Paraguay but weren’t exactly sure if we’d fit them in between Argentina and Brazil. Thankfully we did, as both are interesting countries and a good contrast to their bigger neighbours.

We spent a week in Buenos Aires (see John’s last post Here) and on the first day we decided to research options on how to make it east over to Uruguay’s capital, Montevideo. Distance-wise it looked about the same effort as getting from Dublin to London, but given how expensive Argentinian flights are, the boat+bus was the only option for us at about €70 return each.

It was a Saturday when we checked out of our lovely Airbnb and took the subway to the ferry terminal. After spending a week in one place we are always reminded of how heavy our backpacks are and have the same conversation – “there must be something you can throw out?!”. The answer is always the same – “maybe my one pair of jeans but nothing else really I think…”. Without fail we say this every two weeks. John finally went through my backpack the other day and concluded the same six months later. Those jeans are finally going this week – hopefully to a loving home in Myanmar. 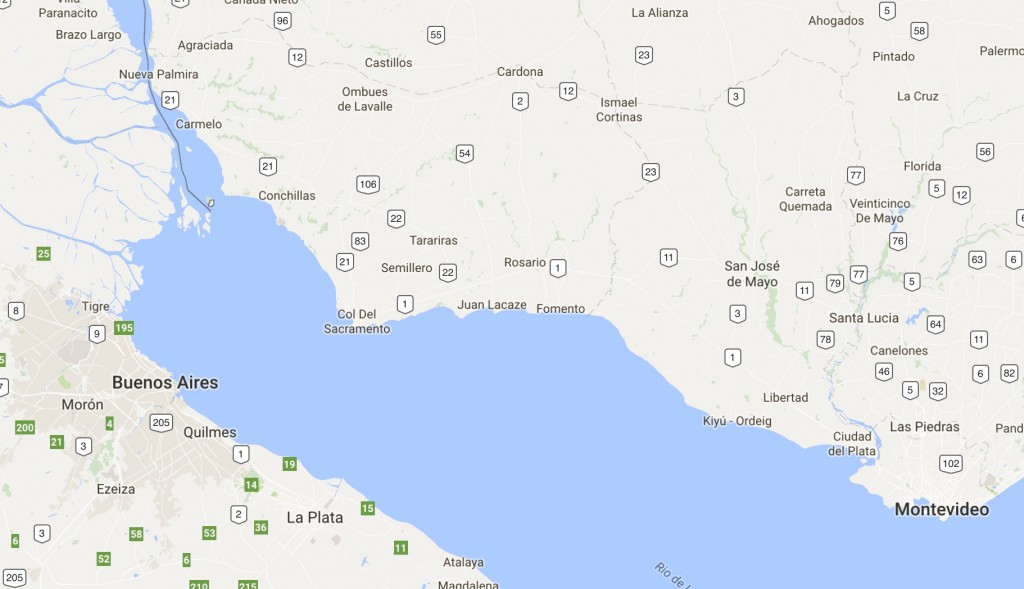 The high speed ferry was like the Dublin to Holyhead route. Took about 90 minutes on a comfortable boat which left from Buenos Aires and docked into Uruguay’s Colonia del Sacramento. We unfortunately didn’t get to see the old port town as like pretty much everyone else we took the smooth transfer from the ferry to a ton of coaches waiting outside and completed the final leg of the journey – three hours to Montevideo. 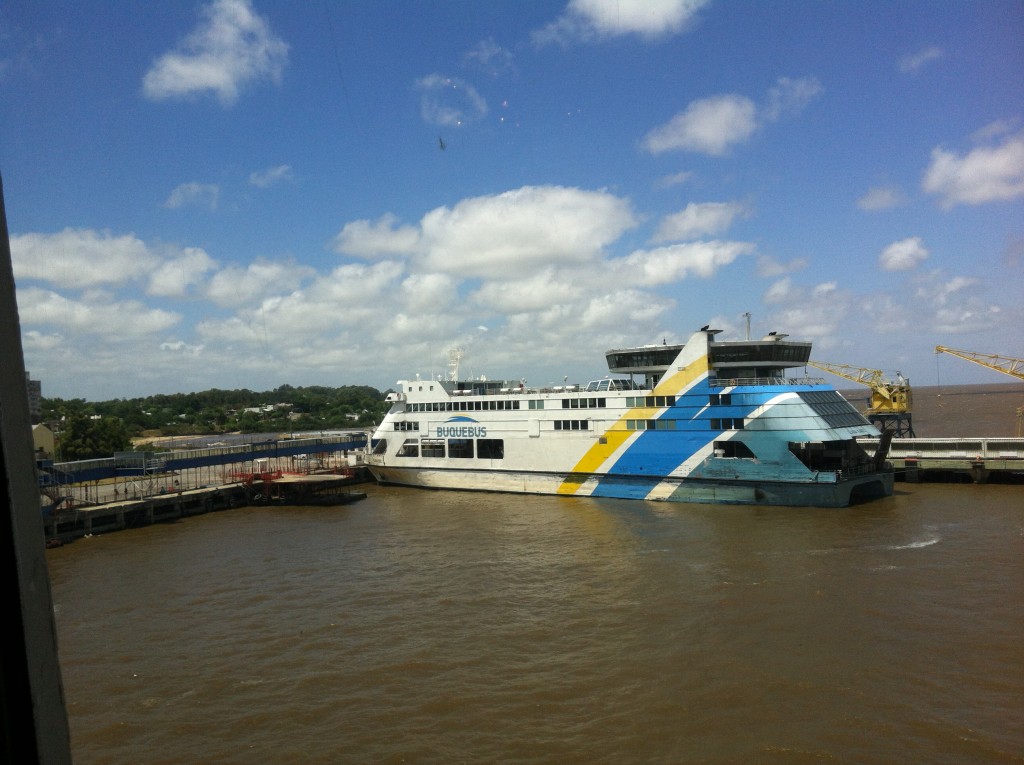 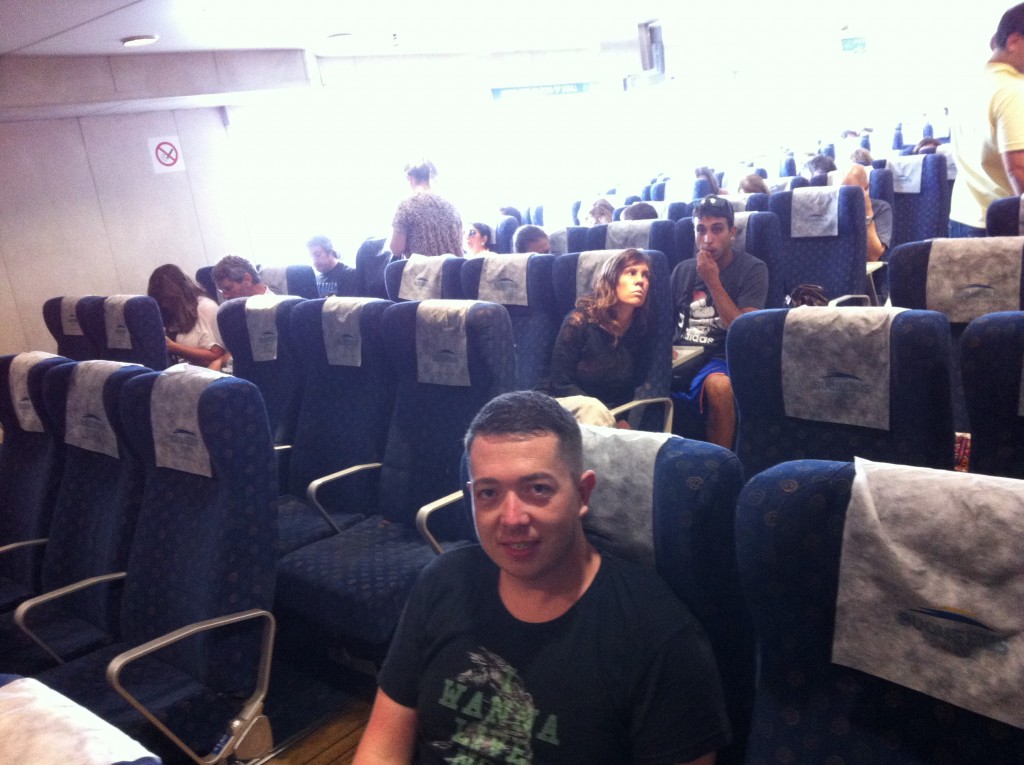 Before we made the trip, I’d read small bits about Uruguay that intrigued me. It was one of the richest South American countries and has been the best economically for the last while. Since gaining independence in 1828, it has gone through its own struggles between elected presidents and military dictatorships (what’s new in South America!). The current president was even tortured during one of the military coups but came to power following the swing to the left in 2005. Since then there has been big change in the country. It signed progressive trade agreements with the USA; became the first Latin America country to recognise same sex civil unions in 2008; legalised marijuana a few years ago and also did the same with abortion. Our Lonely Planet guidebook, citing their last census, says that 17% of the population classify themselves as atheist/agnostic, and another 23% ‘believe in God but without religion’. I doubt the Irish census will produce a similar result this weekend!

Before I jump into what we did in Montevideo, the other parallel that we felt was that Uruguay is probably like visiting Ireland for non-European tourists making the trip after being in the UK. Same physical distance, same language, people look fairly similar enough and Uruguay is also a big beef producing country! But the people did seem different – maybe a bit more patriotic and progressive than the Argentinians. Or maybe that’s the proud-smaller-country-syndrome kicking in! We only spent three days there but there was something about it.

We booked three nights in Montevideo, though we probably would have spent more time if accommodation was more reasonable. It was up there as comparably our most expensive in South America. The ups and downs of visiting richer countries! We landed off the bus in a western mall which coupled as their central bus station and got a city bus to their central square, Plaza Independencia. There were a lot of football fans milling around and it was obviously a local derby by their sporting rivalry towards each other.

The Airbnb we booked couldn’t have been more special. It was on the 7th floor of one of Montevideo’s most historic buildings overlooking their national focal point, Independence Square. The building, Palacio Salvo, was constructed in 1928 and was originally intended to be a hotel, but this plan got shelved and it’s now a mix of offices and apartments. At 100 metres, it was the tallest building in South America for decades and the architect built a replicate of it in Buenos Aires. It’s a tourist attraction in itself and we just walked straight into reception and picked up the keys which were left for us. The building needed a good refit inside but it had old faded glamour as we walked down a corridor with doors that looked like they led to individual offices. Maybe they once did, but 713B was our one-bed apartment. It was more than comfortable for a few days, but the wow moment came when we opened the shutters to see a view into the square below as sunset was just beginning. There’s nothing better than a few beers and a good sunset. This time in the setting of a wonderful square in a new country. 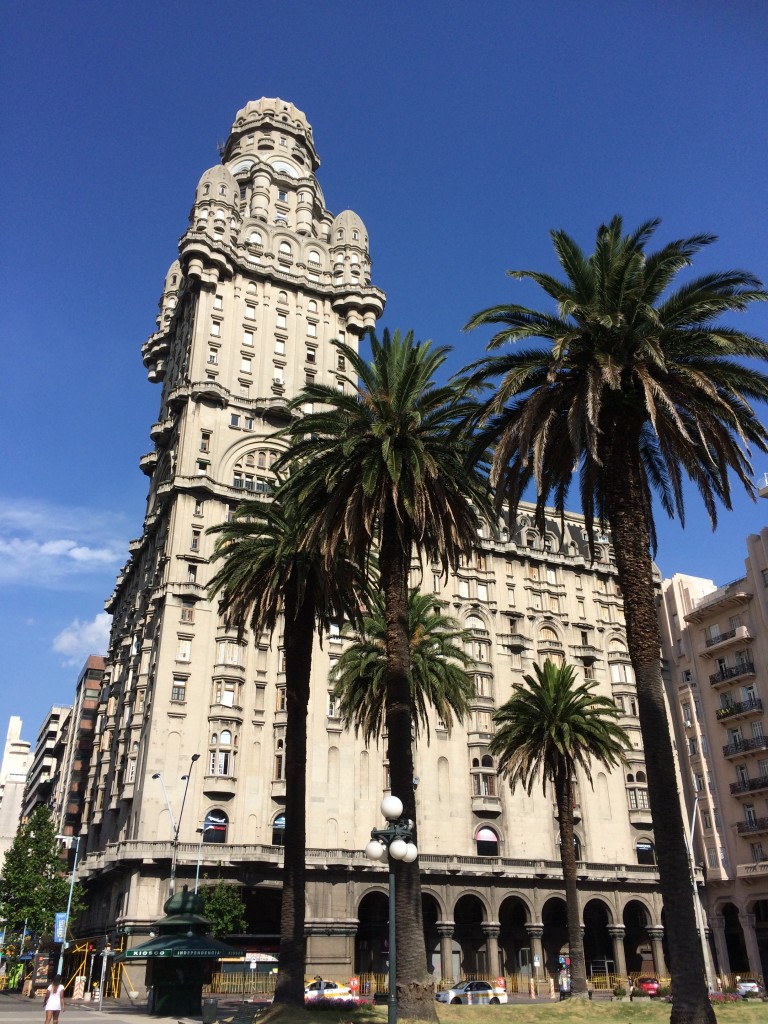 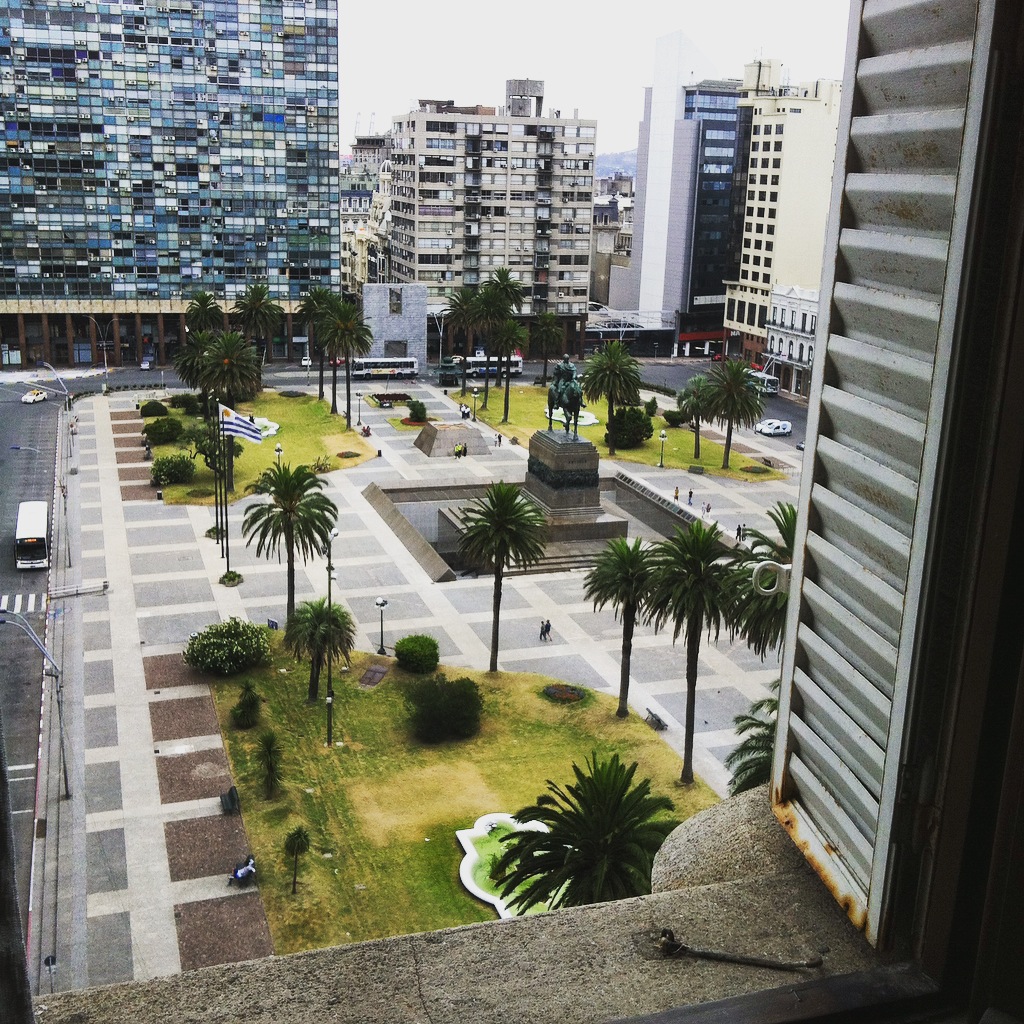 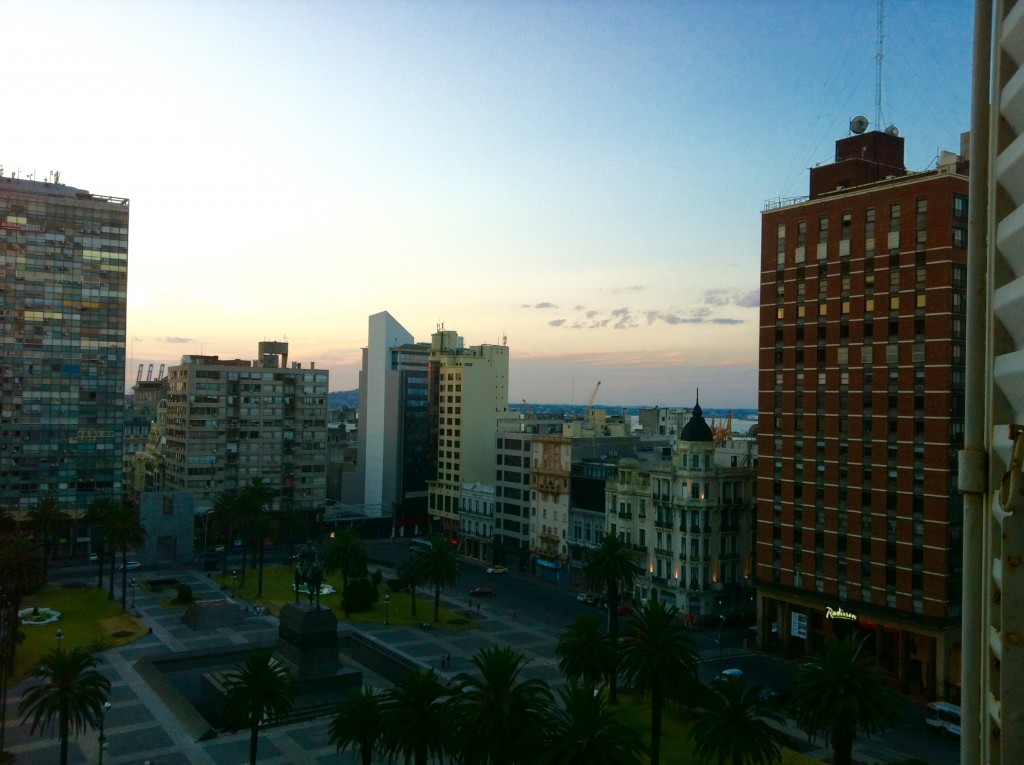 It was a Saturday night and the centre of the city seemed quite dead. With some new found energy we ventured out about 11.30pm and had a walk around. We found a few bars that opened out onto a small street off the square that was like a mini Temple Bar. It even had an Irish bar. We ordered some beer and watched the street life as people moved between the bars and a club that looked like it wouldn’t get going till well after 3am.

We started off Sunday by visiting Artigas’ mausoleum which is in a purpose built bunker under the square and directly below a huge iron statue of him riding a horse. South Americans know how to commemorate their Independence struggles and heroes. This was probably the most imposing and best monument we’d seen the whole trip. The chamber was eerie and a welcome retreat from the sun outside. Inside were two guards who continually stand by Artigas’ ashes 24/7. On the wall were significant dates from his birth to Uruguay’s independence and to his ultimate death in 1855. 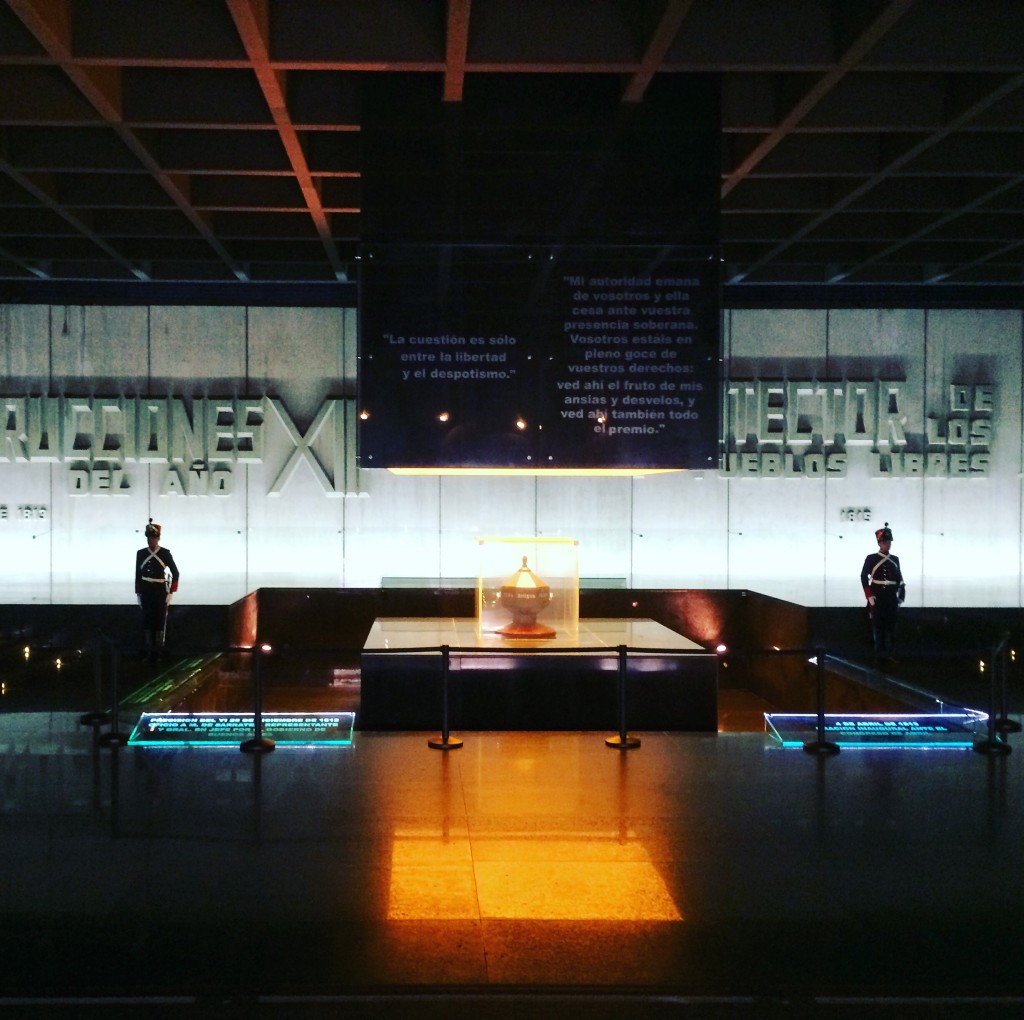 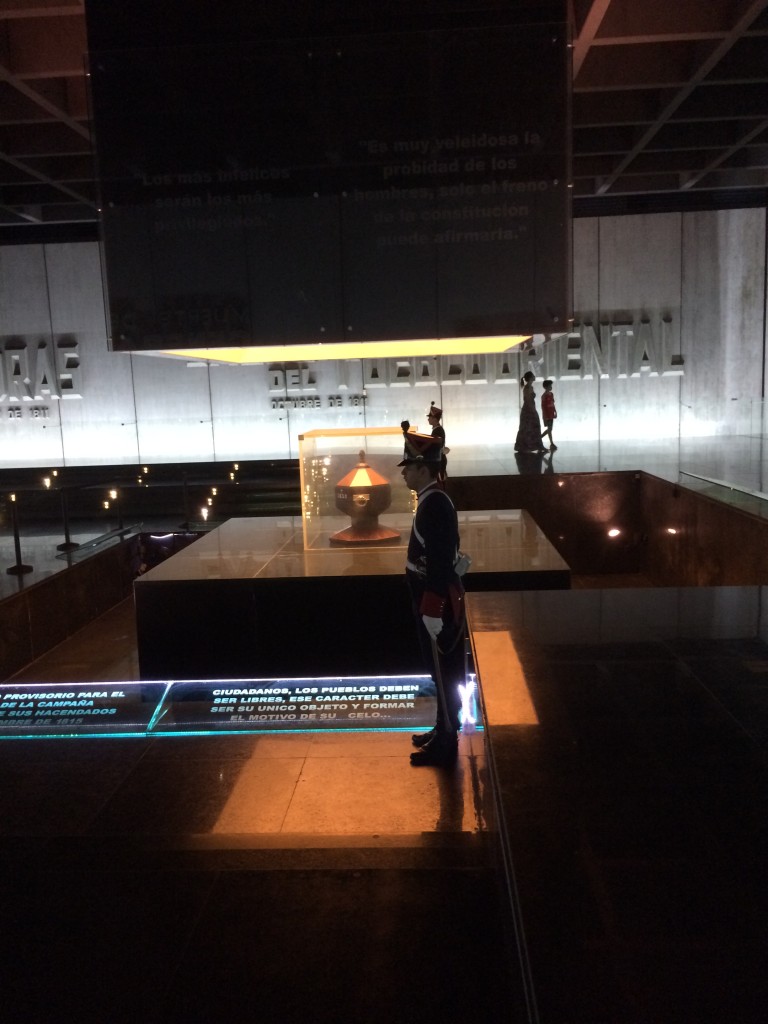 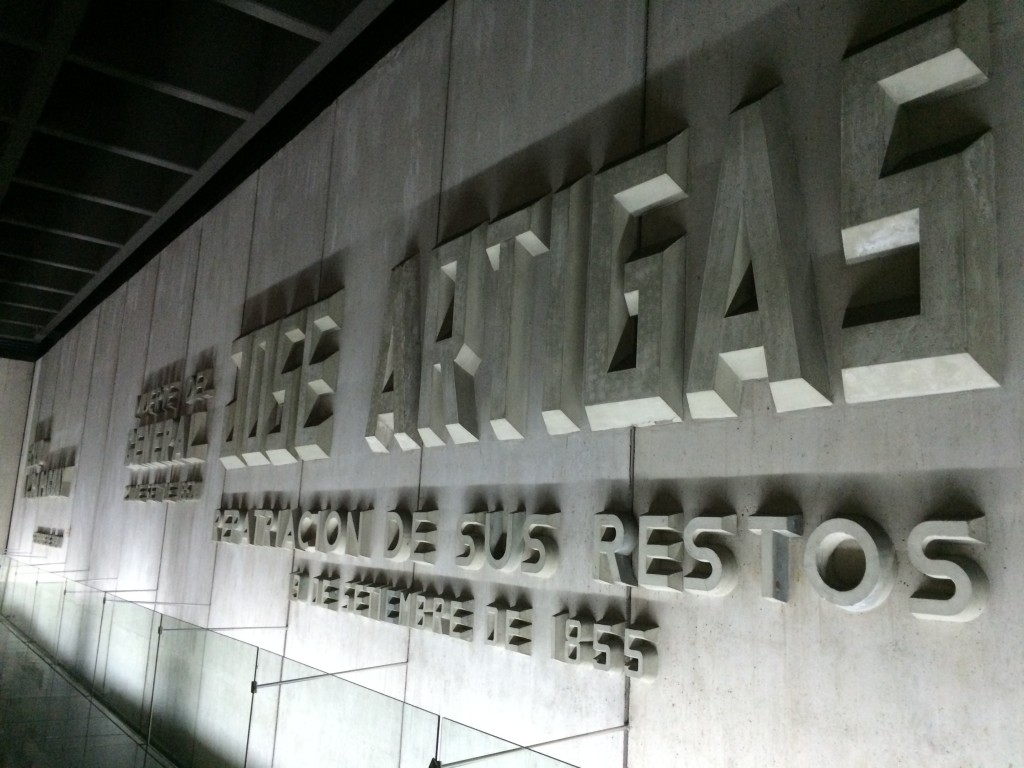 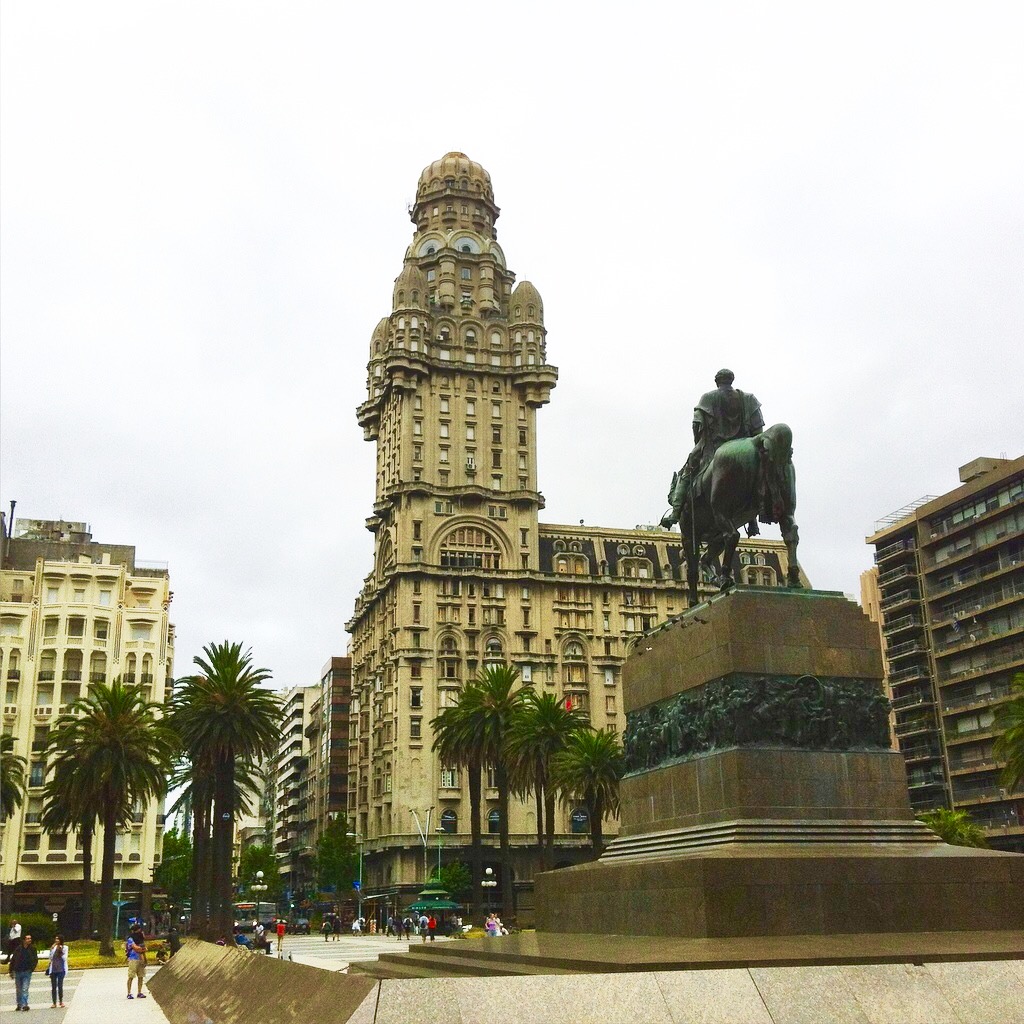 Next we walked through the old town and around the coastal part of the city centre which looks out onto the Atlantic Ocean. We were getting closer to home! I think we were a bit late for the central food market as it was nearly closed but there were some lovely old buildings and squares as we walked around. But this part of the city was again very very quiet – probably due to it being a Sunday. Maybe the Uruguayans are religious after all! The only two sets of people we saw around were some shady characters who looked to be on something, and then as we got to the other side of the coast there were loads of people trying to catch fish along with families out along the small beach stretch. Another spectacular sunset that evening. 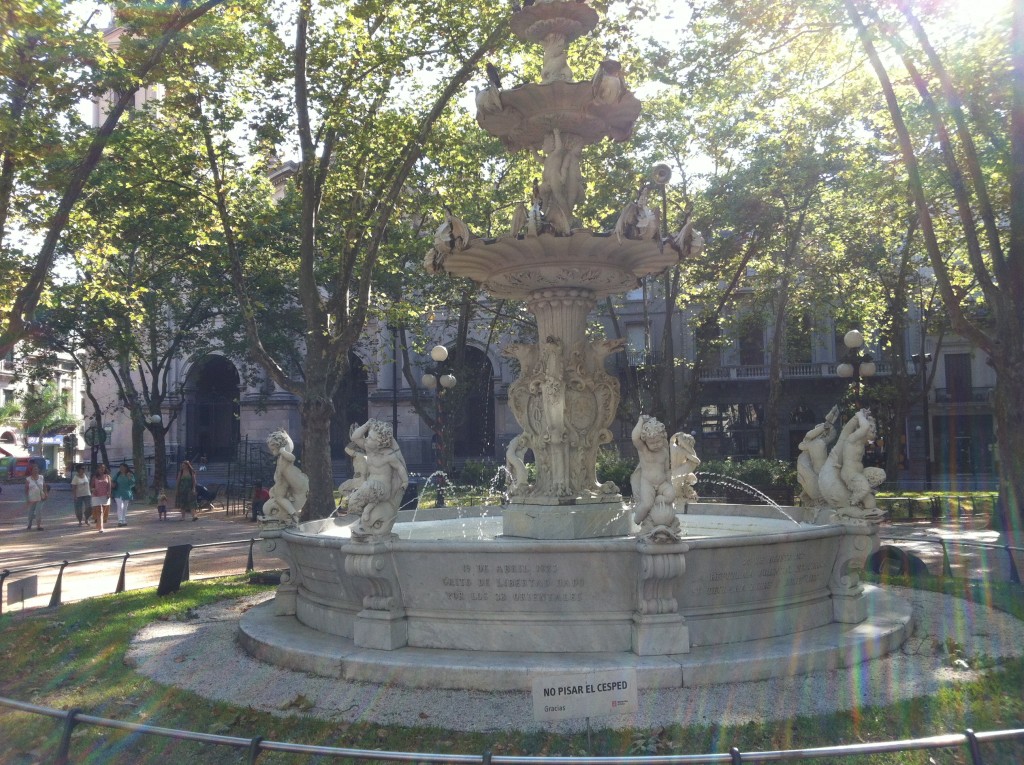 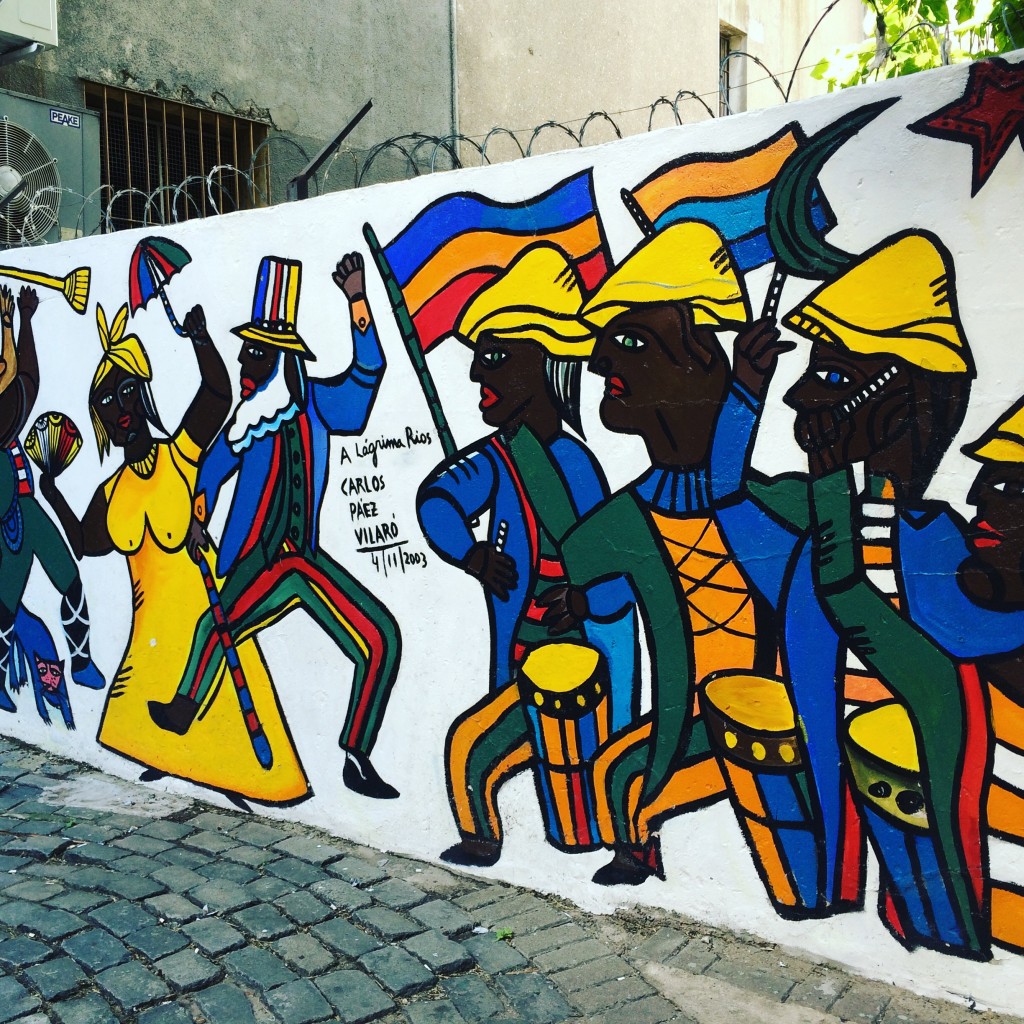 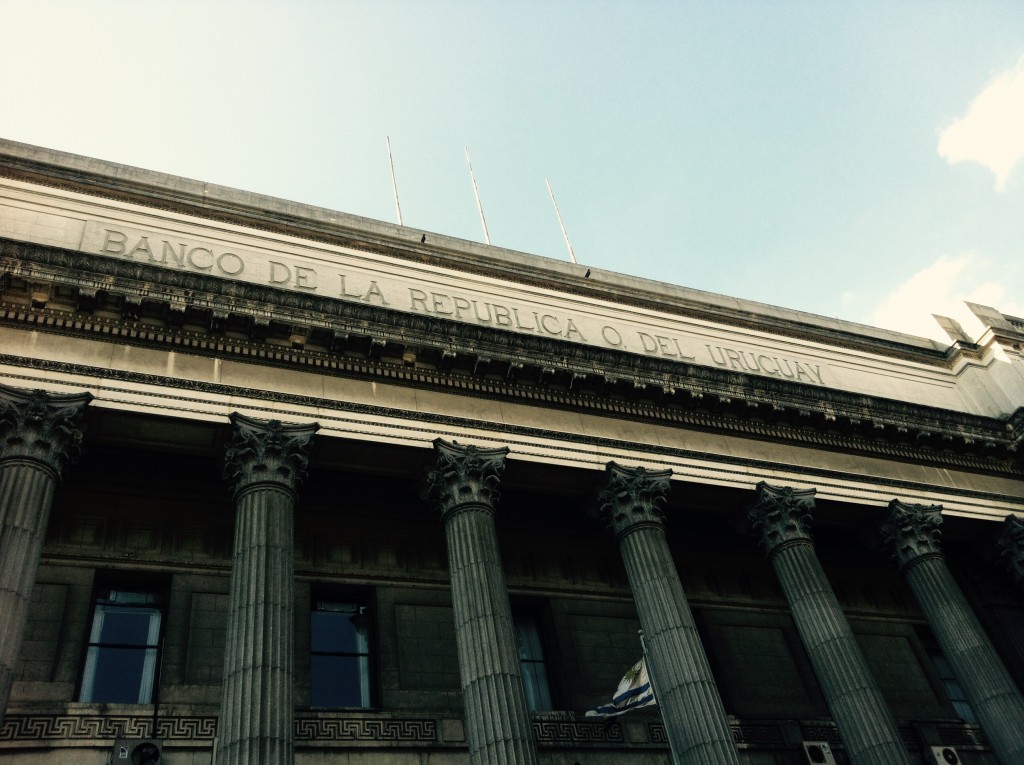 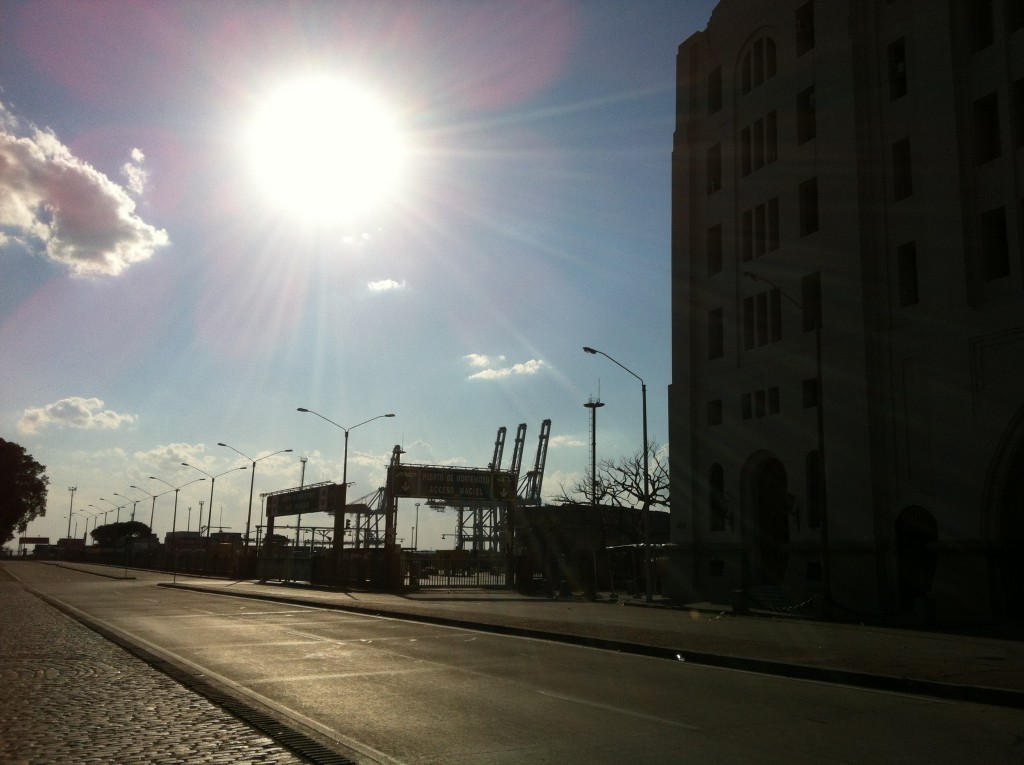 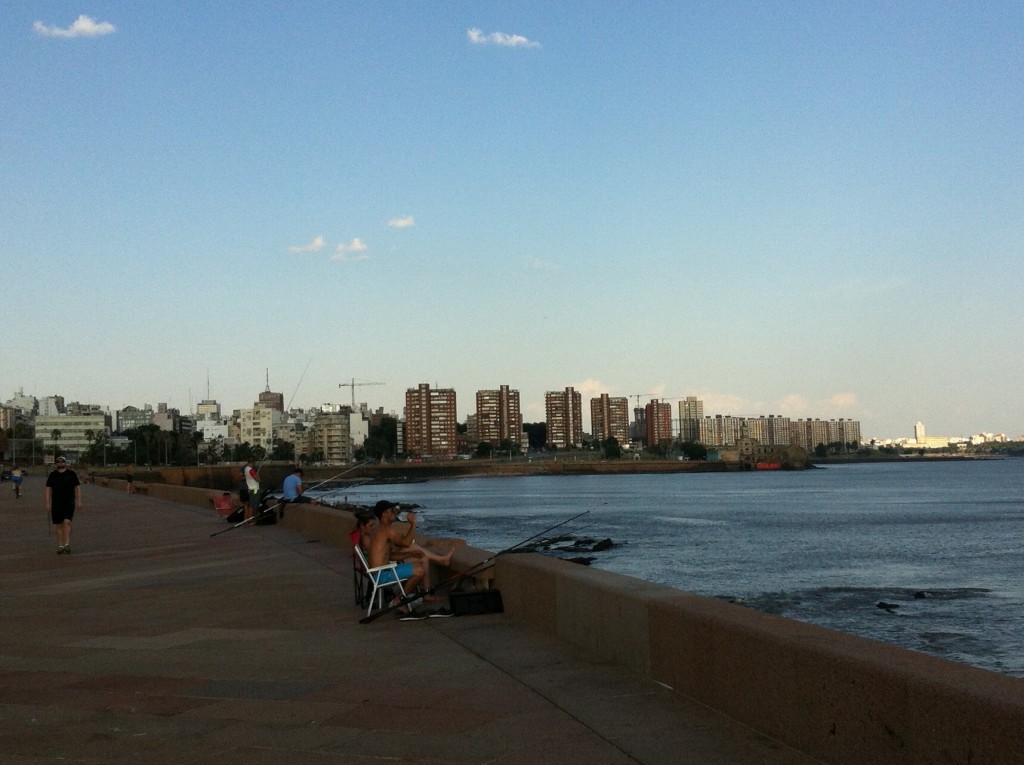 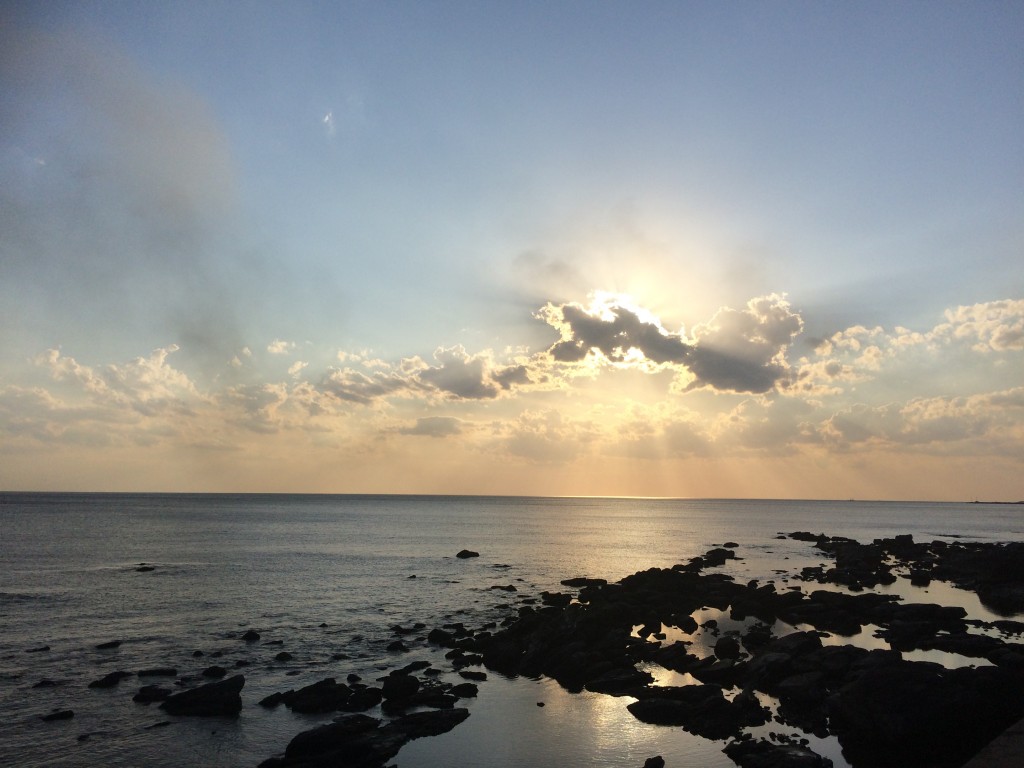 On our third and final day we visited the Palacio Legislativo – their parliament building. Probably due to my love of politics, architecture, history, and the drama of all three, we have visited quite a few parliament buildings on various trips. Uruguay’s parliament didn’t disappoint in the least. We had caught a glimpse of it on the bus into Montevideo. A huge imposing neo-classical building situated on a high position in the city with a very busy traffic roundabout on all sides. We headed for the daily tour at 3pm, which was actually split in two, one in Spanish and one in English. We arrived up and tried to get in the entrance for elected officials. Not so fast. We went around the other side and paid our €2 entrance fee and waited with a few other Brazilians in a side corridor. When they gathered everyone for the start of the tour we were the only ones for the English one, our private tour. 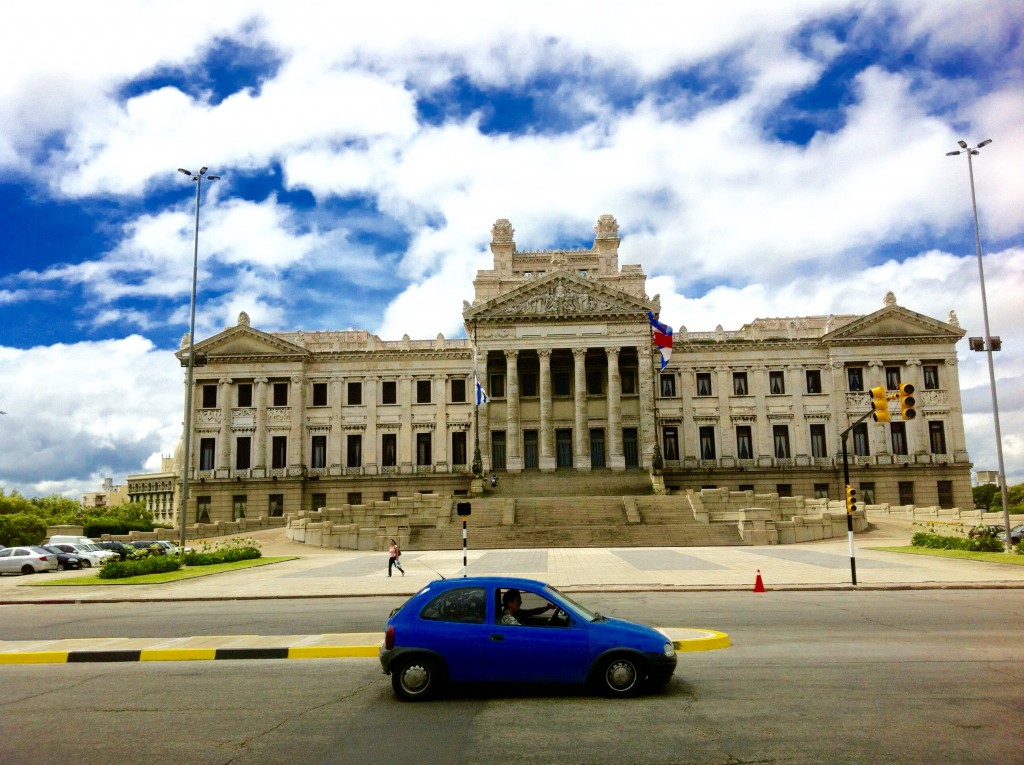 The young lady in her 20’s, whose name I unfortunately can’t remember, was super-nice and spoke perfect English with an America twang. She used to work with tech start-ups and still does on the side. But when they advertised 15 new positions in the parliament building she applied and came through a lottery system out of thousands vying for the chance. She said it was a stable and fairly well paid job in Uruguay.

The actual building was completed in 1925 and took over twenty years to build. Like a lot of other imposing and stunning buildings of its time, it takes its inspiration from the Ancient Greek way of building design. Straight lines, perfect symmetry, grandeur and exquisite sculptural pieces straight from the Acropolis. We walked around the whole building and got shown into the debating chambers as nothing was happening during their summer holidays. Our guide was intrigued about Ireland and how we do things – all of which was pretty similar to Uruguay. Except they have an amazing building and we have Leinster House on Kildare Street. Enough said. 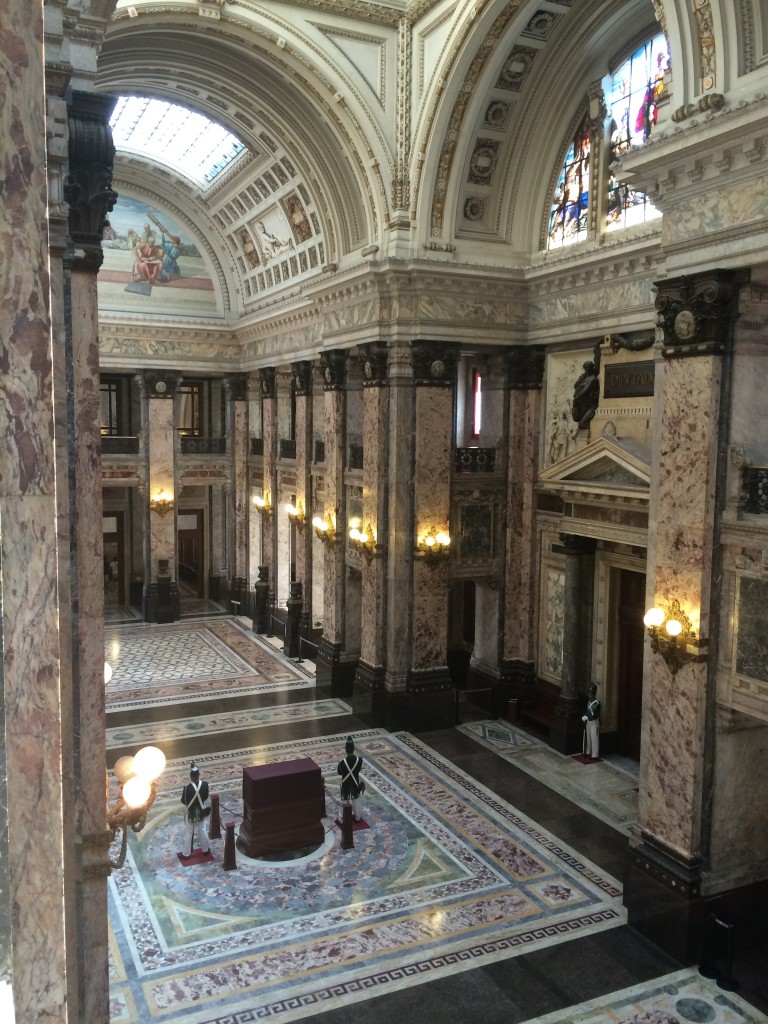 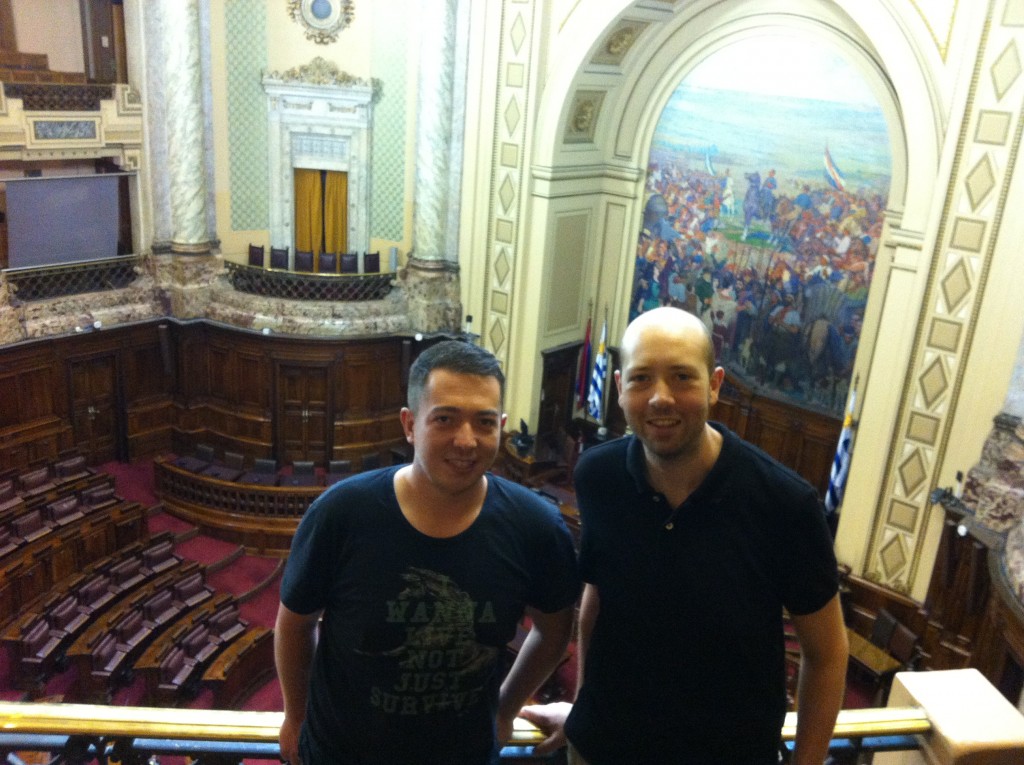 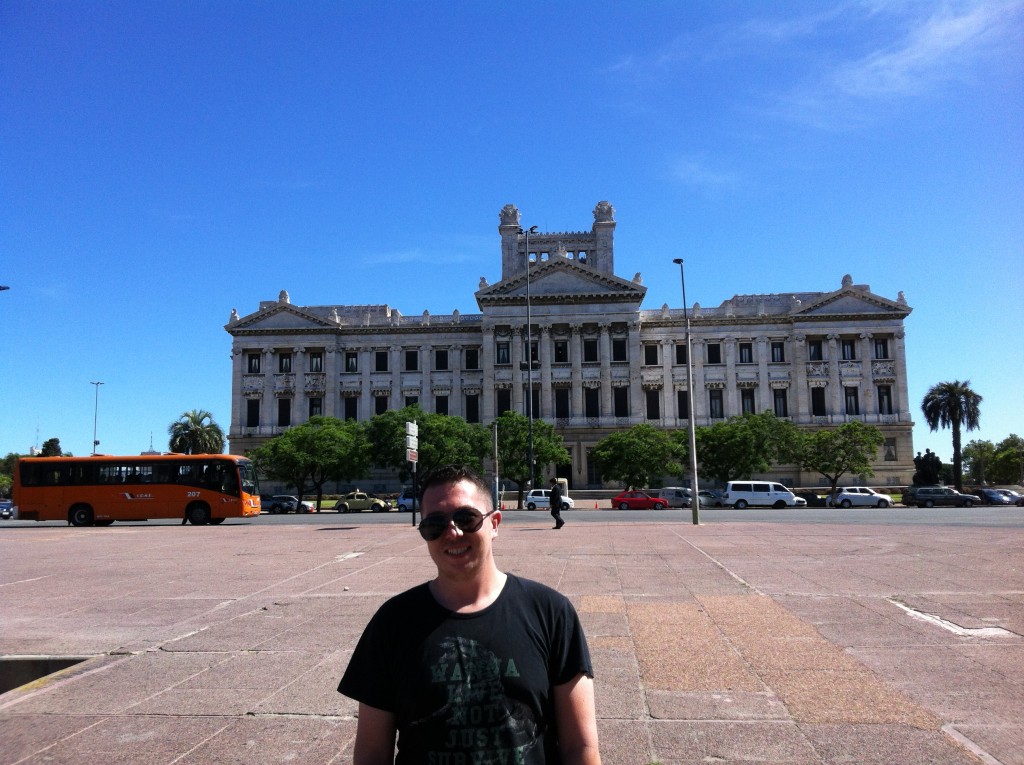 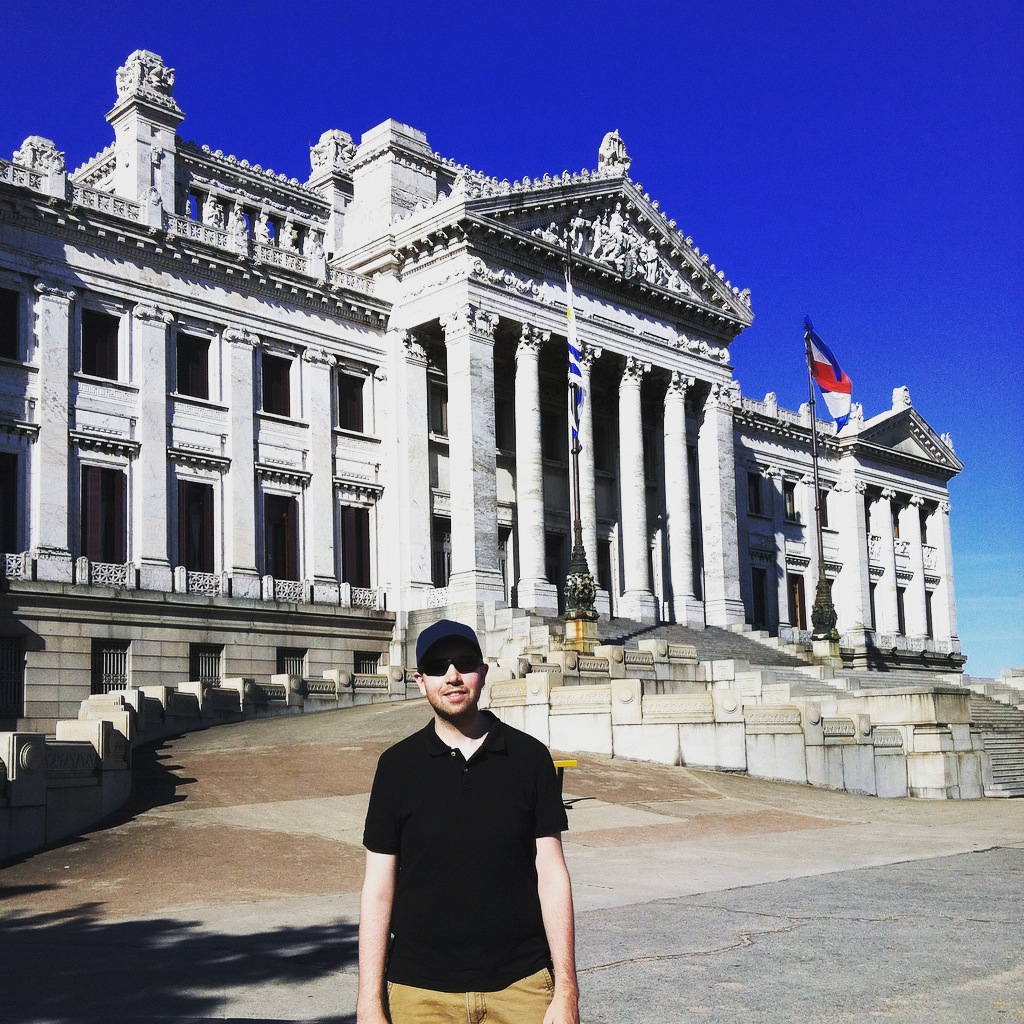 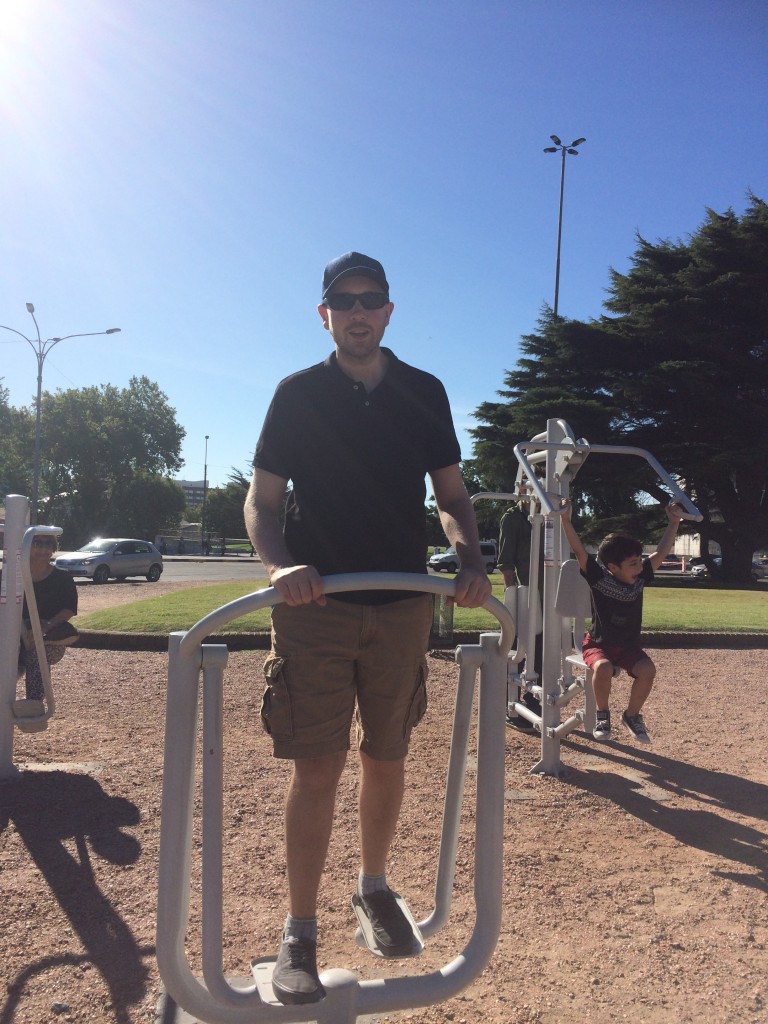 Afterwards we grabbed some lunch in the Montevideo fruit & veg market which was a few blocks away. The building looked recently renovated and mirrors what Dublin is hoping to do with Smithfield Market in keeping the old stalls and sellers, but in a more modern expanded space. They also had a food court and we got yummy falafel wraps. 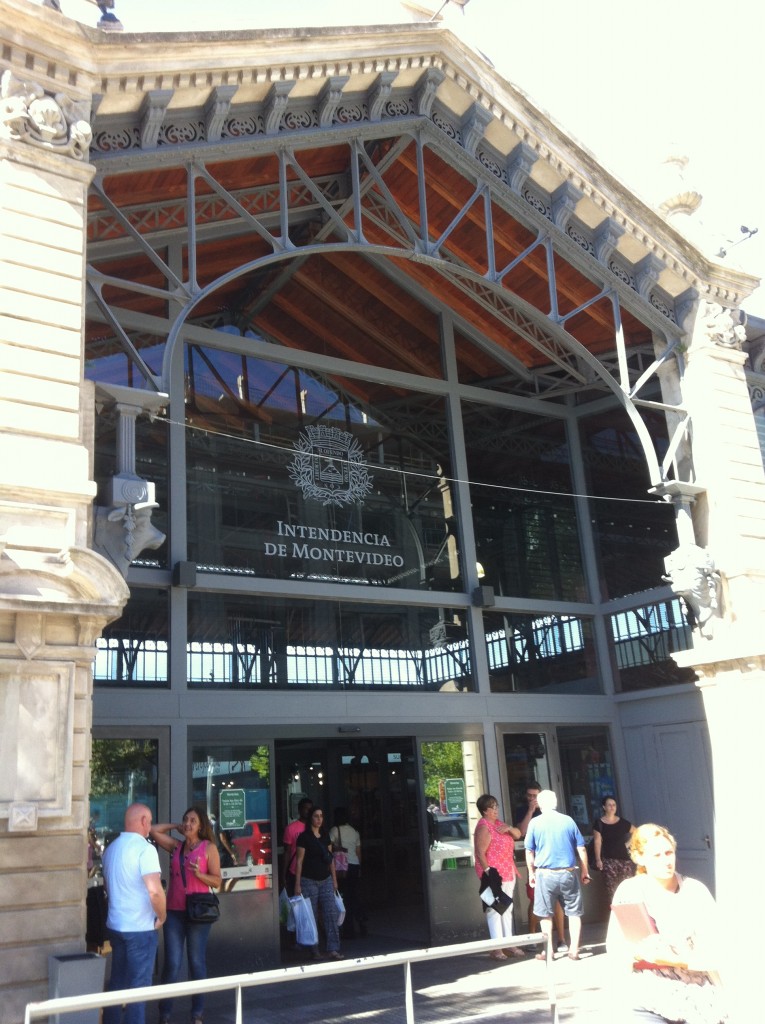 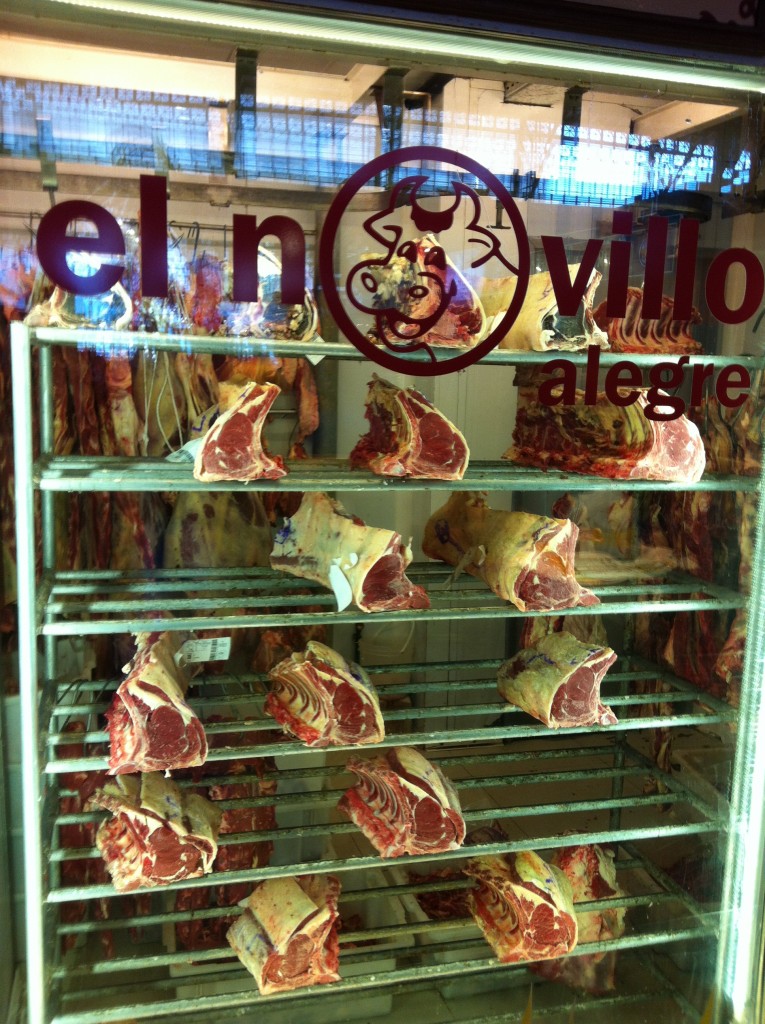 Claudio who owns the Airbnb apartment met us there the next morning for check-out. He was a lovely guy and sent us happily on our way to do the return three hour bus trip and catch the ferry back to Buenos Aires where we were staying for another two nights.

All was going smoothly as we got off the bus at the ferry terminal when we had a minor panic moment. We were weighing up whether it was worth changing our Uruguayan Peso there and then or keeping it till later in the trip. We had just taken out about €200 worth of Argentinian Peso before we left for Uruguay but when we checked the usual places in our bags it was nowhere to be seen. John thought we might have left it under a book at Claudio’s place before we went out on our ‘Temple Bar drinks night’ but Claudio couldn’t check for two days as there were new guests already in the apartment. We though all was lost and felt sorry for ourselves on the boat back. In the scheme of things it wasn’t huge money; just a few nice Argentinian steak dinners we had been missing in Montevideo.

We waited the two days before Claudio could check for us, but just as we were packing to leave BA, I miraculously found the money in a side pocket of my big rucksack. We felt like we won the lotto! Plus stupid me for not remembering it was there. I blame the booze that night as just before we left I suggested we leave the money behind and obviously stuffed it in a never to be found again place. Another plus from the situation (if there was a plus in the first place) was that John found some Bolivian notes we didn’t even know were missing. So it was a double lotto win that day.

We celebrated with some juicy steaks and more beer that night when we arrived in Puerto Iguazù – our next blog coming in a few days.