The rest of New York

So it’s Day 7 on the adventure (this was written yesterday!) and we’re half way through the flight from New York to Las Vegas – our next stop. Busy Delta flight but plane is comfy with backseat tv screens. The coffee they serve is Starbucks Coffee (!).. believe it or not it’s my first of the trip. Wherever we go Lattes are upwards of $3.50+ so I’ve been having more filter coffee…americanos are grand. No huge difference from home prices. I’ve just been listening to podcasts and following the scenery down below. John kindly gave me the window seat! Looking down brings me right back to the late 90s when I flew across the States listening to the air traffic control audio channel to find out where we were flying over. I remember being amazed by the flatness and ‘nothingness’ of the mid west while looking down at all the grain-land farms and small towns. We’ll need to explore it another time. 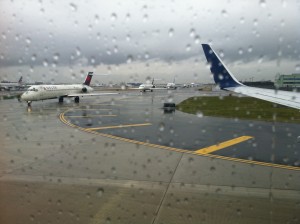 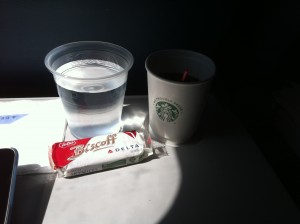 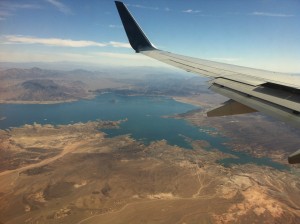 Back to New York. A place I thought I’d find hard to fall in love with. But I’ve been converted. It lived up to my imagination and more.Review Android Smartphone

After our drinking session last Friday (see previous post) we took it easy again in the morning. We planned to meet another friend, (American) Thomas, who I know from years ago. He ‘happened to be in town’ (love that American phrase) at the same time. What luck!

John & I walked towards Chelsea on the west side of Manhattan and walked The High Line. It’s a disused raised rail track that was due to demolished but was saved by the local community and has now been wonderfully turned into a public park from 14th to about 27th street. It seemed everyone else had the same idea on a sunny Saturday afternoon as it very busy, but still lovely. It was amazing looking down at the streets below and west to the Hudson River and all the new buildings going up in the Meat Packing District. It was crane-mecca. I thought there was no more room to build in Manhattan but I was wrong. I guess cities continually renew themselves. 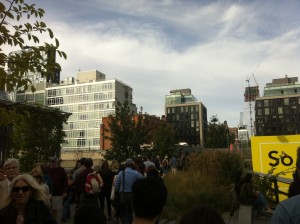 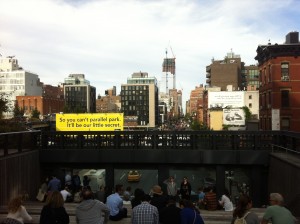 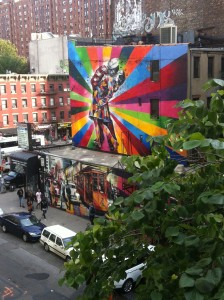 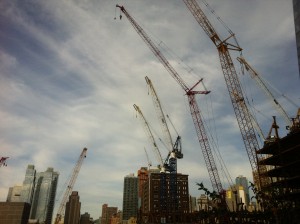 We then walked about 25 blocks north through midtown and up to the Rockefeller Center around 50th street. Traffic got crazier as we ventured up with loads of street closures to allow street markets to operate – NYPD at every intersection directing traffic. We were pretty hungry so checked out Chipotle which is a more upmarket-mexican-fast-food-restaurant-come-burrito-chain… contradictions all over the place there.. (just like Boojum in Dublin… though Boojum probably copied them). We checked out the Rockefeller Plaza and all the NBC building signs around. We got back on the subway and down to Chelsea where we had beers with Thomas and his two friends at an Italian eatery and an Irish Bar. Thomas is great – I hadn’t seen him for three years but it was like we were right back in the game straight away. We inter-railed around Ukraine together in the late 00s and he has done a lot of long travel stints before that he knew what was ahead of us. As he said, at the end of his seven month trip he was ready to do himself in. Hopefully we’ll fair a bit better! 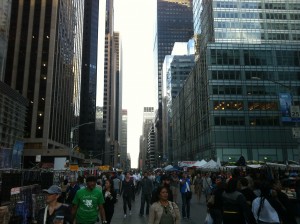 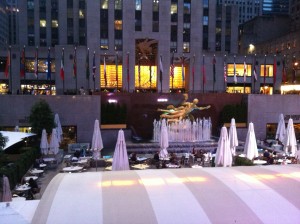 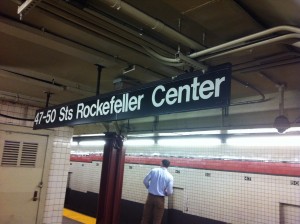 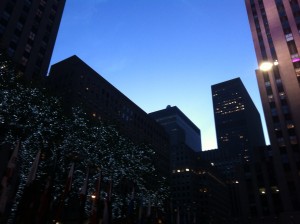 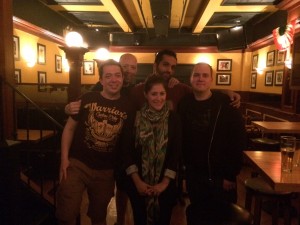 Sunday was Airbnb check-out day and we packed up easily.. no sign of Roxy this time. We gave them a good review online and they did likewise for us so everyone’s happy. It was a great spot location wise. We had arranged to meet Bill & Dan for our proper day together… starting with brunch in their regular hangout on Hudson St, the Hudson Hound. As I said to them, it’s so great spending time ‘with the locals’ and getting an insight into daily New York life. Let alone them being family! The brunch place used to be called Dublin 6 (yes Irish connections all over the place!) and we were greeted by an Irish waitress as we entered. You never miss the Irish accent and smile.

Given we were so late meeting them Friday, we thankfully got there 15mins early and sat ourselves down. Food was lovely and the Mimosa’s and Bellini’s flowed for me. We ended up staying for about 3-4 hrs chatting.. so many stories and interesting bits to share from an Irish and America perspective; politics included. Bill & Dan are family and I’m so glad we reached out to them a couple of months ago. Just shows what a business card from five years ago gets you! They looked after us so well (even on the days we didn’t meet up) and our time drinking with them all along 8th Av was brilliant. We made it up north of Manhattan to Broxville (right beside their place) and grabbed pizza and more drinks. It was interesting getting an overview of Bronxville from them, it’s a well to do suburb, great schools and lots of nice houses and greenery around. Very like south county Dublin and same distance to the city centre. We got back around 10pm and we were all wrecked so took an early night. (Unfortunately they had work the next day) 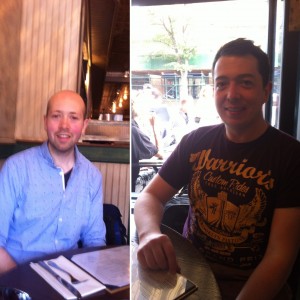 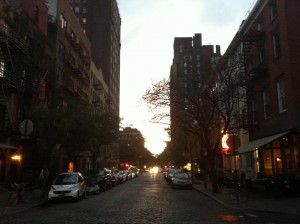 .
We woke up the next day (Monday) and I could feel a cold/flu coming on. They had gone to work so we just chilled again and watched American morning TV… basically happy celeb chat and loud opinion makers. Gotten love them. It does captivate you after a while. Blog post written and we were off into Manhattan on their local commuter train which was only 10 mins walk away. We got off at Harlem 125st Street which is the second last stop before Grand Central as “we wanted to explore a bit of Harlem”.. sure why not. Dan advised us that there was a subway station a few blocks away if we found it a bit rough.. and that’s just what we did. In retrospect we should have given it longer but we were hungry. Subway to 86th Street, quick bagel and we were in Central Park. Couldn’t believe how big it is and runners everywhere. There was even a large male group of runners who obviously belonged to the mandatory-no-tshirt-policy just out for their lunchtime jog. 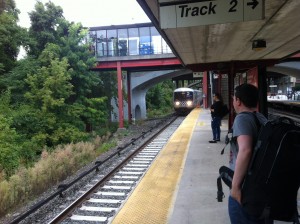 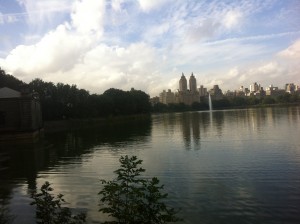 We went into the Met (Metropolitan Museum of Art) as I wanted to check out their Ancient Greek and Roman sculptures… the ones I studied in classical studies through a book in school. They were exquisite. I was fading quickly so we left after the modern art section (also great!) to buy paracetamol and water and rest in Central Park for a few hours. Sheep Meadows was so tranquil… large open grass space with high rises all around. All the New Yorkers seemed to be doing the same. Around 6pm we walked down 5th Av, via the Apple Store, and headed to see the Chrysler Building and the UN. All obviously on lock down with Obama, Putin and the Iranian President in town that day. We got burgers at ‘Five Guys Burgers’ in West Village (coming to Ireland next year I believe) and a quick drink at the Stonewall Inn bar where it all began. Fairly quiet, but it was a Monday. One guy watching Fox News on his iPad at the bar and a wrecked drag queen sitting at a table staring endlessly into space waiting to kick bingo off in a few hours. My cold had only got worse so we left after one and got the commuter train back to Westchester. 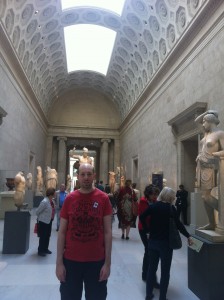 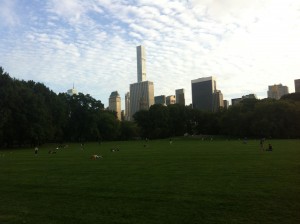 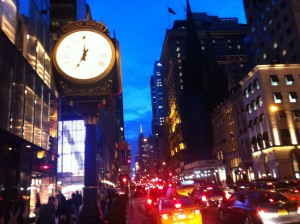 Yesterday (Tuesday) we left Bill & Dan’s around midday. My cold was (still is) bad but on the mend now thanks for the Ibuprofen Bill left out and Dan’s amazing homemade cold lemon water mix he topped up in the fridge – thanks again guys for everything!! It felt sad leaving after such a fun few days, but we’ll have to get used to it along the way. We now have friends in New York and renewed family connections!

We made it south and east over to Brooklyn where we spent our last day and night in NY. Every neighbourhood we’ve been to has felt so different with the people, buildings and pace of life. As John had read somewhere.. “it’s like the Berkley of New York” with its well-to-do bohemian-ish student feel. We walked along Atlantic Avenue, Brooklyn Heights (very nice residential area!) and out onto Brooklyn Heights Promenade to get stunning views of the Manhattan skyline at night, and they were amazing. Picture postcard. My feet were starting to get sore but we walked along the river front up to the Brooklyn and Manhattan bridges and then through the Dumbo area. We also wanted to check out Downtown Brooklyn on the way back – which is pretty much apartment and office blocks. We finally found a 7eleven for ‘Poland Spring’ water (it’s everywhere!) and we couldn’t pass a McFlurry in McDs next door. We got the ‘snack size’ which is like at home but they also do a Regular size that is huge.. like a medium cup drink size. I’ll be getting one of those soon 😃 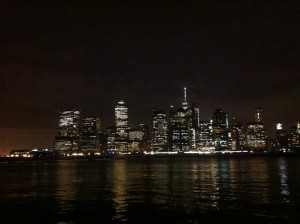 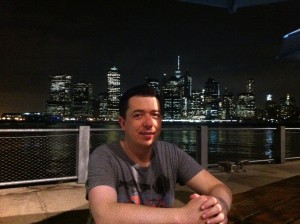 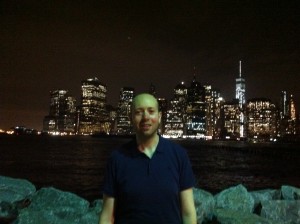 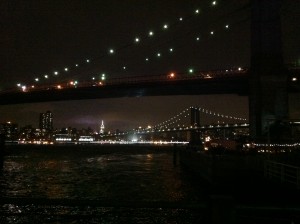 This morning we had an 11am flight from JFK and made it in good time with the subway and Airtrain. Strange leaving our first stop but on we go. Landing into Vegas in less than an hour and then a hotel shuttle bus to the SLS Hotel where we’re staying for four nights. It’s seemingly a bit of a young preppy party hotel with their ‘spring break style’ pool parties each weekend. We’ll see how we get on. They have a gym to pump up beforehand. Bar the tripadvisor reviews, I’m sure it’ll be great. 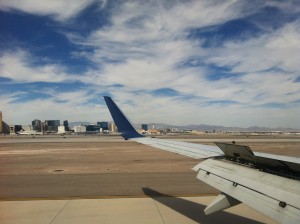 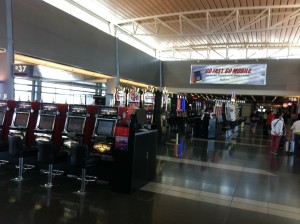