It was time to leave Rio and we had five days to get to São Paulo before our flight to Chile. Our lonely planet guide suggested a stop off point in a town called Paraty which was exactly half way so off we went. Paraty is right beside the sea along the Costa Verde (Green Coast). It was a five hour bus journey from Rio and the bus was pretty comfy. This time a day bus so we got to take in the amazing coastline and lush green landscape as the bus followed the Atlantic’s edge. 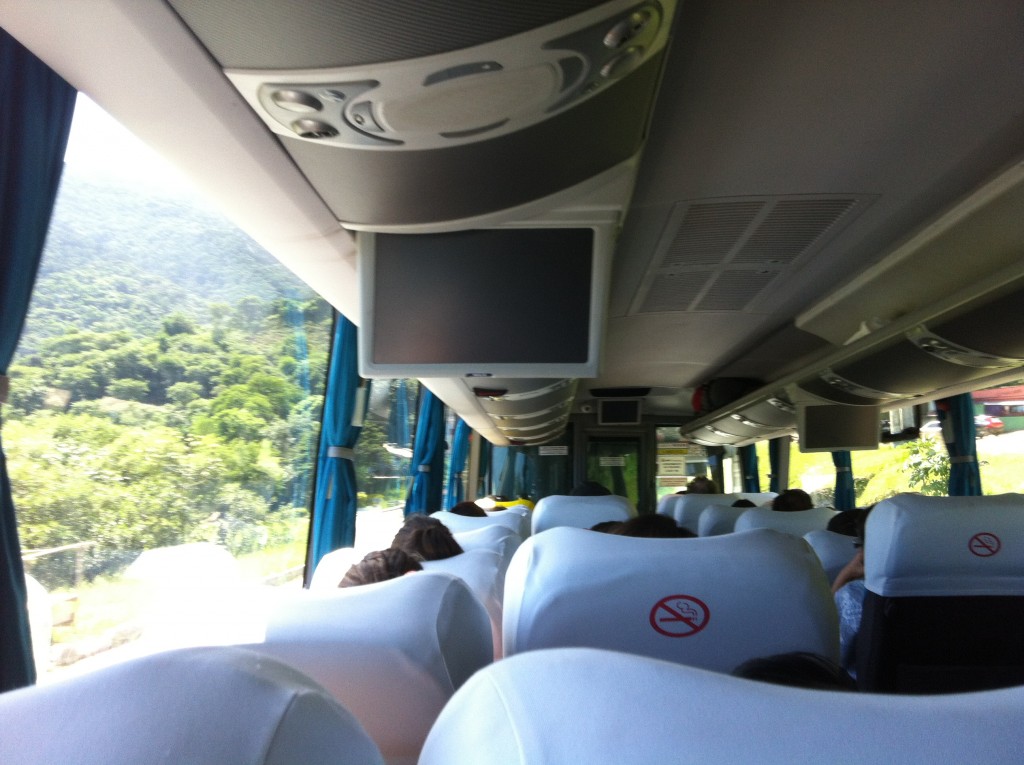 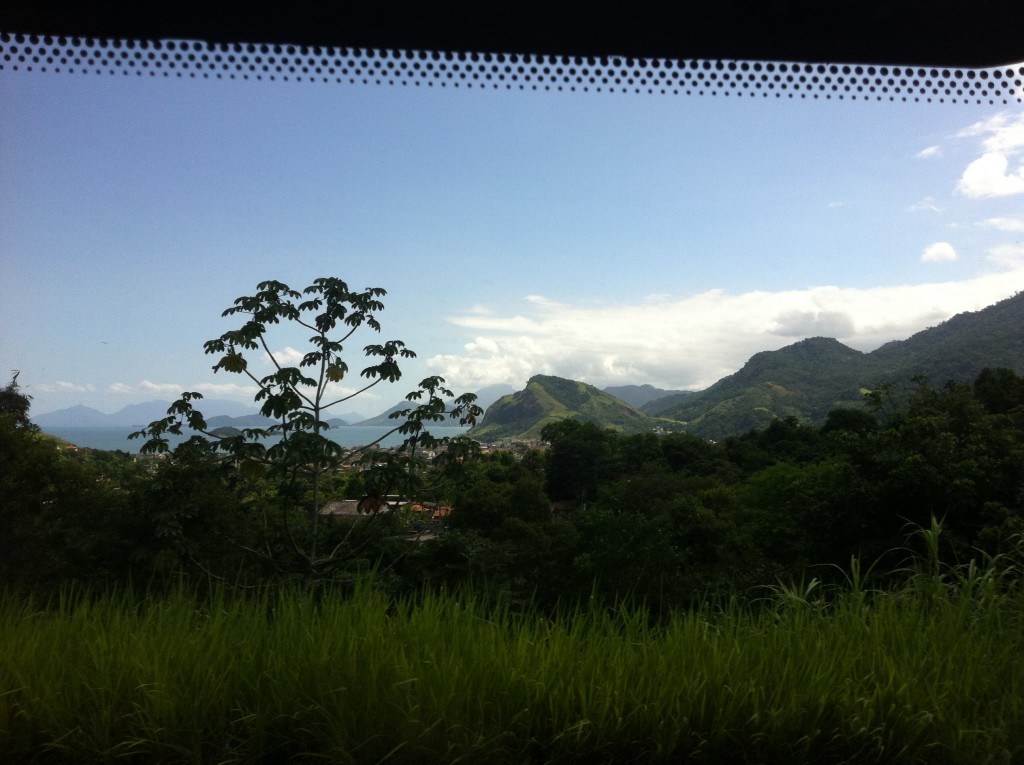 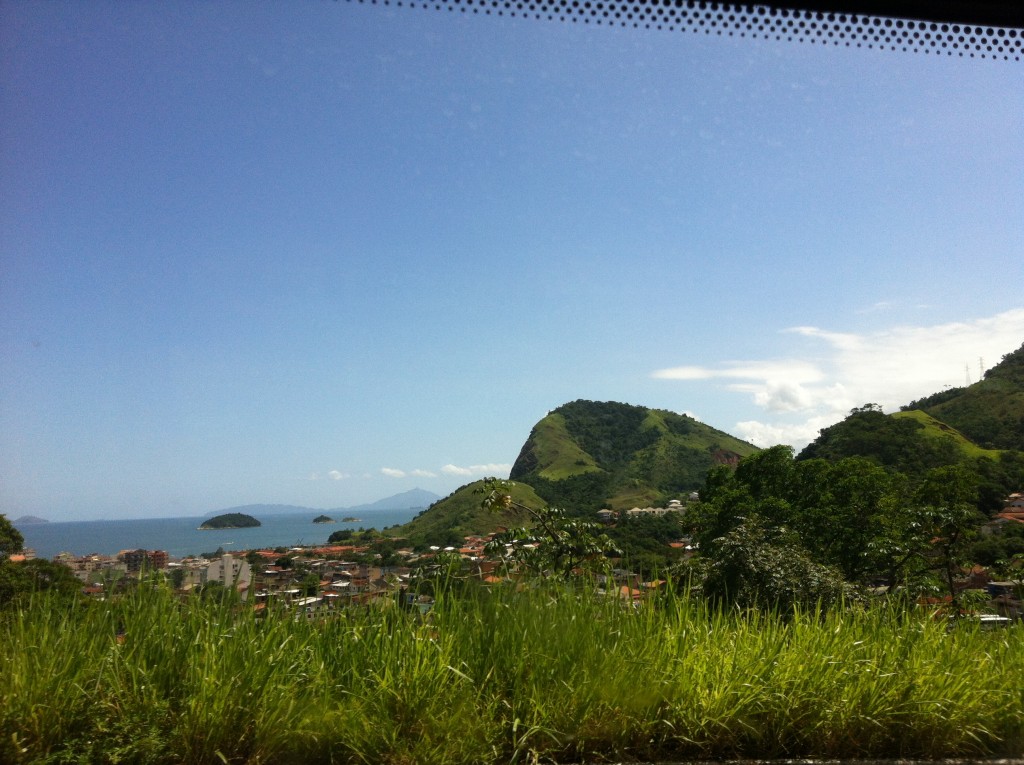 Paraty, not to be mistaken with the word ‘party’!, is a tourist hotspot but not too overrun. We were there during Brazil’s summertime and it was fine. There were lots of guest houses to chose from and you could see from the old bus station why they were building a new and bigger one right beside it. It was fairly chaotic when we got off the bus. We normally would just buy our ticket out of a place the day before, but this time we went up to see times and what was available. Everything was sold out for a few days, so our two nights in Paraty turned into three – which was ok but meant only one proper day in São Paulo.

Bus tickets bought and it was time for some grub before finding our hostel. We were a bit hungover from the caipirinhas the night before and luckily found an amazing middle eastern place called ‘Istanbul’ right beside the bus station. Great food, all made fresh! We had got chatting briefly to an English couple when we were at the bus station and they found the same restaurant, we ended up having a good chat about our travels. It was funny as they were just at the start of their South American adventure – beginning in Rio and working their way south, then up to Peru and further north. The opposite direction to the route we had just taken. We had only another week in South America so we were starting to get that leaving feeling. Can we do it all over again! Two falafel wraps and fruit juices and we were ready to carry the bags a few streets to our hostel/B&B. A newish place with about ten rooms and a nice shared decking area to lounge around with their lovely cats and dogs sitting by your feet. 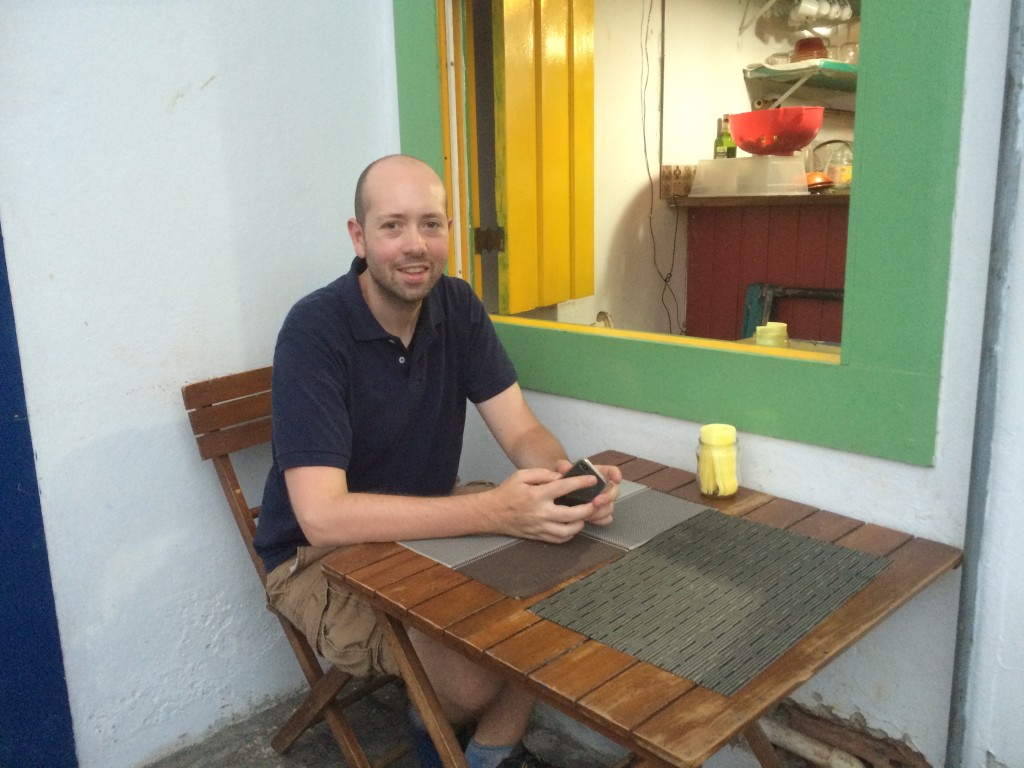 We explored around the cobbled-stoned streets and well preserved old town of Paraty. They’ve done a good job at retaining its colonial feel with whitewashed houses and vibrant Caribbean coloured doors and windows. There’s loads of restaurants and souvenir shops but we headed straight to the town’s beach which was where most of the town was too. We took a dip around sunset and you could feel the cold water coming in and mixing with the heat from the warm rocks which had been heated during the day. Oh yeh, one thing to mention about Paraty is that it was originally a slave trading point and still has some hallmarks today. There are quite a few churches around the town – each was built especially to ‘catered for’ different parts of the community. Outside one of them there was a local man dressed up in ‘slave clothes’ and chains collecting money from passing tourists for photos. This was a bit much for us and we moved on quickly enough. 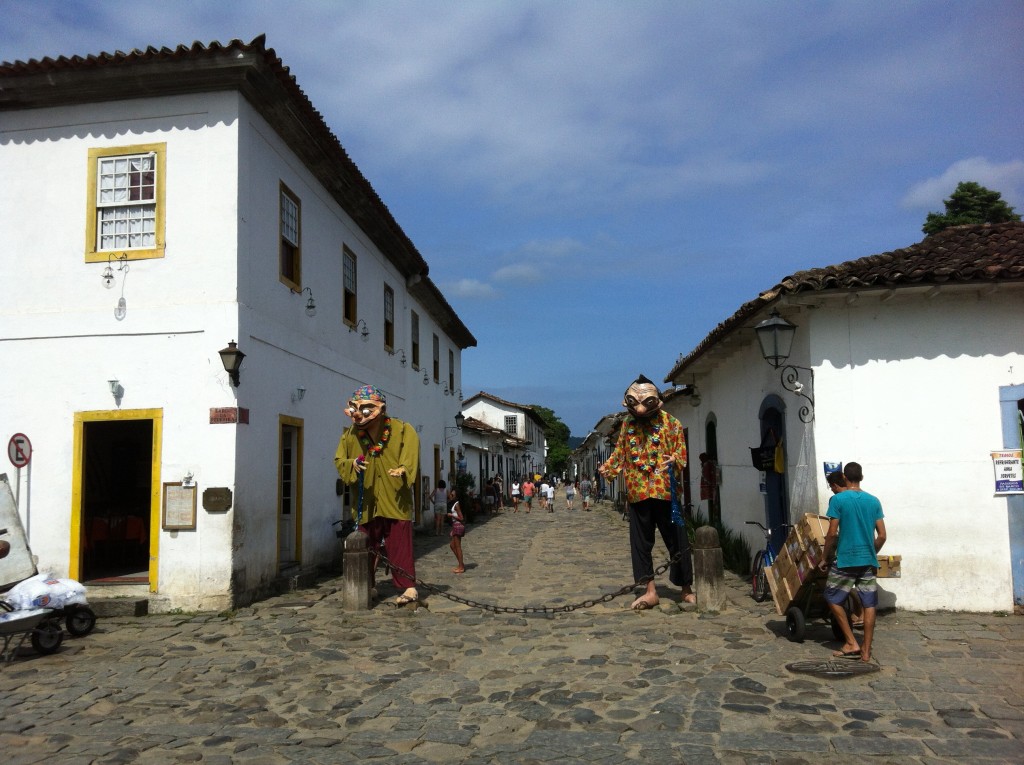 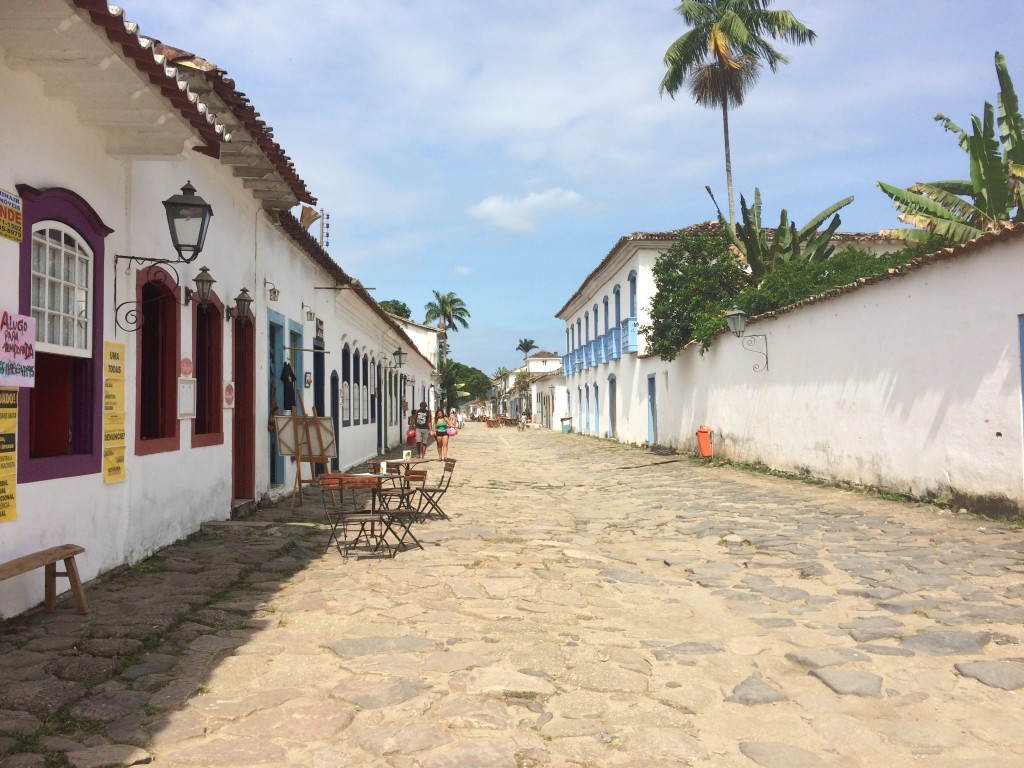 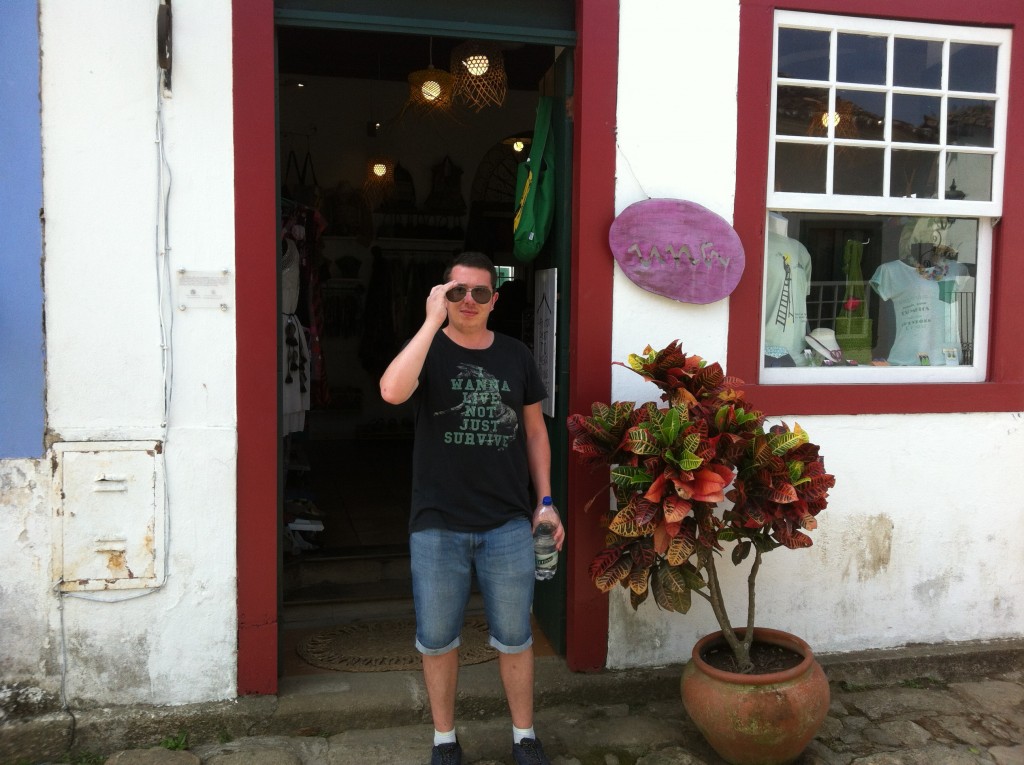 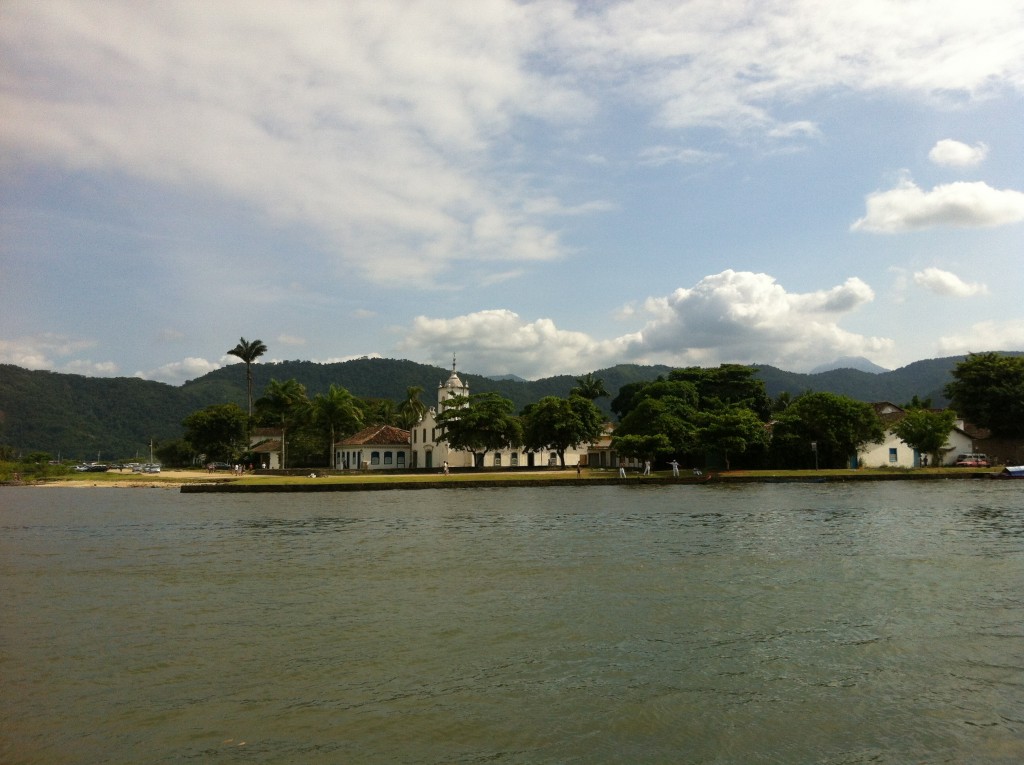 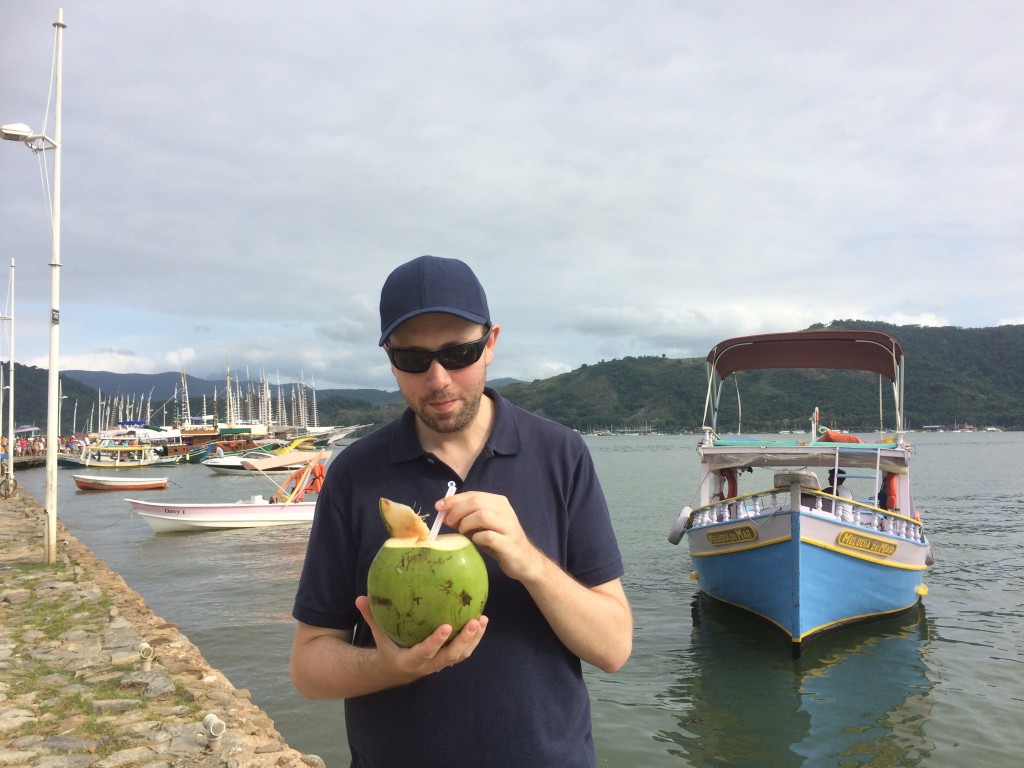 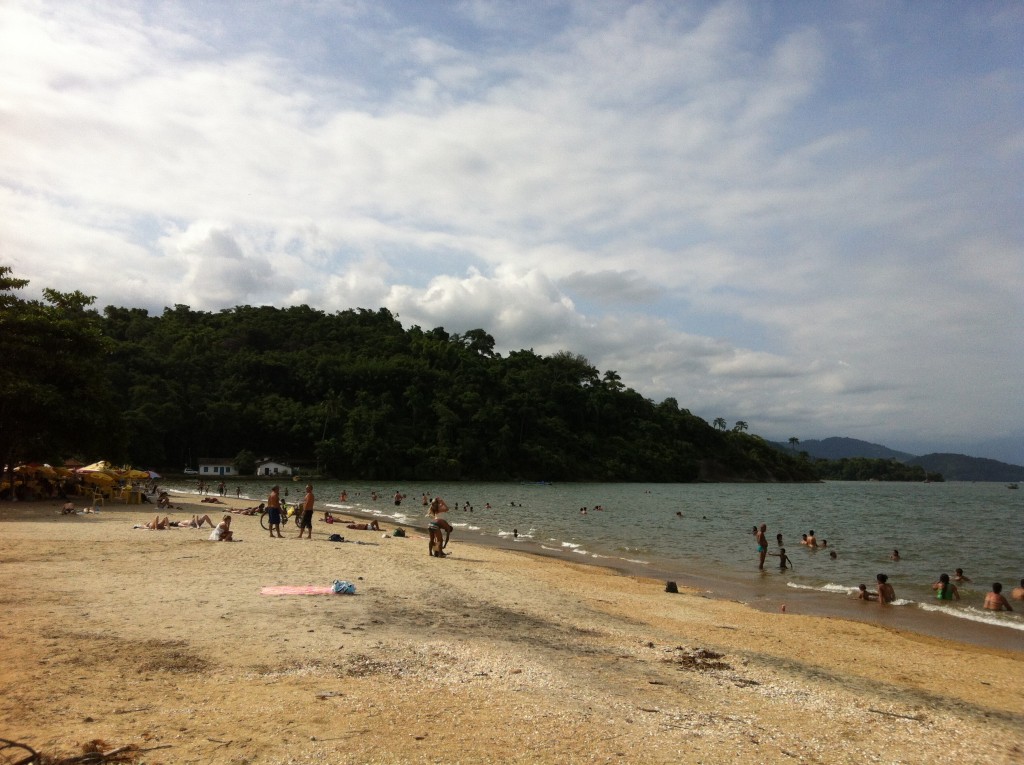 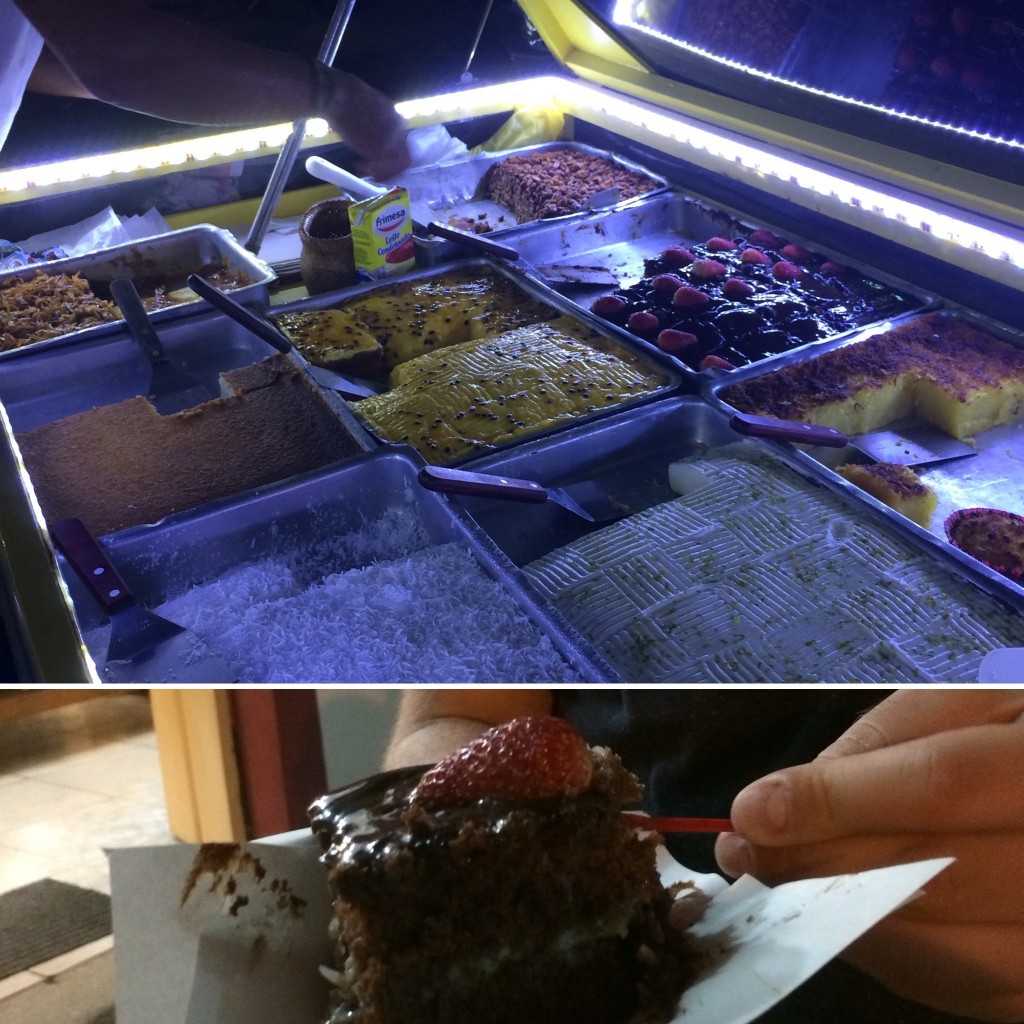 The next day was another beach day! This time we took a local bus about 45 minutes along the coast to Paraty Mirim which is another stunning beach with a backdrop of green tropical hills all around a deep water cove with other islands as you look out to sea. The sun was beating down so we did what the locals did and rented a parasol from the local bar and chilled on the sand for the day. The water was really warm as it was heated in the cove. A lot of the other places we’d been to along the Atlantic had been pretty chilly because of the cold water currents. It was a Sunday afternoon so lots of families were making a day of it – beer in hand. The bus only goes a few times a day and we got one of the last ones back to Paraty before nightfall. 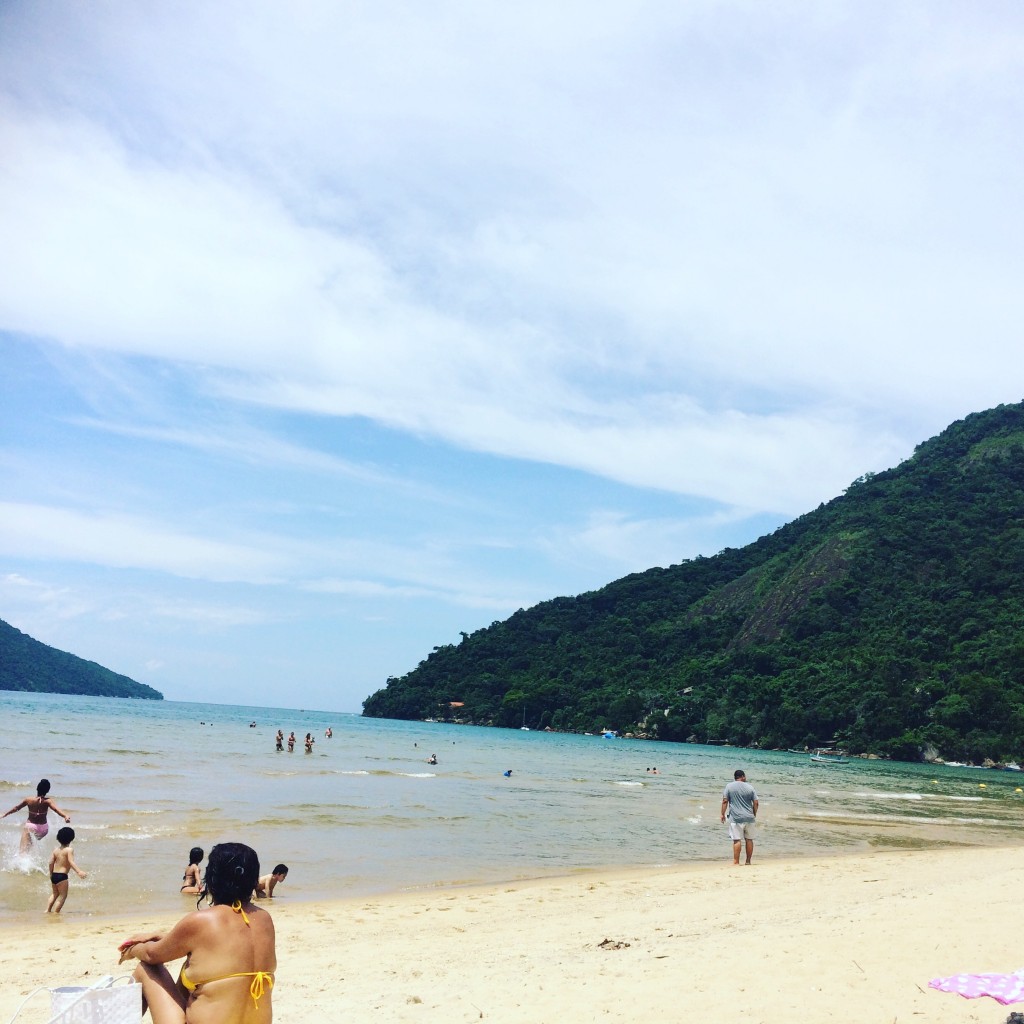 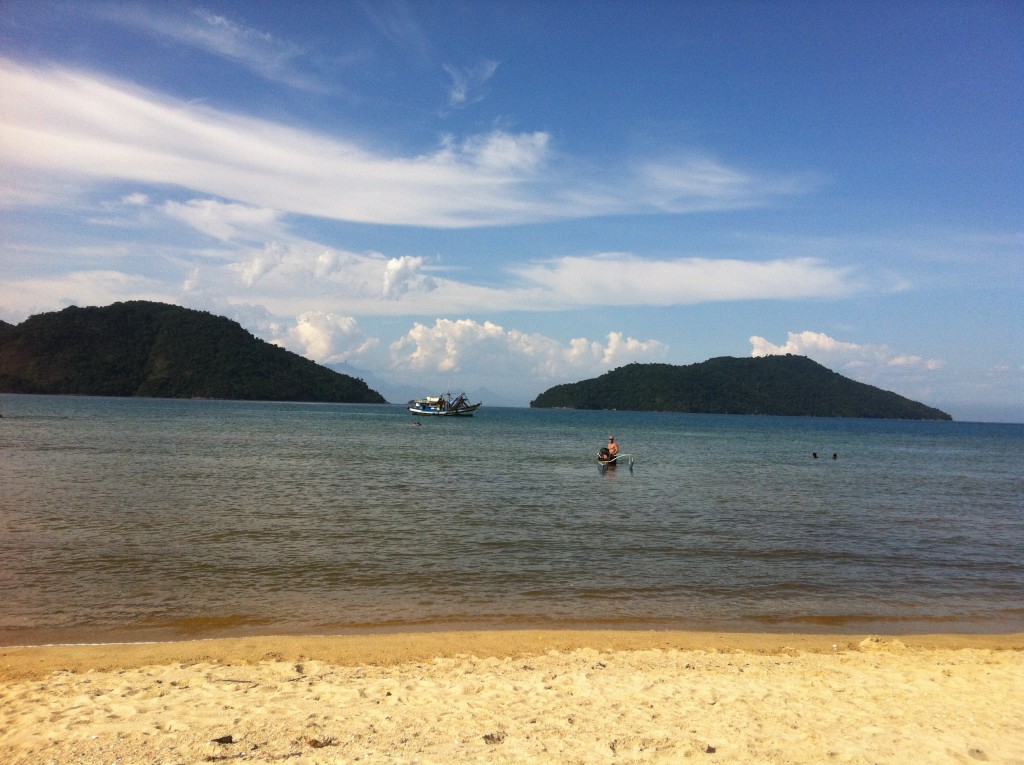 We probably should have done more research and planning as there’s a lot of great day trips to do around Paraty. You can rent or join a group on a boat trip around the islands or there’s a good few hikes around the area. I guess we were catching up on beach-time!

São Paulo was our next and final stop in Brazil. After a five hour trip it was evening time and we arrived into a rainy bus terminal. It was huge – buses going everywhere! We hopped on the metro and walked about fifteen minutes to our hotel which we had booked on booking.com. We used the app a lot when searching out accommodation and it’s been really handy. But this one time we got caught out. We had booked our São Paulo accommodation a week in advance before we knew we wouldn’t be able to get a bus out of Paraty on the day we wanted. booking.com have a policy where you can only amend a booking up to two days in advance and we missed this. We had called the hotel and they said it was fine and said our booking was amended for arrival one day later. Although when we arrived, they had cancelled our booking and had no rooms available. The woman behind the counter was pretty unhelpful except for allowing us use their wifi. We booked somewhere else and headed across town and checked-in. (After a few emails from booking.com we got our money back as the original hotel hadn’t followed the correct procedure!)

We were staying downtown just off Parça da República. The area had seen better days and was quite shifty at night when we went out to get some food. We were safe though as they have bouncers outside every restaurant! John read that this is common as a series of robberies took place where everyone in the restaurant was robbed in one go!

We had one day to see São Paulo so we made the most of it and walked our feet off. São Paulo is such a big metropolis with differing medium-rise buildings and skyscrapers. When you managed to look upwards along the busy streets, there are lots of designs and inscriptions dating back to the São Paulo of the past. One minute you’d walked by the beautiful National Theatre and the next there would be an ugly 1970s/80s building in front of you. 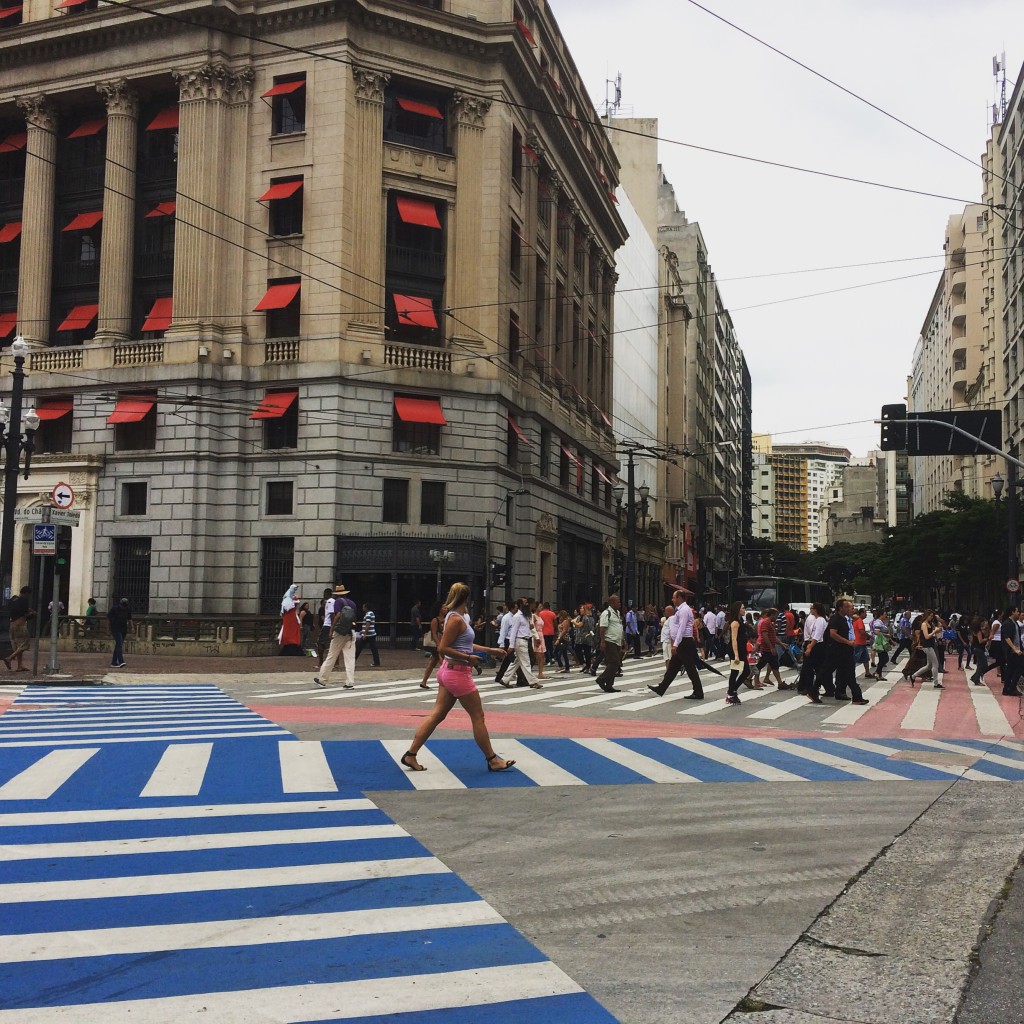 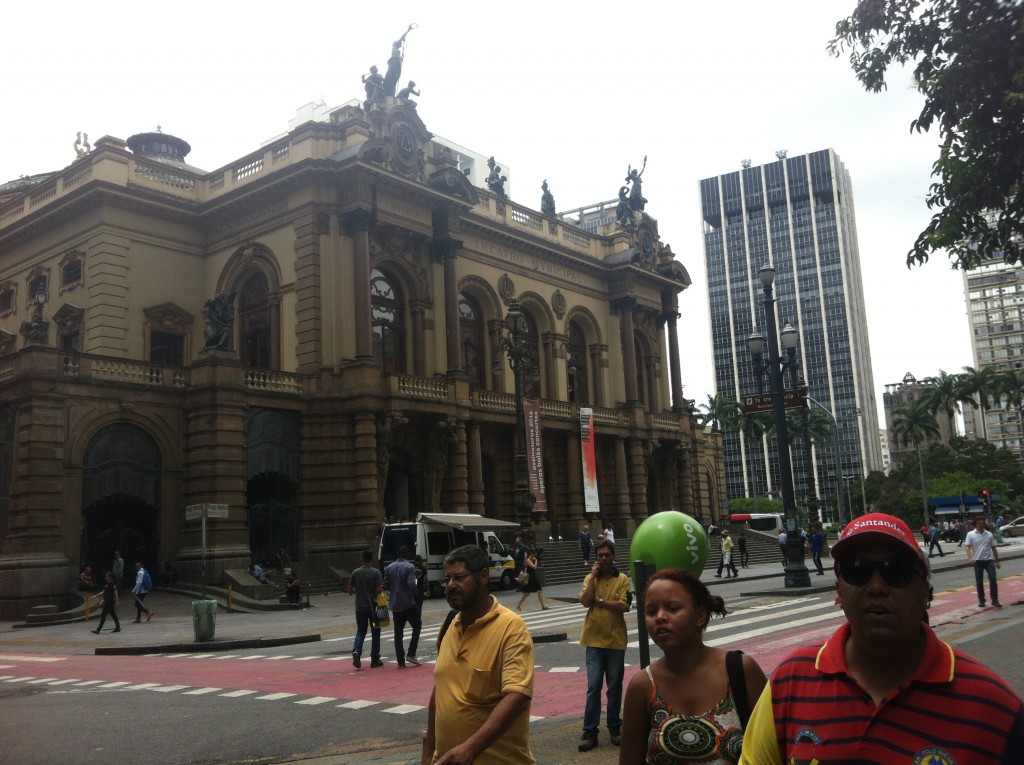 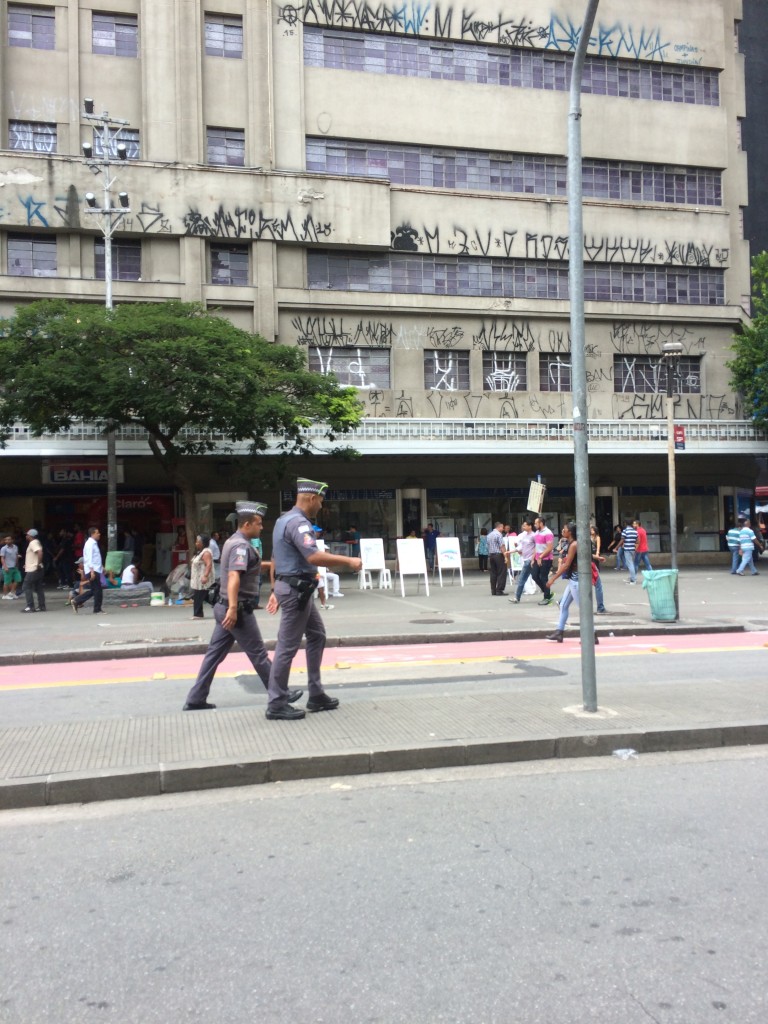 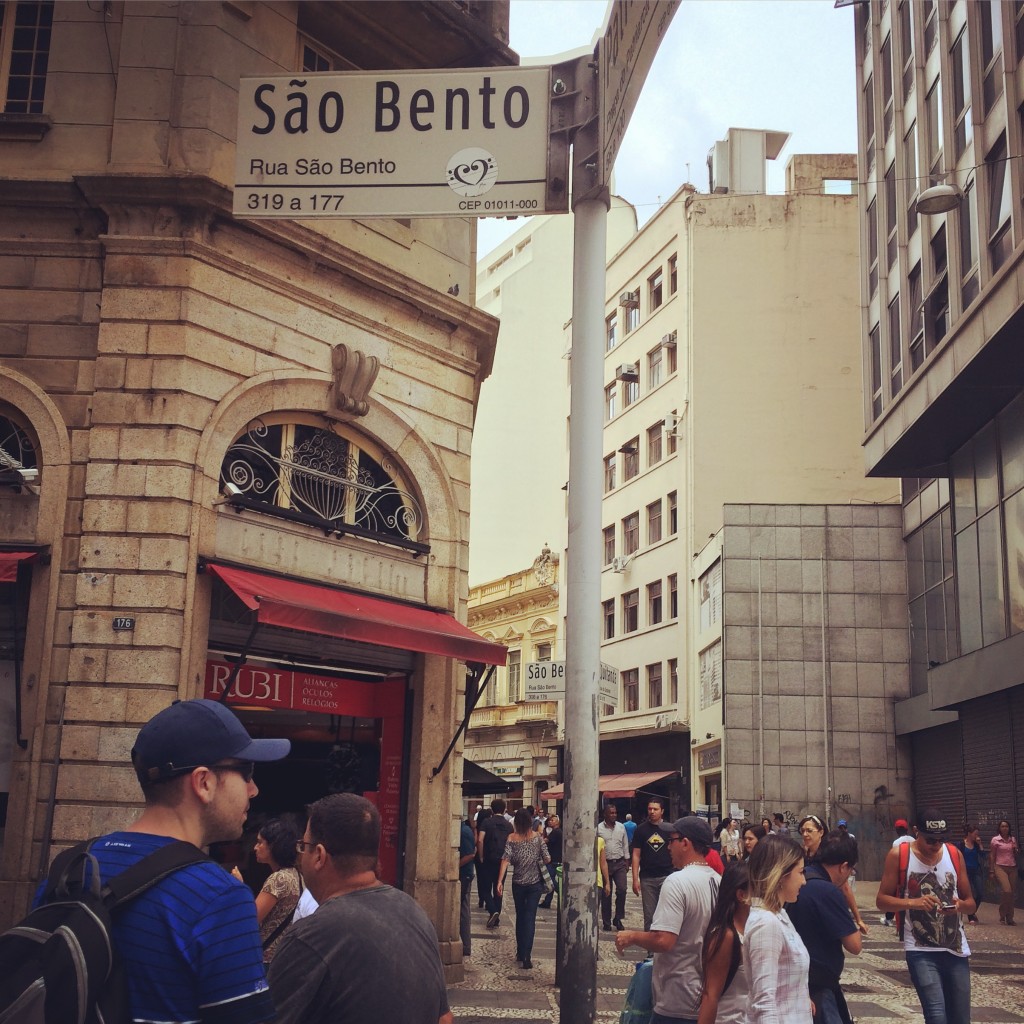 We had read you can visit the rooftop of one of the more famous downtown skyscrapers – the Martinelli Building. It’s well known as there is a villa built at the very top. There’s a free tour every hour or two and we headed up with the others waiting. The views from that height are always stunning and you could really get an idea of how big the city way. Skyscrapers as far as the eye could see. We took lots of selfies and photos for other people and then back down we went. 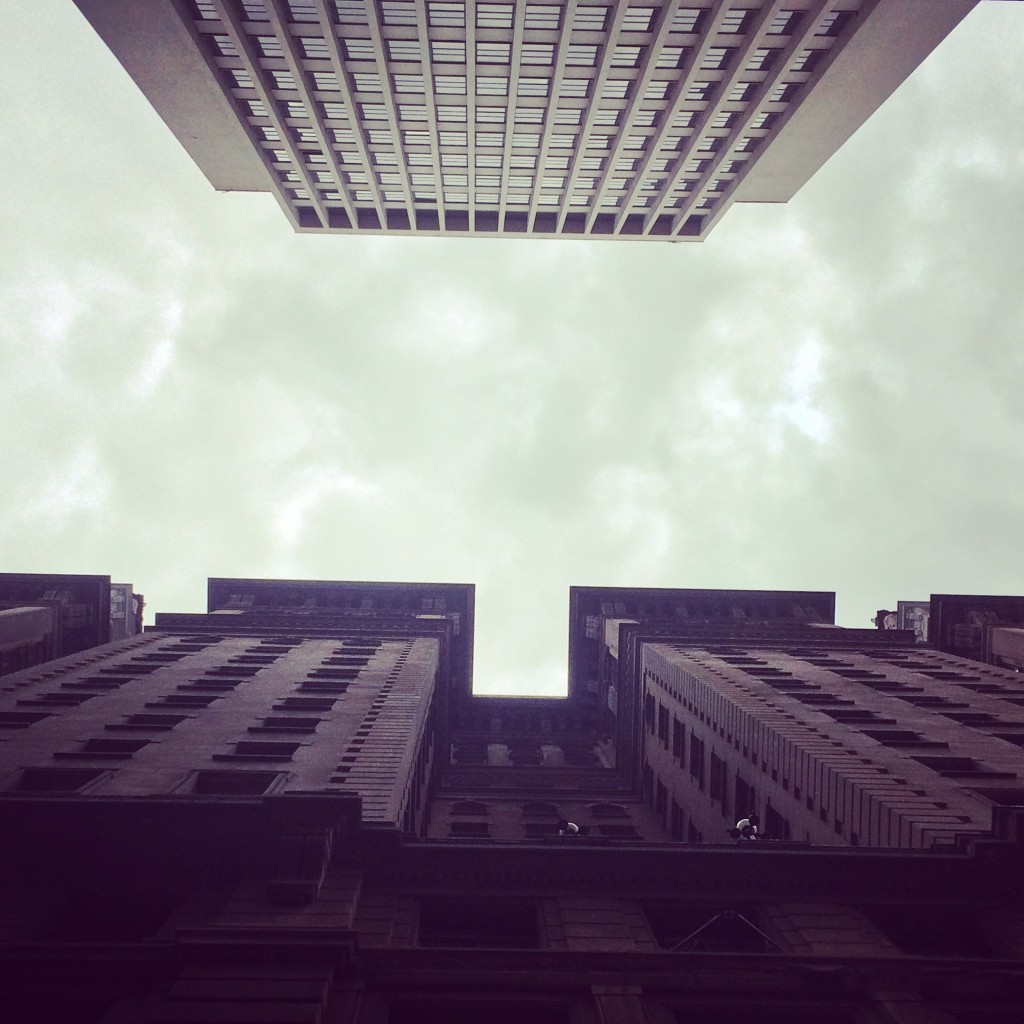 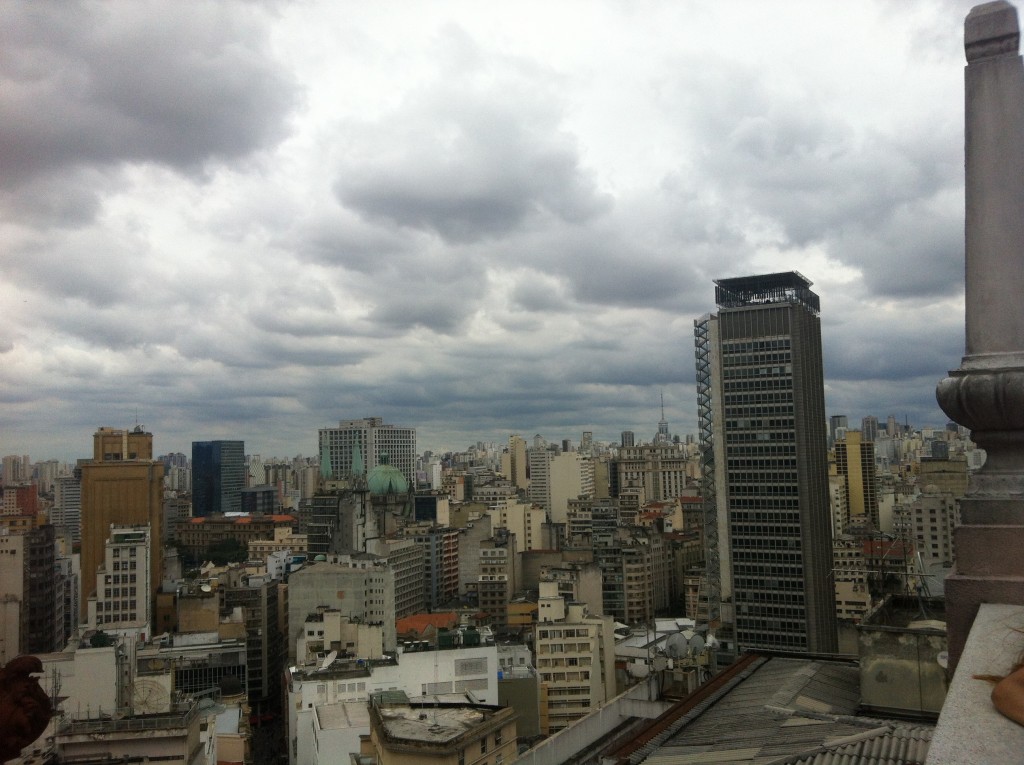 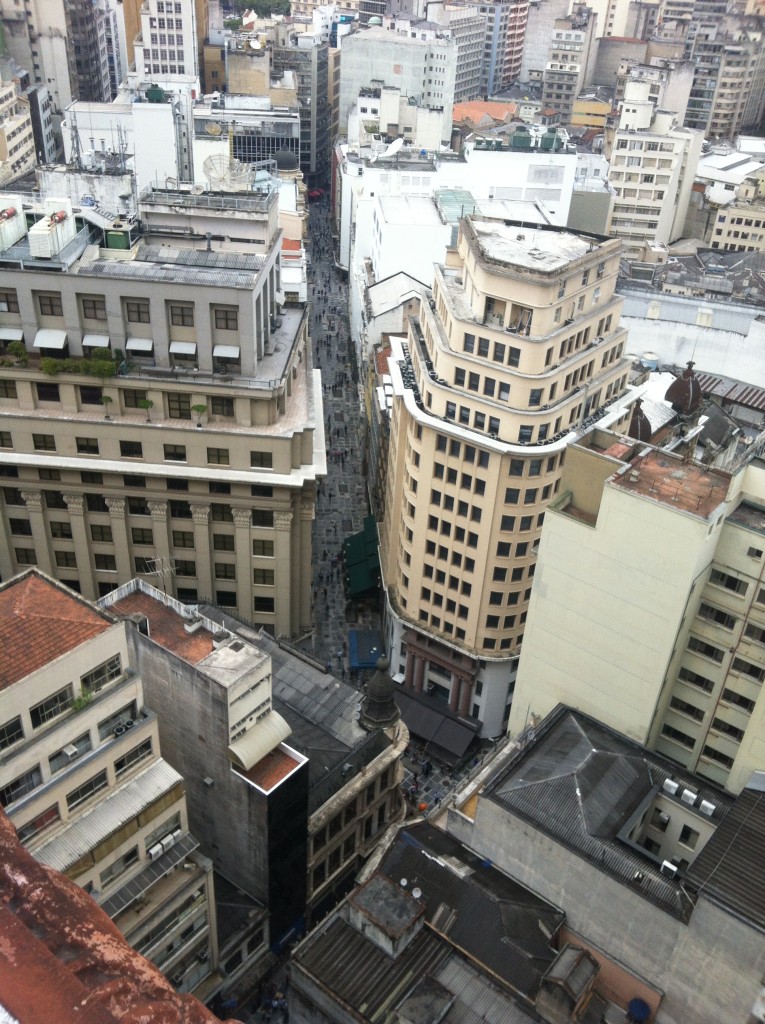 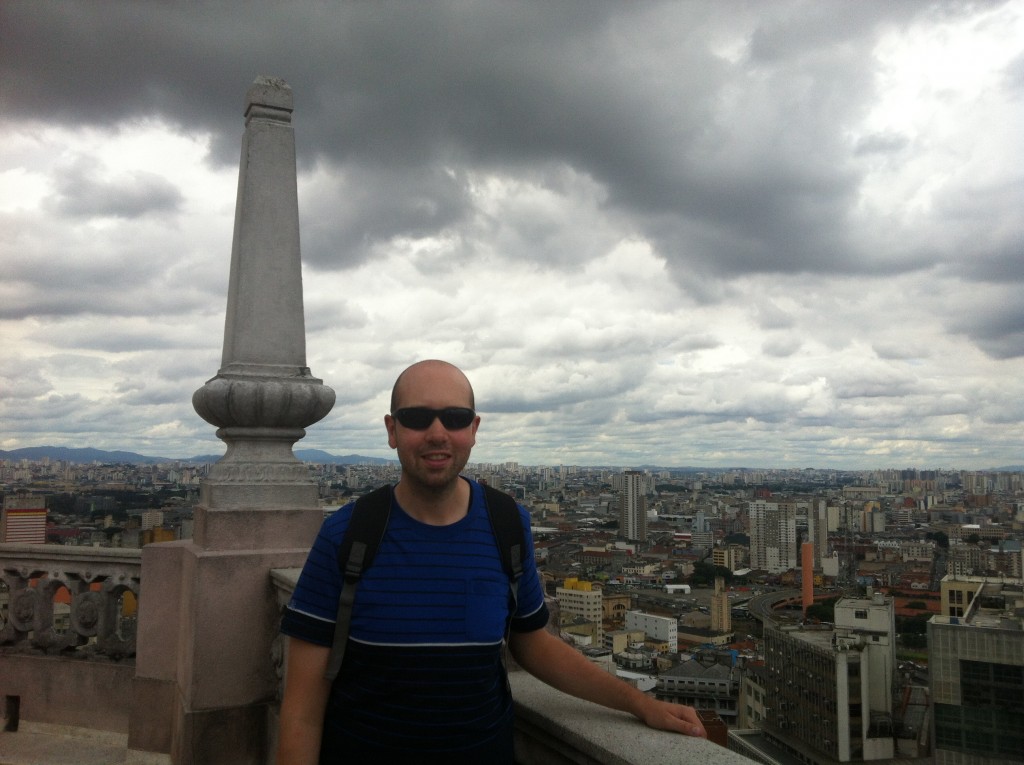 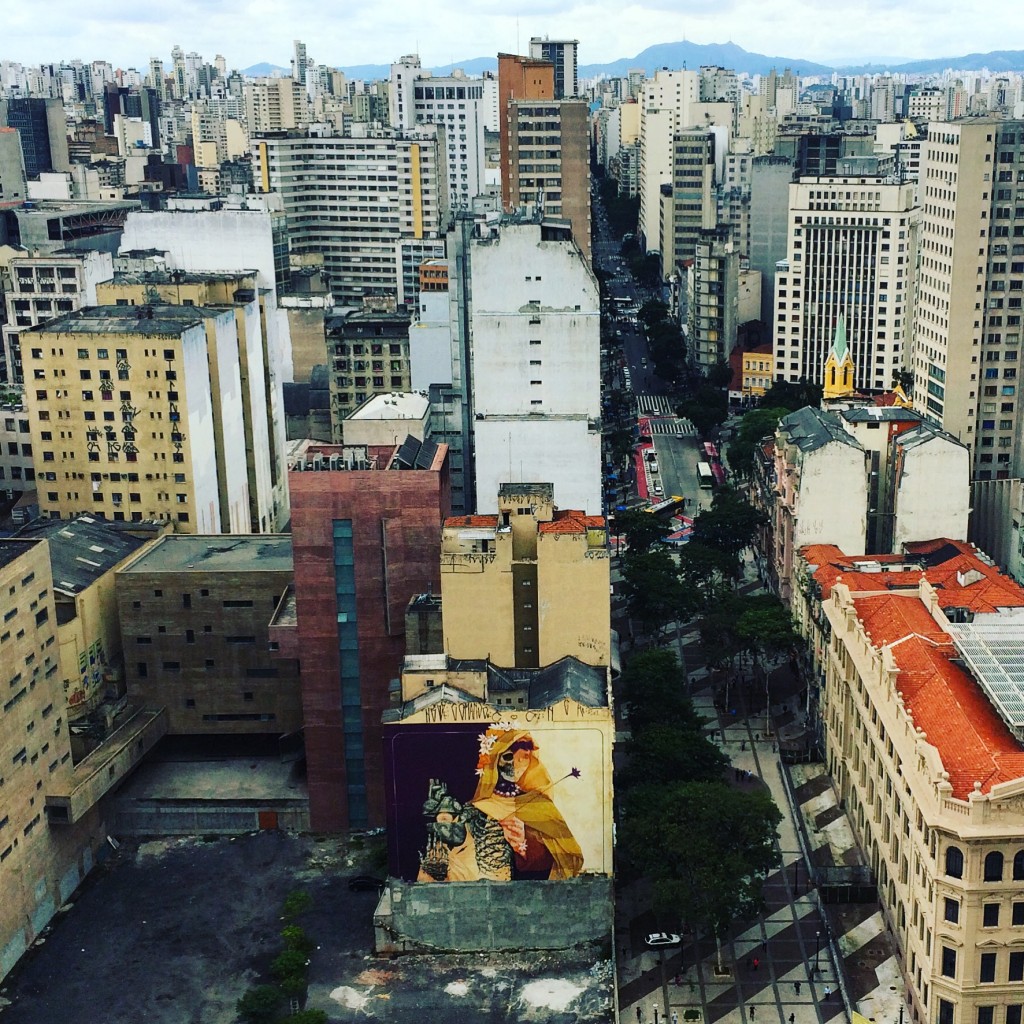 Next stop was the central market which was similar to other renovated markets we’d visited in South America. Lovely cast iron glass structures that had found a new lease of life. They had the regular fruit and veg sellers with the butchers just across the way. We got lunch in one of the traditional sandwich bars who serve their speciality of ginormous sandwiches packed with different meats. We barely finished them and we were stuffed on our way out. 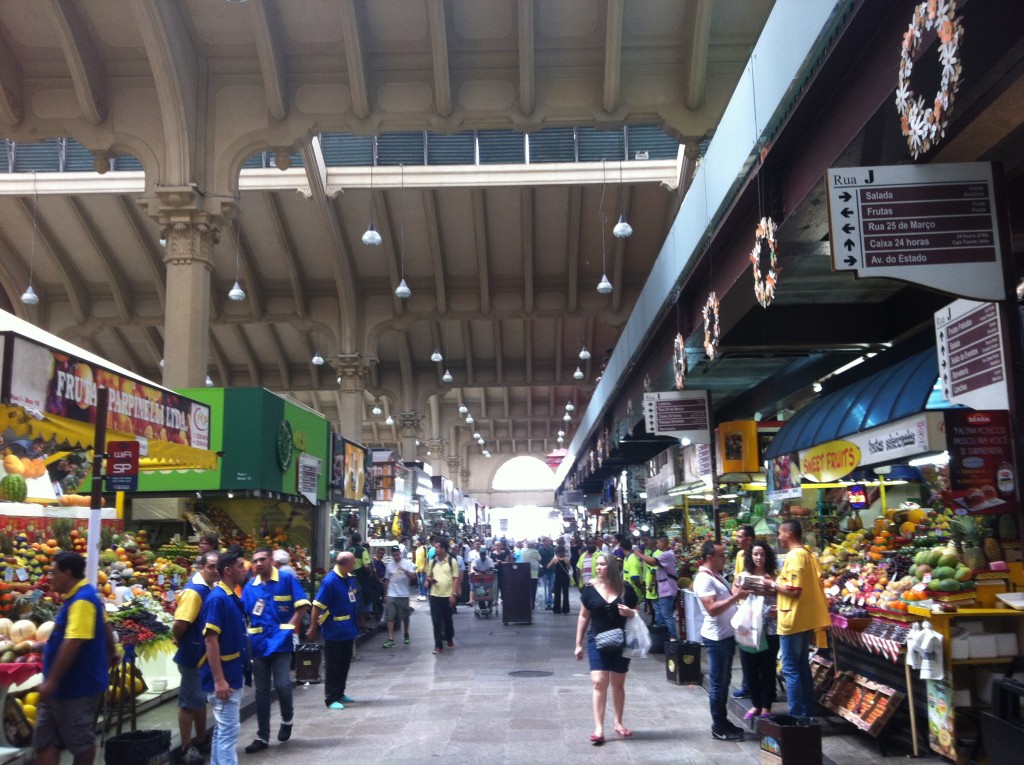 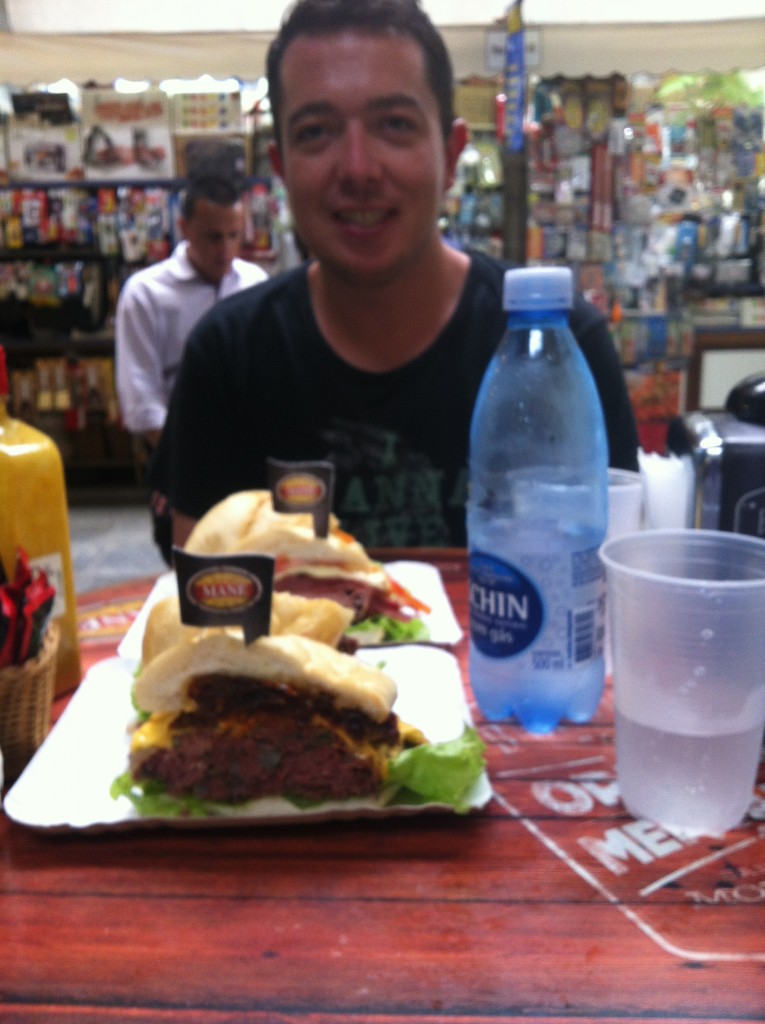 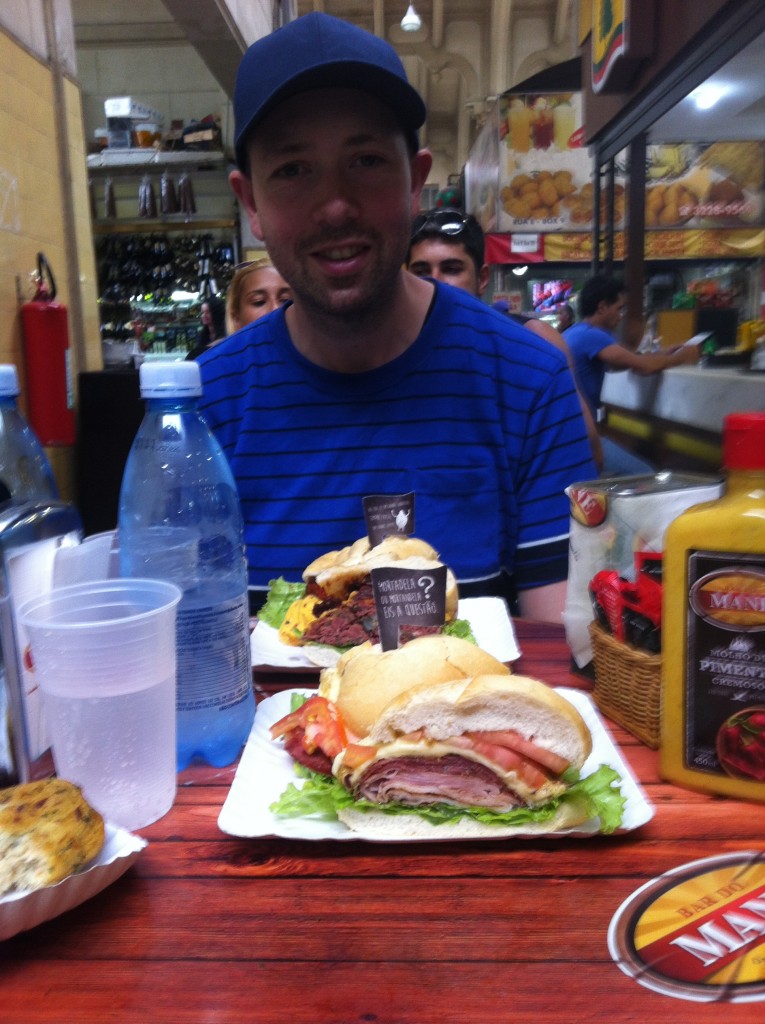 We struggled to get to the cathedral and walked around some more. We kept coming across ornate buildings. So much to explore and unfortunately we only had a one day stop. We’ll need to go back! 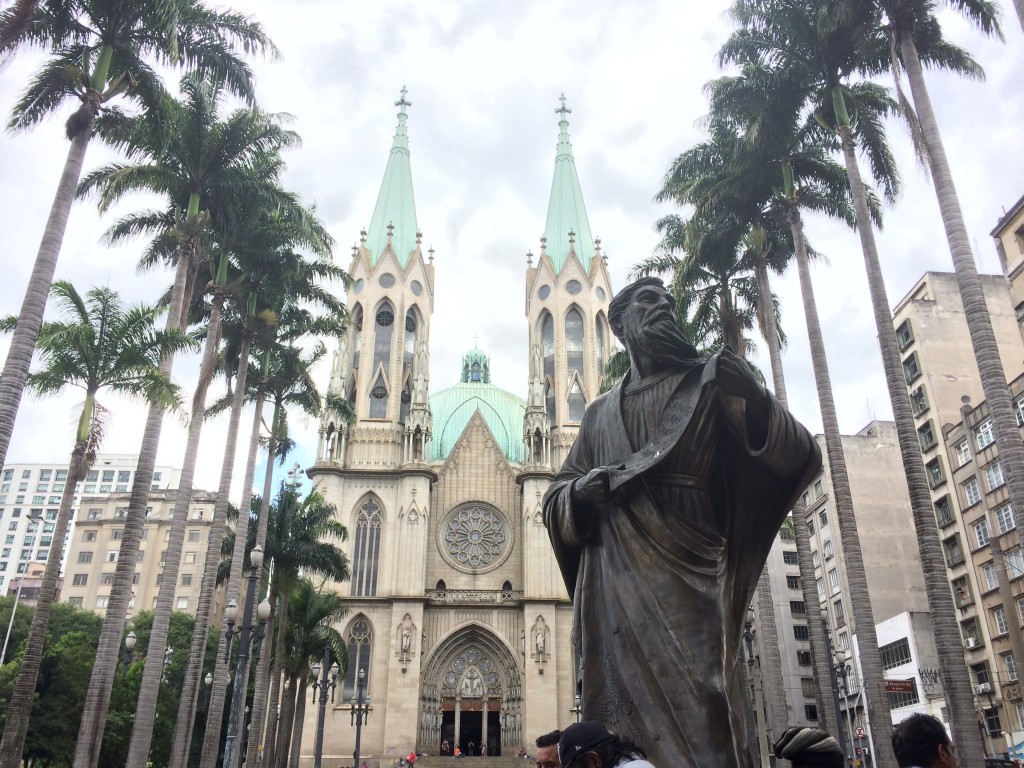 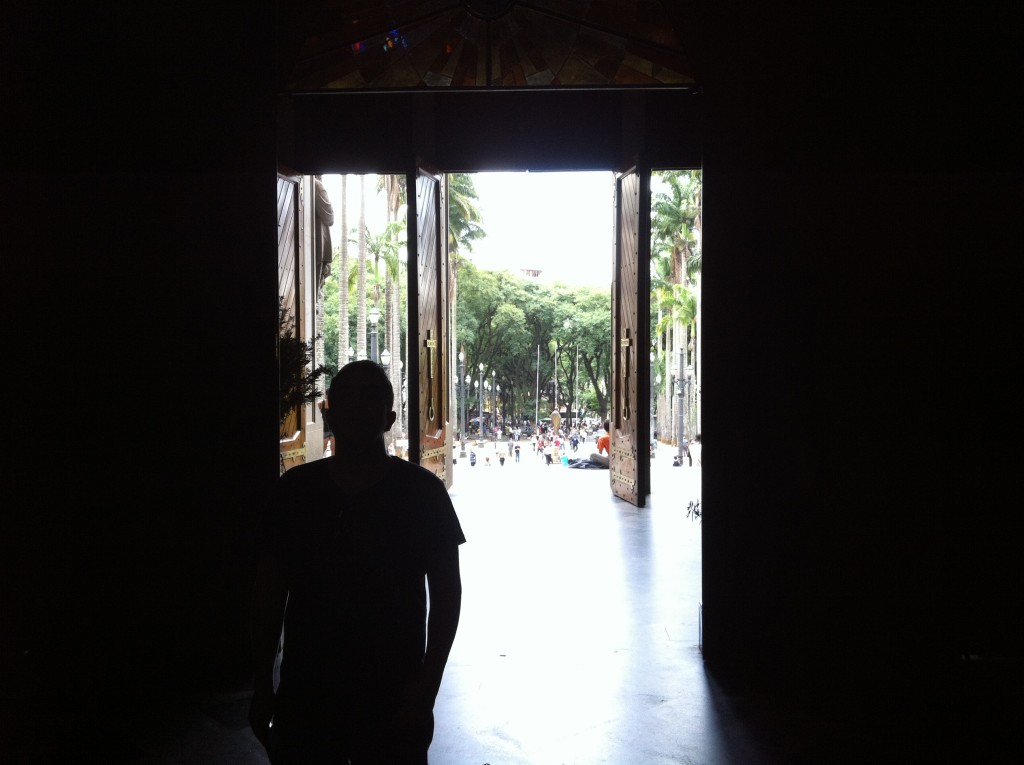 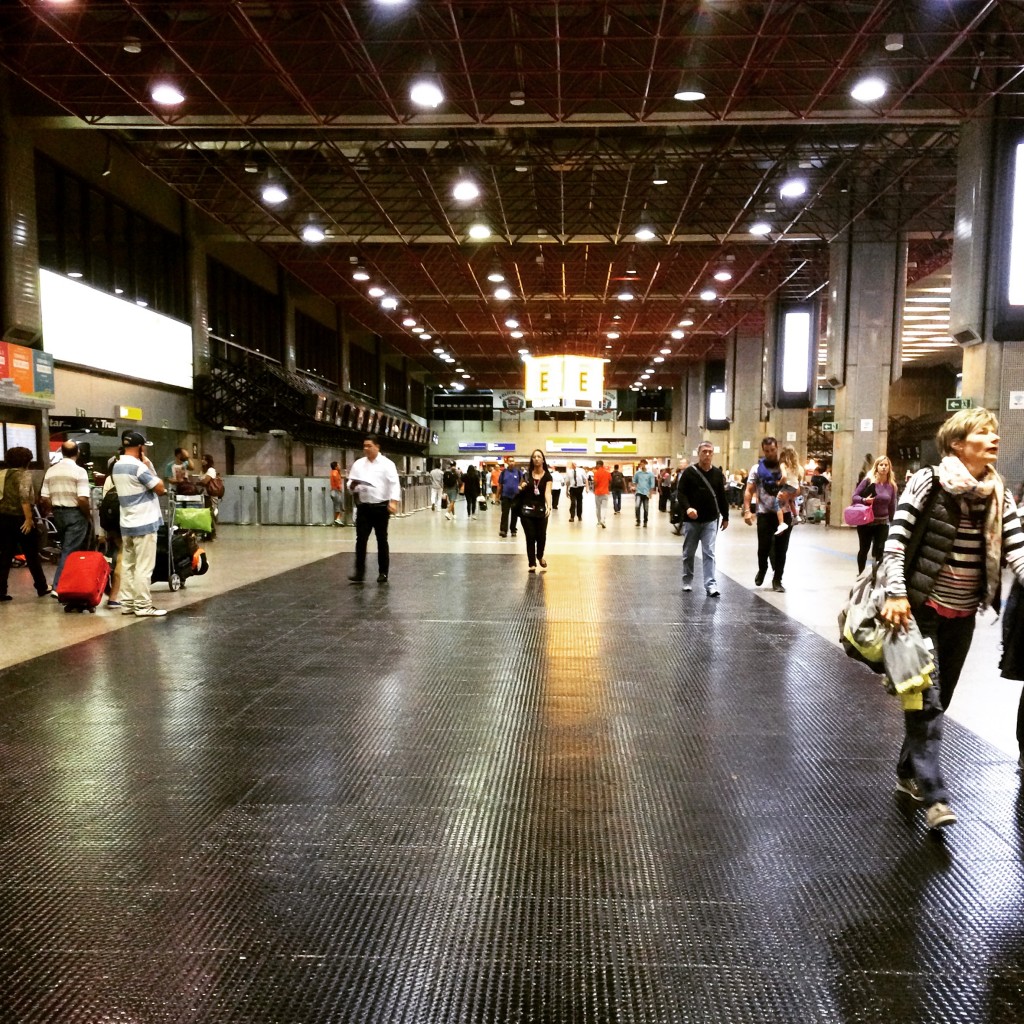 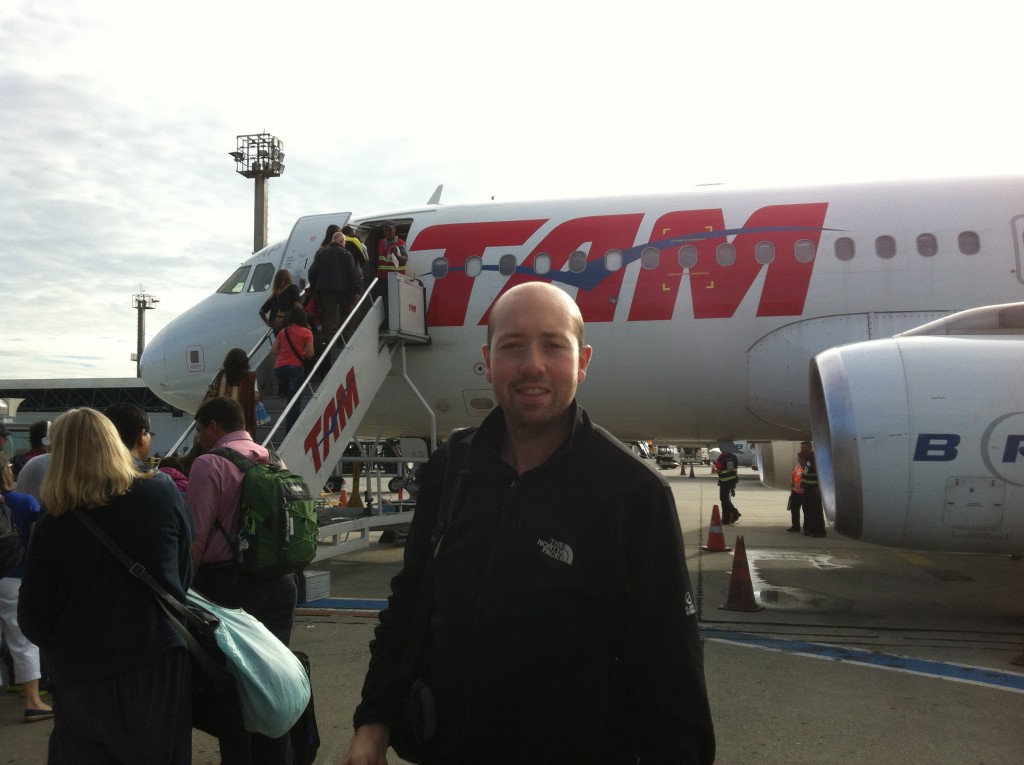