Despite being bang in the centre of the continent, Paraguay is one of the least visited countries in South America. It’s not the easiest place to get to by land and airfairs have a heavy levy for flights coming from outside the country. But since we were close to the border when we were at the Iguazú Falls and I also got a recommendation from my old boss who had been there and liked it, we decided to use a few extra days that we hadn’t planned out and headed into the country and to the capital, Asunción.

To get to Paraguay, we had to go through Brazil and their border town of Foz do Iguaçu. Luckily we got a bus that went from Argentina, through Foz and on to Paraguay’s border town, Ciudad del Este, without us having to change buses. Even though they are all within a 20 mile radius of each other, the towns all uses their own country’s currency and the language used changes from Spanish to Portuguese to Spanish again although locals usually accept the 3 currencies and have some Spanish, English and Portuguese. 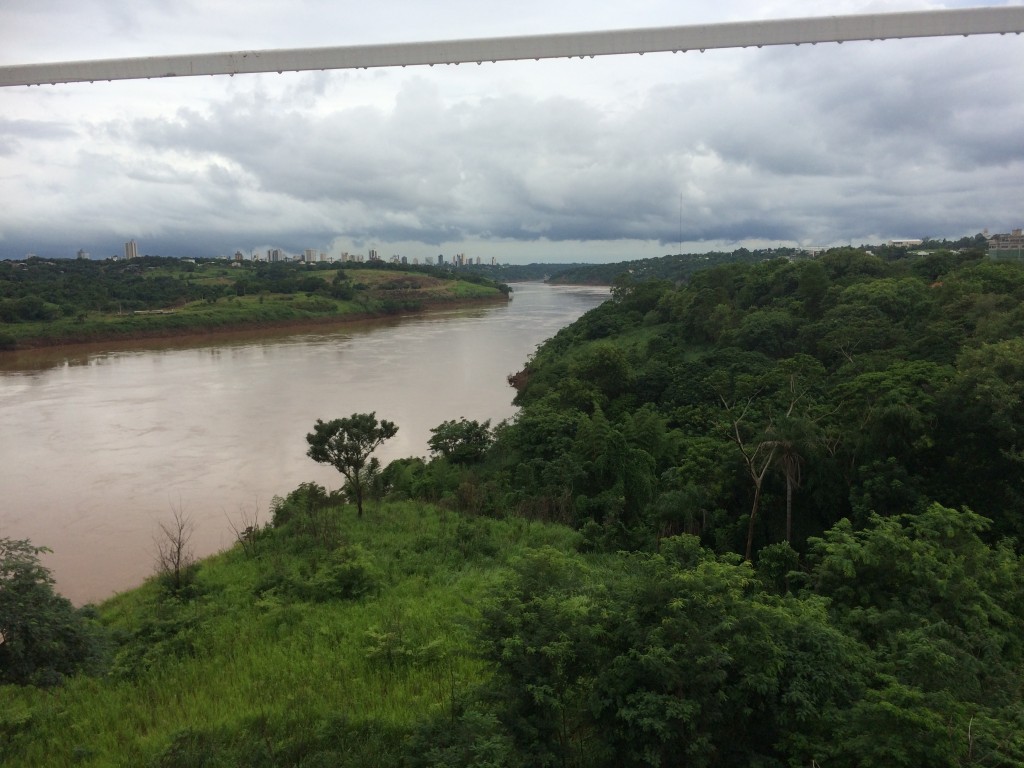 We seemed to be the only tourists on the bus and after we crossed the Friendship Bridge that links Brazil and Paraguay, we had to ask the driver to stop and let us out so we could get an entry stamp in our passports. We thought that the bus might wait but when we came out of the immigration office it was well gone!

Ciudad del Este is a real Wild West town and as we walked up the main road looking for the bus station we were hassled by salesmen to come into various shops. With our backpacks full to capacity, we were not buying anything today. Lots of shoppers from Brazil and Argentina come over to Paraguay for cheap cigarettes, electronic goods and booze. It’s a dirty, messy town but the hustle and bustle of border towns like Ciudad del Este always have a lawless charm about them. 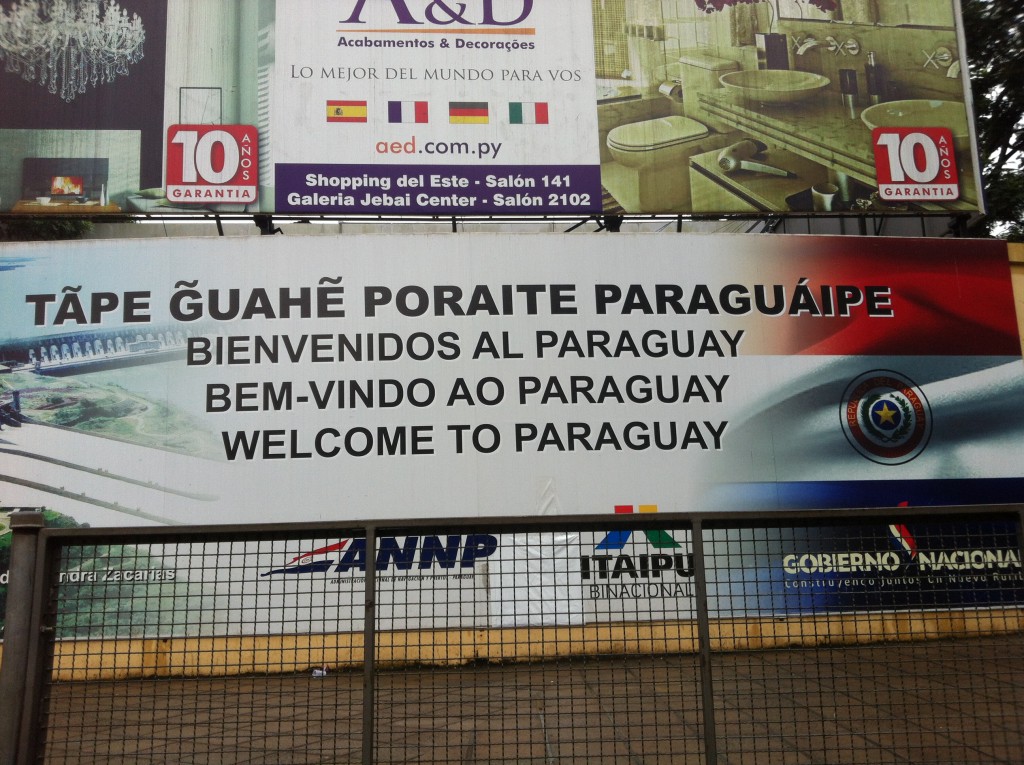 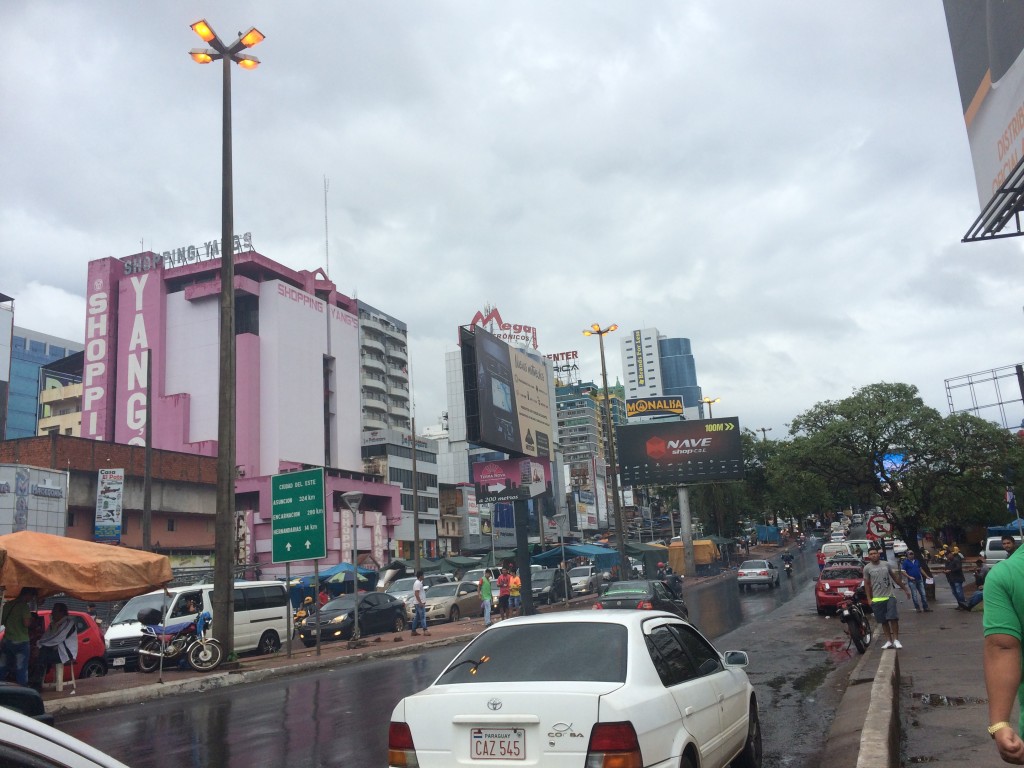 After walking for about an hour we finally got to the bus station and luckily got on a bus that was just about to leave for Asunción. The bus was a comfortable double decker, similar to what we were used in Peru but again we were the only foreigners on the bus and definitely feeling that we were on an untrodden South American path. Despite the language differences the locals on the bus seemed really nice and smiled and gave the odd nod of the head to us, we were definitely a curiosity to them.

The journey lasted about 7 hours, we had expected 5 but we got to Asunción about 6pm and managed to get a local bus into the centre (and listen to a local musician on the way). 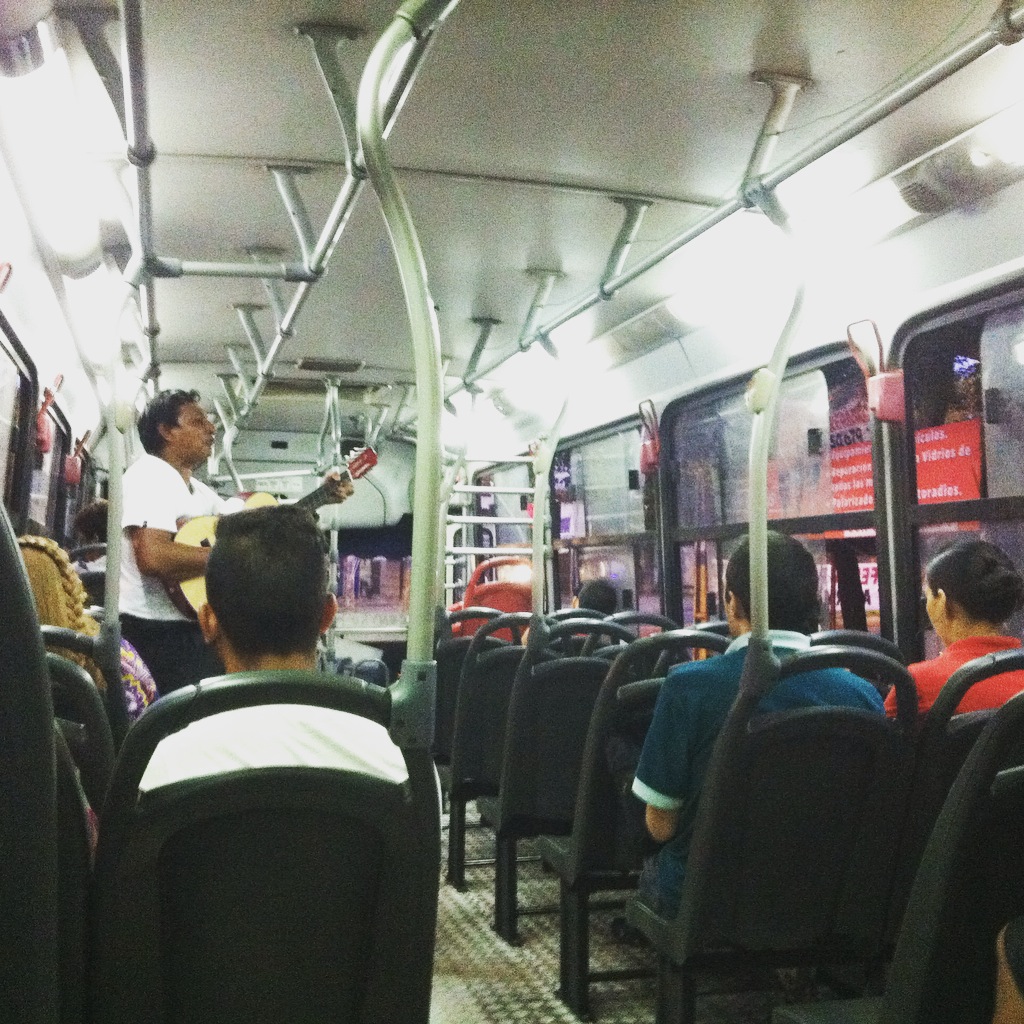 Like in the capital of Uruguay, the weekends are the quietest times of the week. Streets were lined with market stalls who were shutting up on Saturday evening and would stay closed until Monday morning. People disappear back to the suburbs at the weekend and the city centre was quite dead. We checked-in to the hostel, where the receptionist was very interested that we were Irish. In our experiences, all the smaller South American countries love a Republic and feel proud of their own independence, their separation from their larger neighbours and the Paraguayans are no different. There are links between Ireland and Paraguay with an O’Higgins being a founding general of the State and Eliza Lynch, an Irish woman, being the mistress of their most famous Leader/Dictator Francisco Solano López (more on that later). The hostel, El Viajero Asunción was ok but the room was recently renovated and actually stunk of varnish but it was a full house on the night we arrived so we had to stick it out. There were lots of people milling around the hostel watching TV and there was even a small swimming pool. The guests were a mix of South Americans and Europeans and both groups seemed to keep their distance from each other! 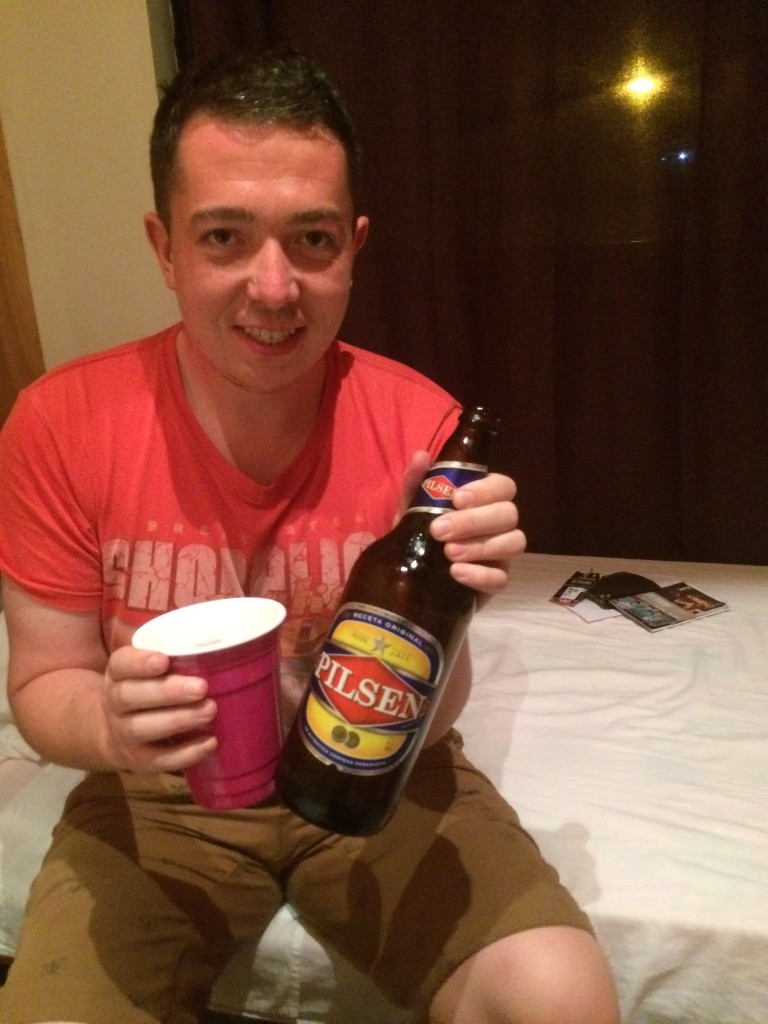 There was a small bar in the hostel so we hung around for a while then went out to see what was happening on a Saturday night.

The city centre is pretty compact and easy to manage with streets laid out in a grid system. We found a good restaurant called Bellini, recommended by the Lonely Planet, that served pasta dishes where you pick your own ingredients to add to the pasta and get it cooked fresh. It was a nice break from having the same SA staples of chicken and rice.

There were a few bars open around the main square, Plaza de Los Heroes, with lots of locals sitting outside on the summer night and even a few stalls set up on the street when you could get fresh cocktails and stand around listening to the dance music coming through the amp hooked up from the stall to the closest streetlight for electricity. It was very chilled and a nice and relaxing way to spend our first night. 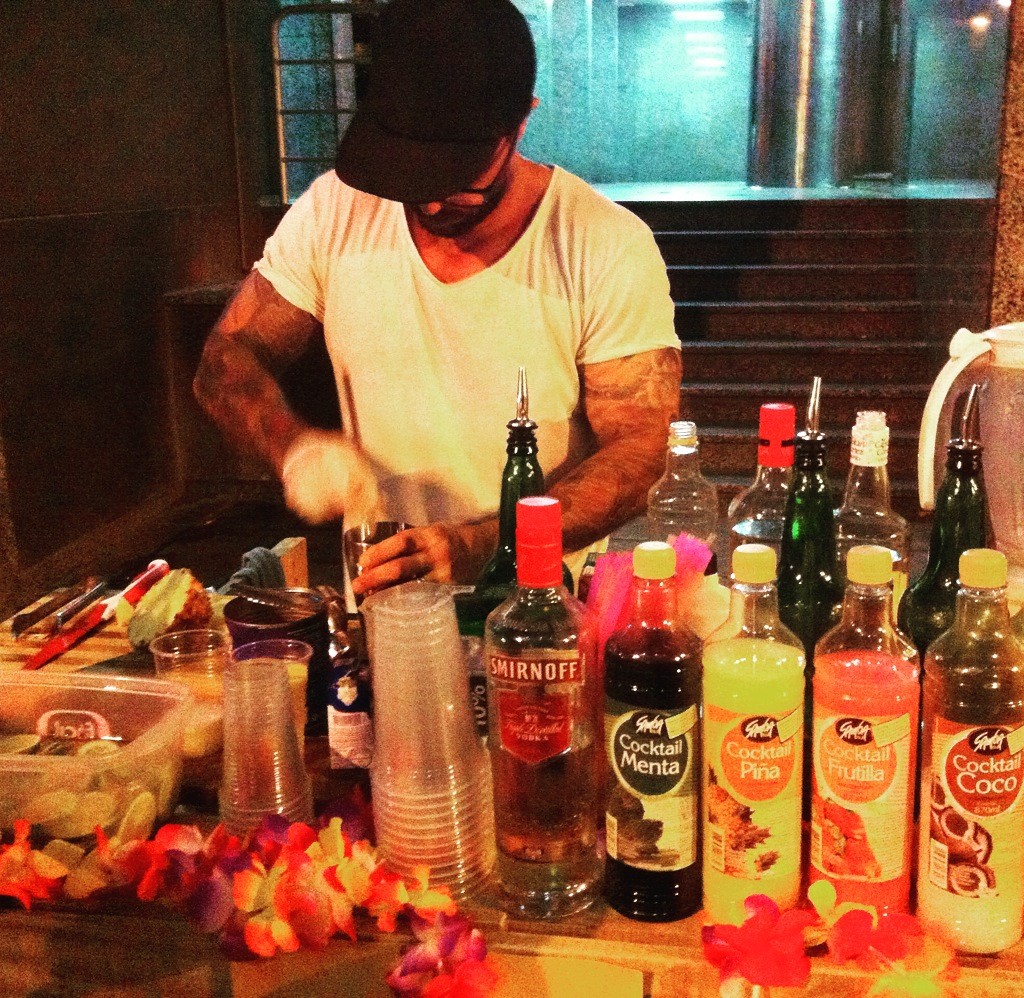 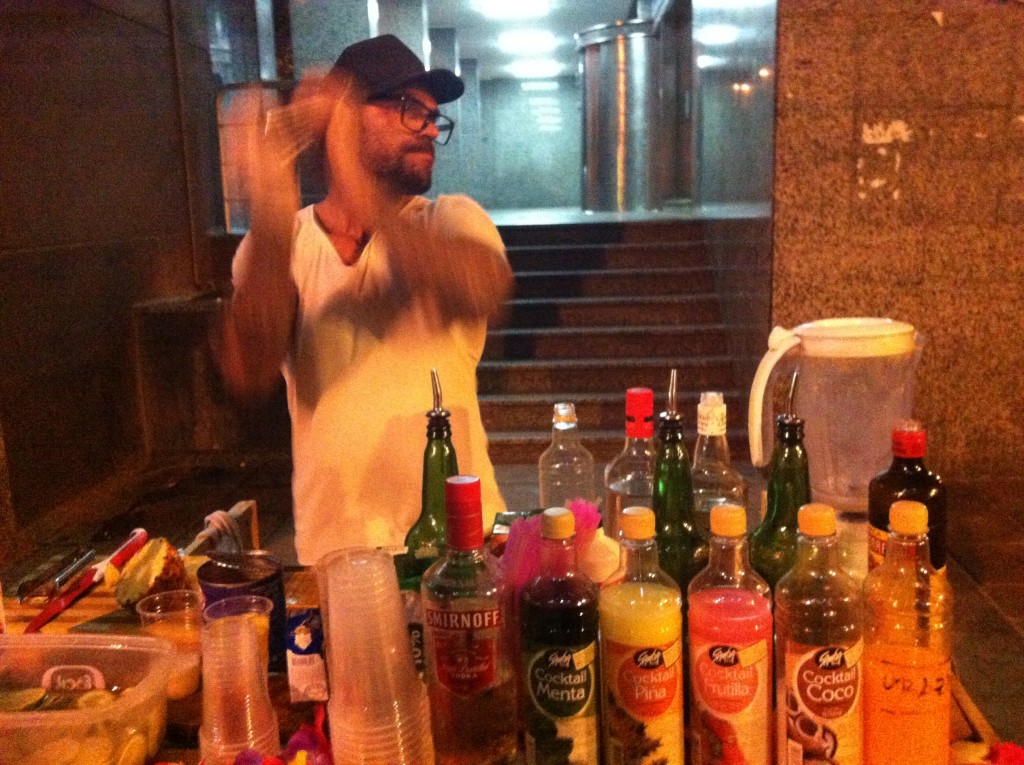 On Sunday we managed to change rooms to a less smelly one and set out to explore the city. As its a compact centre, we got around the Parliament building, President’s house, Cathedral, Port and Naval Museum pretty fast. It’s one reason there aren’t many tourist as there is no one ‘must see’ item. We went into a courtyard which the guidebook had said was a complex of a 18th century restored colonial houses and stables but it was nothing of the sort. There were just a few people standing around using the free wifi and looking at us like we took a wrong turn. 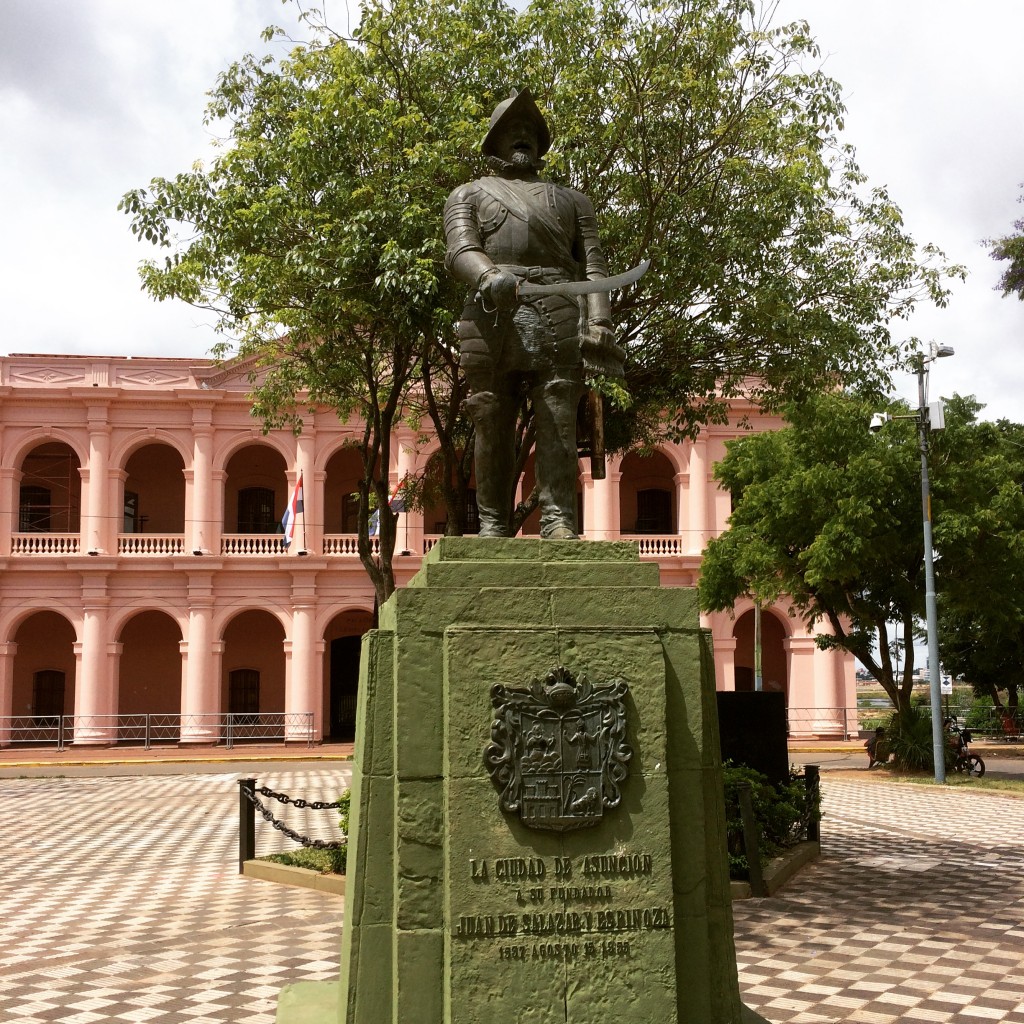 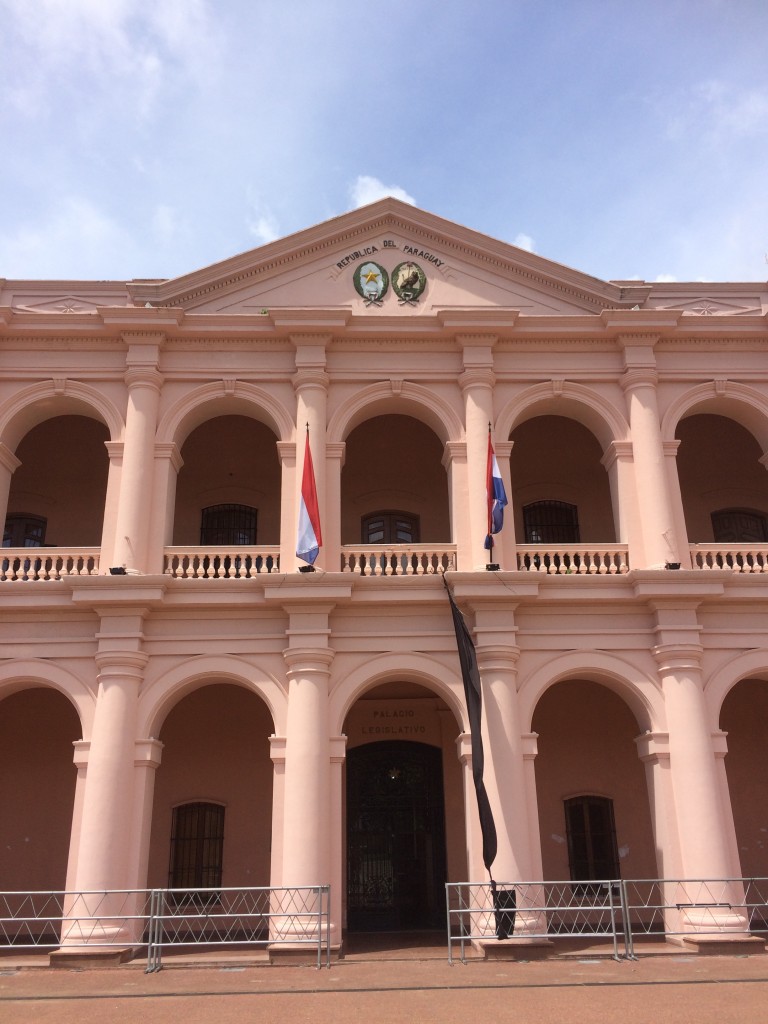 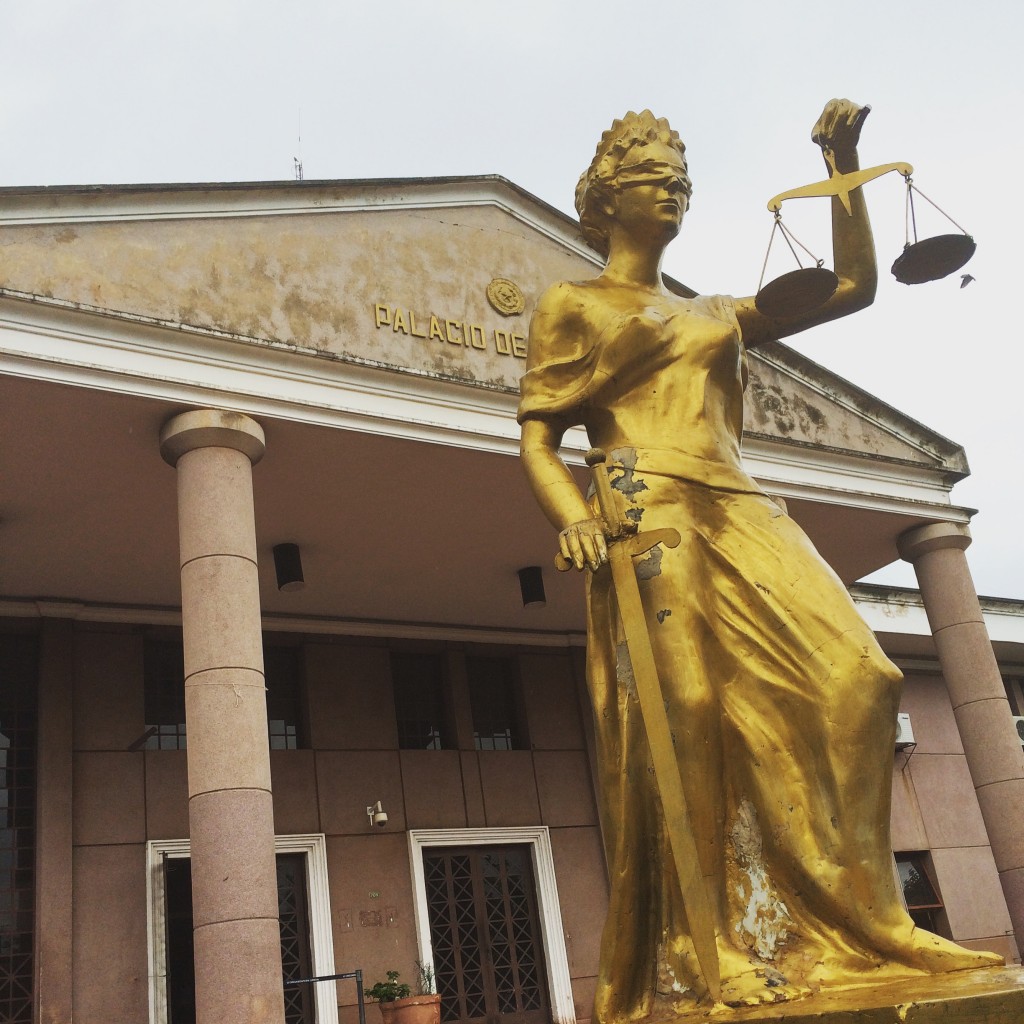 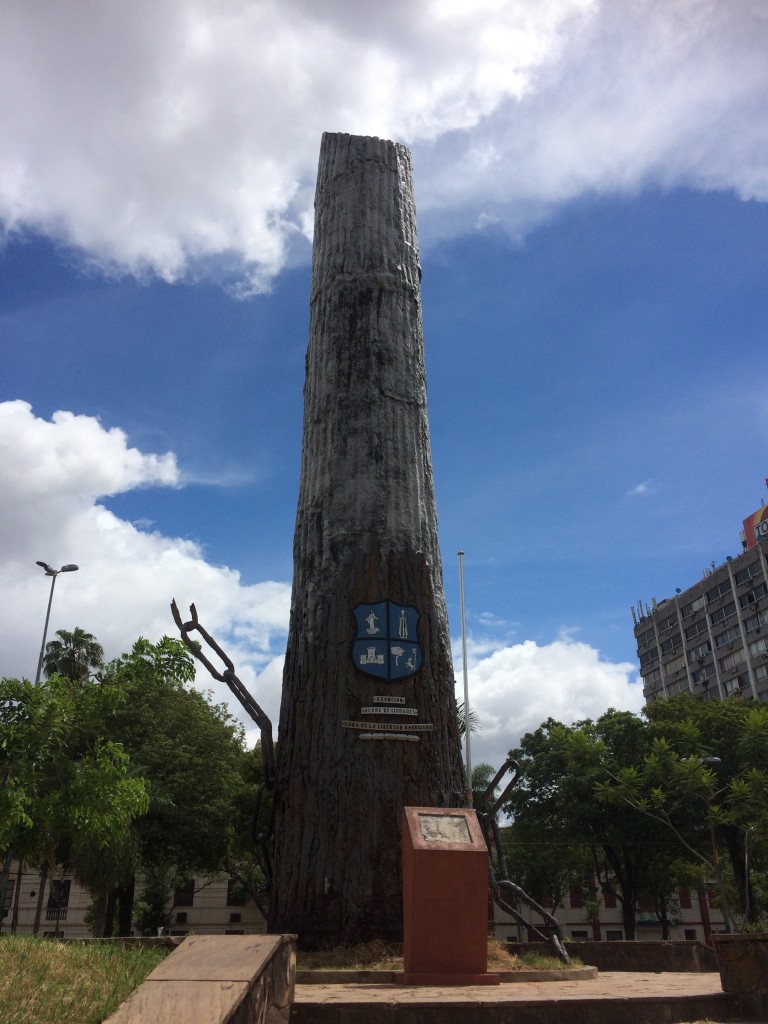 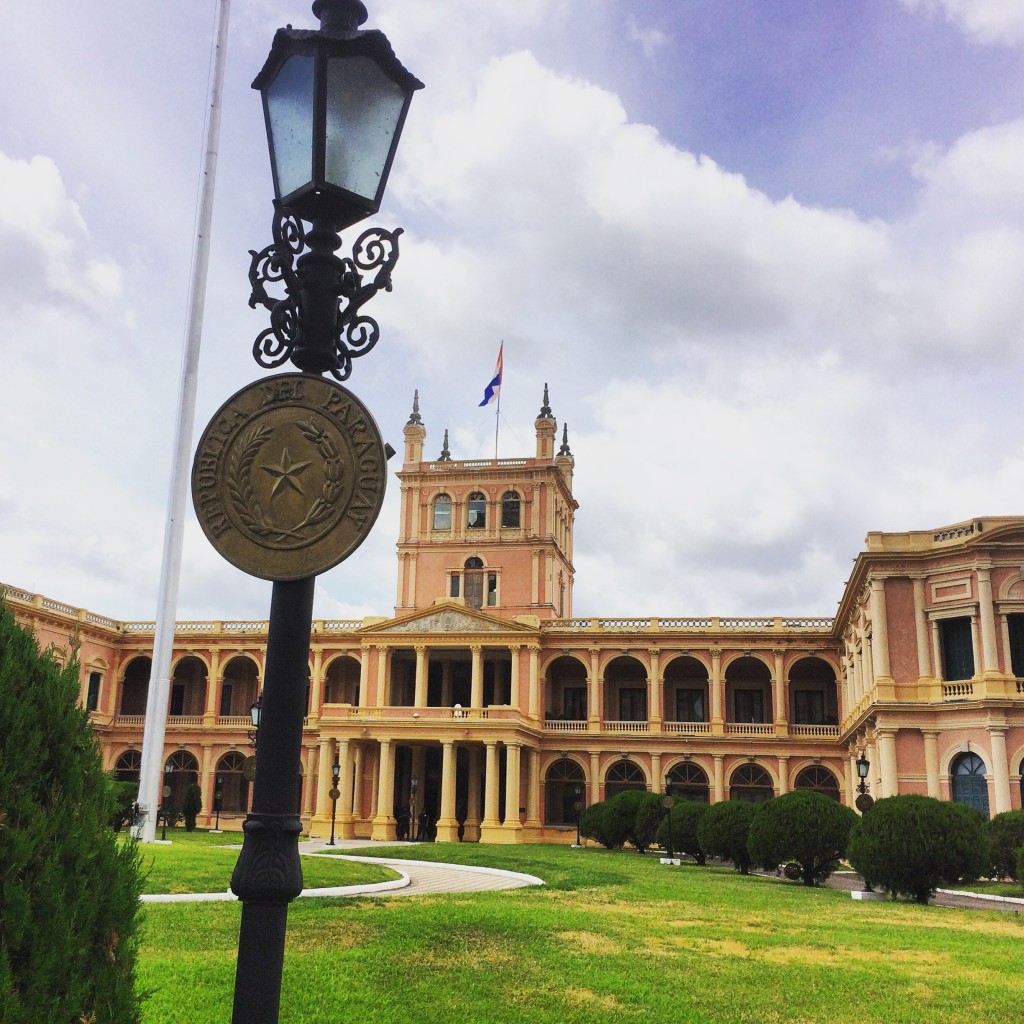 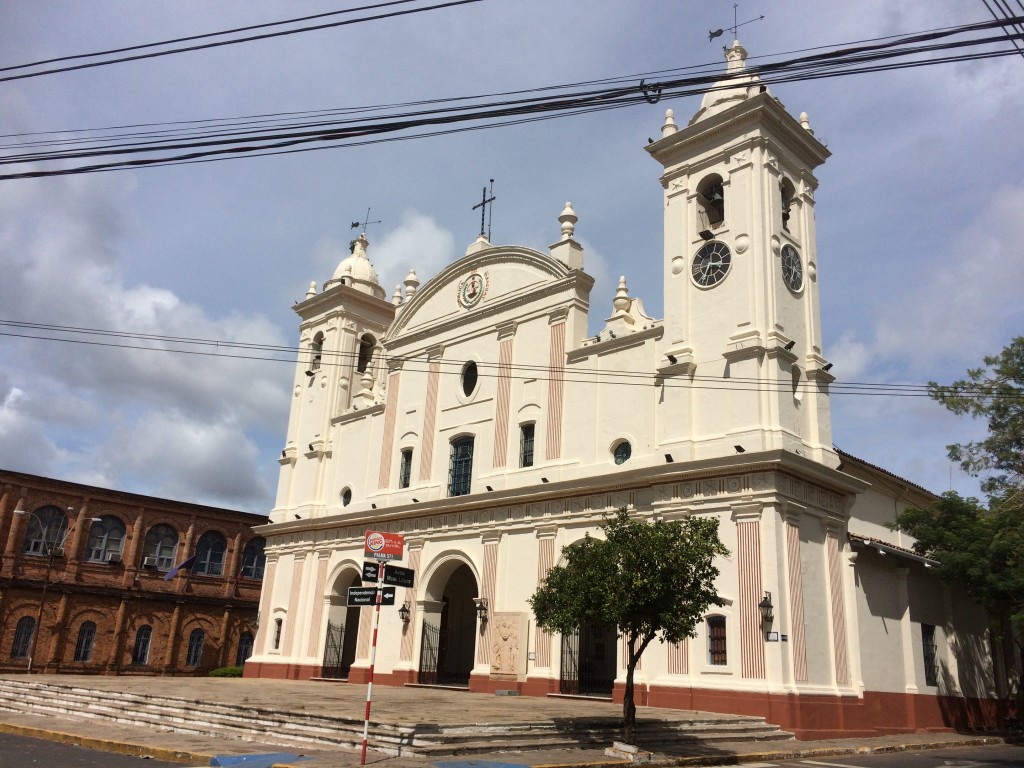 The weather took a turn and the rain came thundering down so we retreated to a cafe which had a security guard complete with a hand gun. As far as I could see, there is a big rich/poor divide in Asunción, with the nicer places in the city being very pricey and off limits to the general population. There was a big shanty town right next to the National Museum. 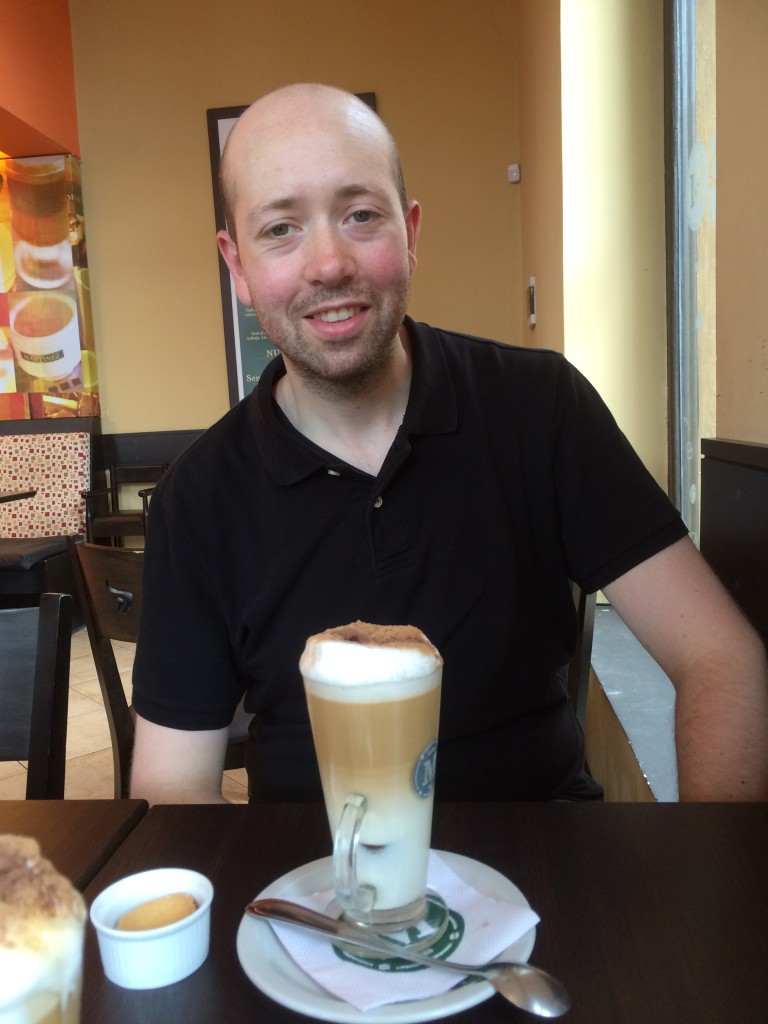 Back in the hostel we got talking to the owner and asked him about Eliza Lynch, the Irish courtesan and mistress to the dictator of Paraguay, Francisco Solano López, at the end of the 19th century and he told us that ‘Madame Lynch is a very divisive figure here’. Some see her as a Marie Antoinette figure who took all she could and was the power behind López while others see her as a helper of the poor Paraguayans and a scapegoat for all that went wrong during the War of the Triple Alliance. He was shocked to hear that she is pretty much unknown in Ireland as she is such a big figure in their history. I had been told of her by my old boss who had come across her while in Paraguay and gave me a book on her life. 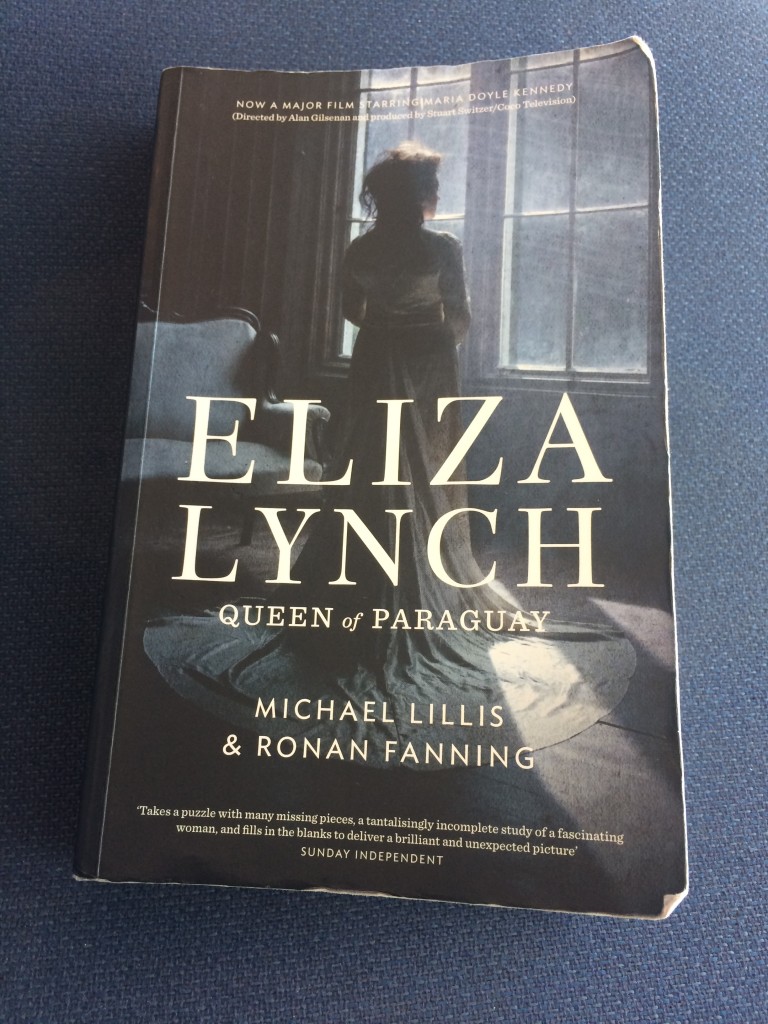 To give a brief outline of her and López’s life, she was born in Charleville, Cork in 1835 but moved with her family to France to escape the famine. In 1854 she met the son of the leader of Paraguay, Francisco Solano López on the Parisian social circuit. Her name was smeared saying she was a prostitute but there is no evidence of that. She returned to Paraguay with him and although they had 6 children together they never married. She was seen as a lower class and not accepted by the aristocracy of Asunción. Paraguay was a wealthy country at the time but when López came to power he had notions of expanding its borders into the neighbouring territory of Brazil and Argentina. The bigger countries didn’t take kindly to this and along with Uruguay set out to put Paraguay back in its place. By the end of the War of the Triple Alliance, Paraguay had lost half of its pre-war population and 26% of its territory. López was killed along with his and Eliza’s oldest son, Juan Francisco “Panchito” López. Eliza buried them with her bare hands in Cero Cora, the town of the final battle. After the war, she was banished by the new Allied-supported government. She ended her days in obscurity in Paris but 100 year later was reburied in Asunción and proclaimed a national hero. A very decisive figure indeed.

Since this war, Paraguayan history has been in turmoil with dictators and military coups but the most recent government seems to be trying to clean up the country and they are no longer seen as the pariah of South America they once were.

On our last night we found a great bar called the Britannia pub which was full of young locals, had great pizza and even its own special brew larger. It was tucked away on a side street and the sort of place you would never find unless you were looking for it. A lot of Asunción seems like this but it’s great when you find these hidden gems.

At the bus station the next morning, I tried the Mata drink that we had seen many people carrying in a flask and drinking on the street. Locals carry a small flask of hot water and a cup with the mata mixture. It’s a blend of green tea and other herbs and surprise surprise, it was horrible! I took a few sips and was nearly sick, definitely an acquired taste and probably like your first cup of coffee, something that you grow to like. 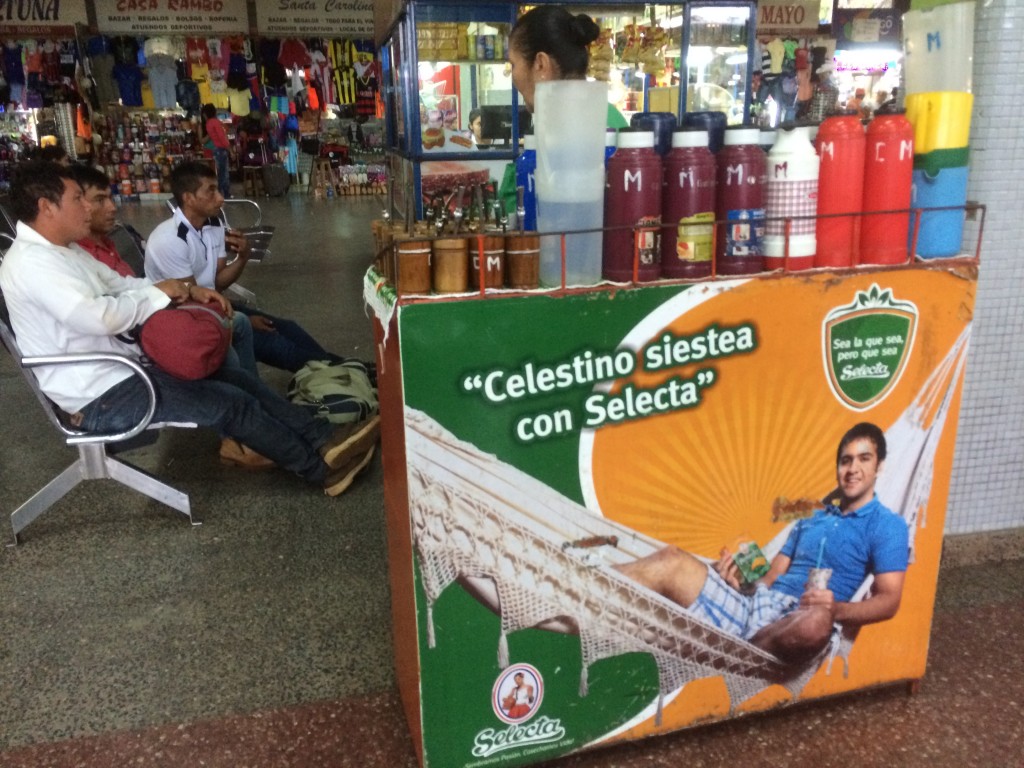 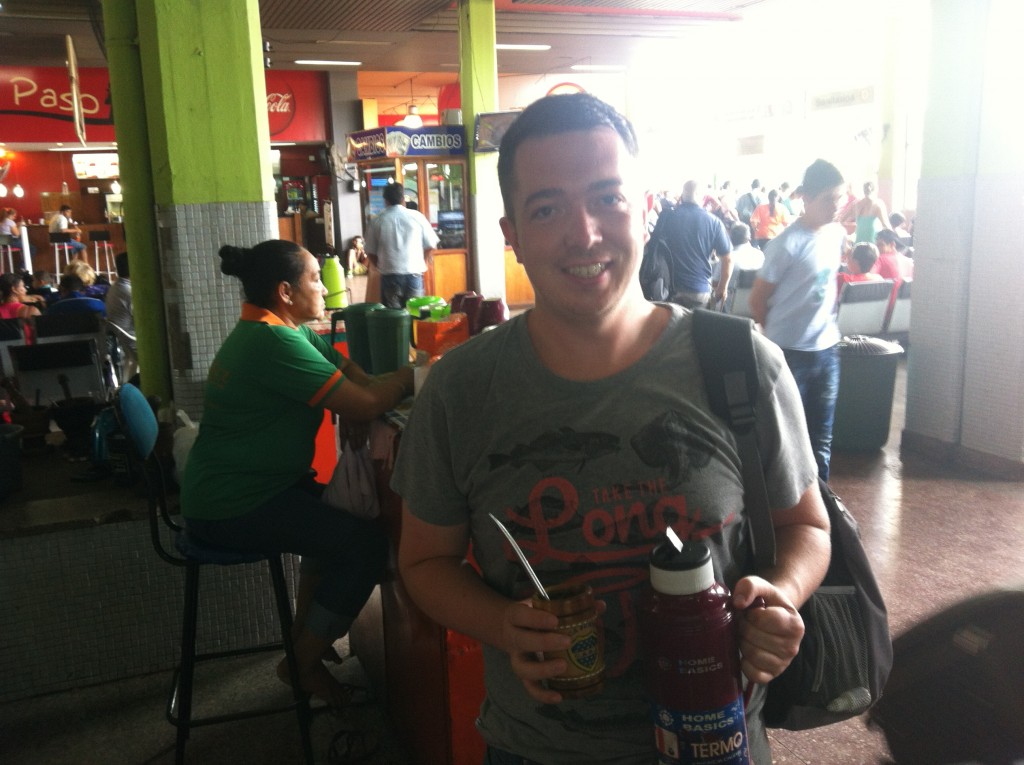 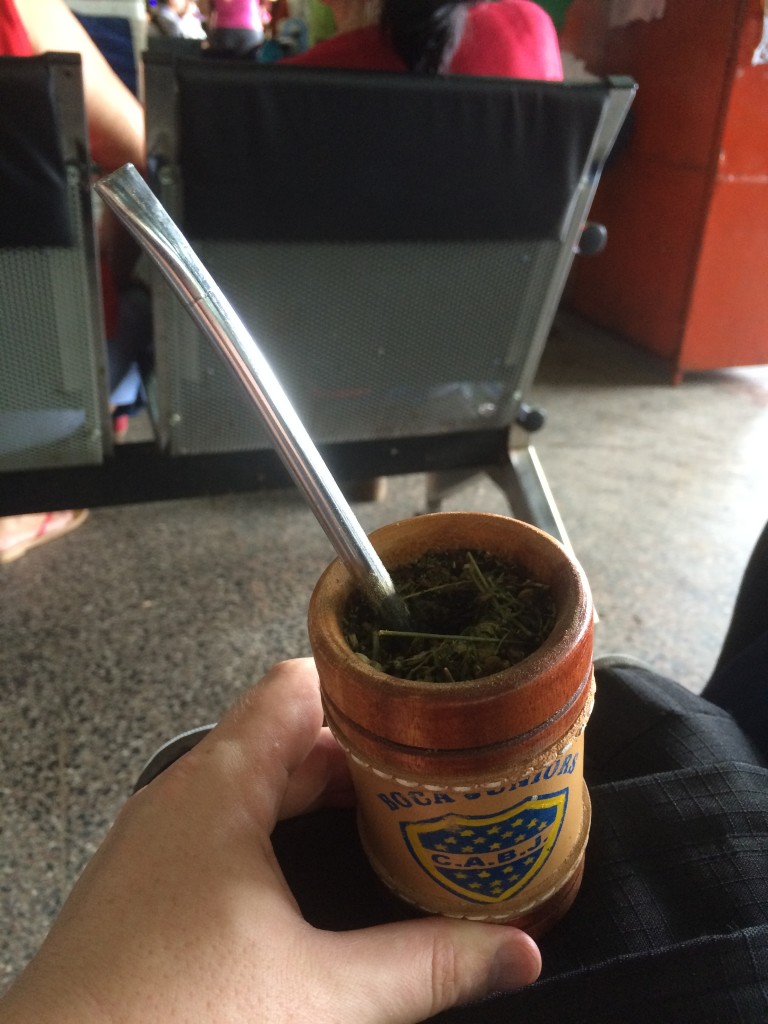 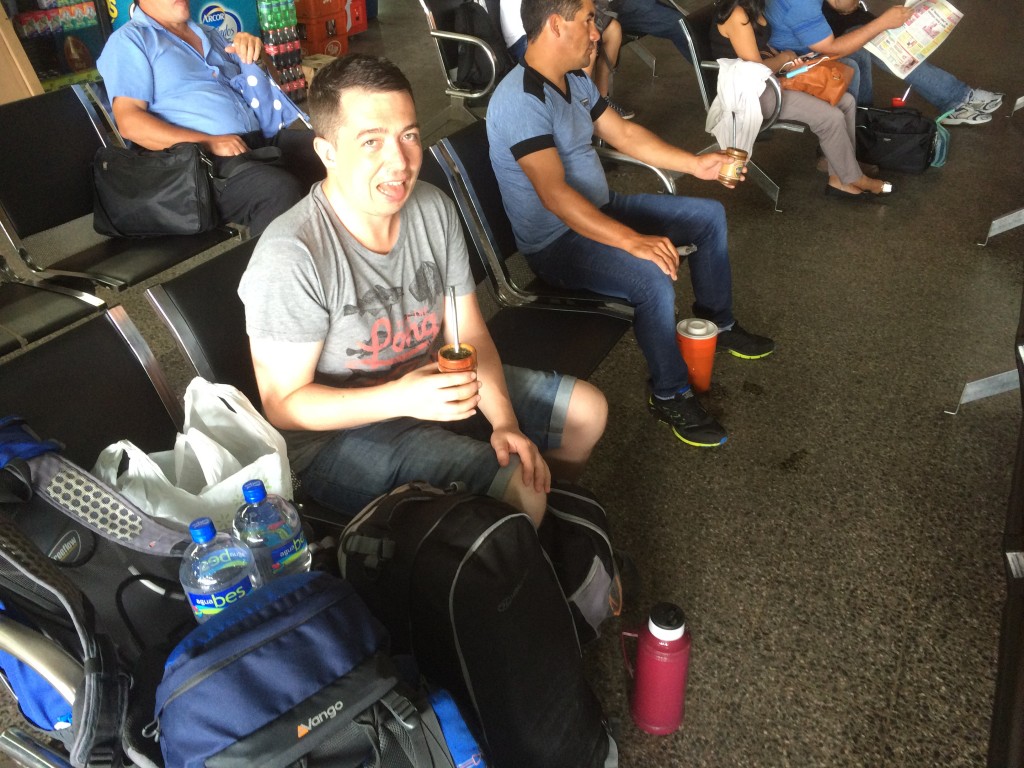 We got the bus back to Ciudad del Este and crossed the ‘Friendship Bridge’ to end our quick visit to Paraguay and moved onto Brazil! 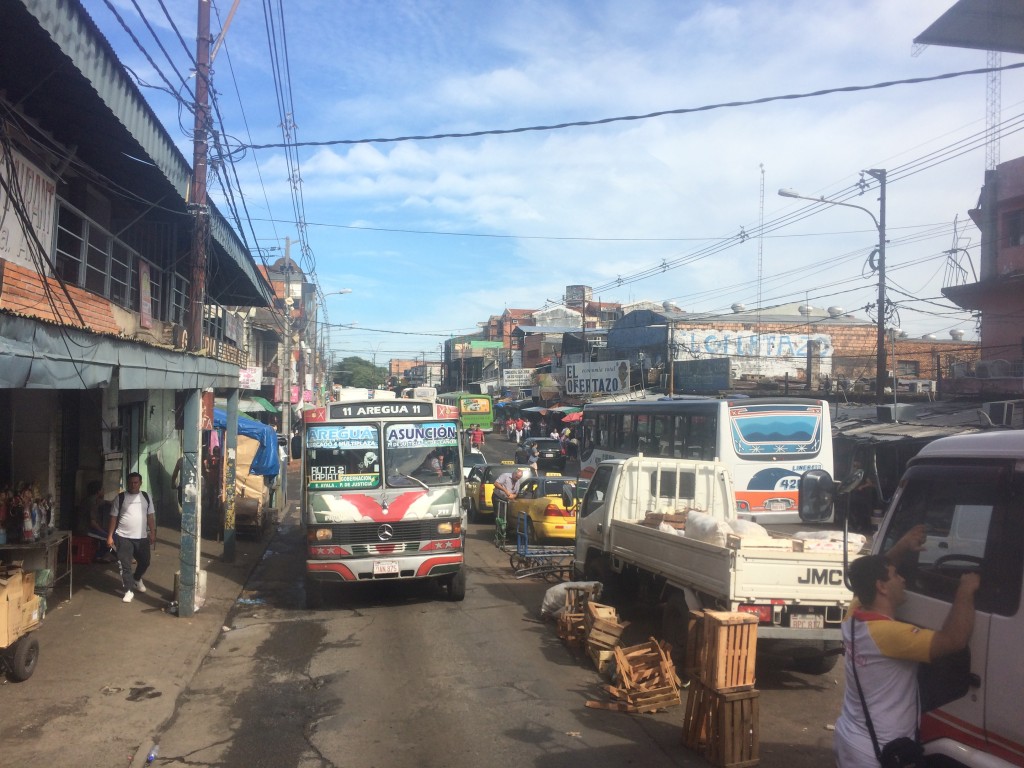 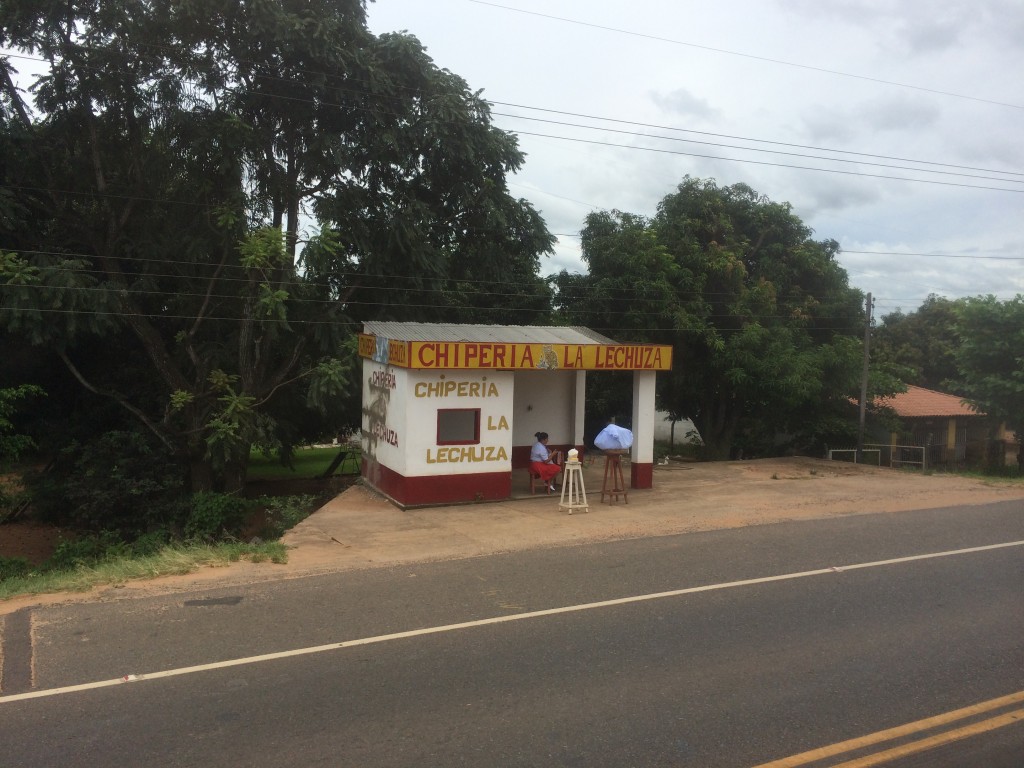 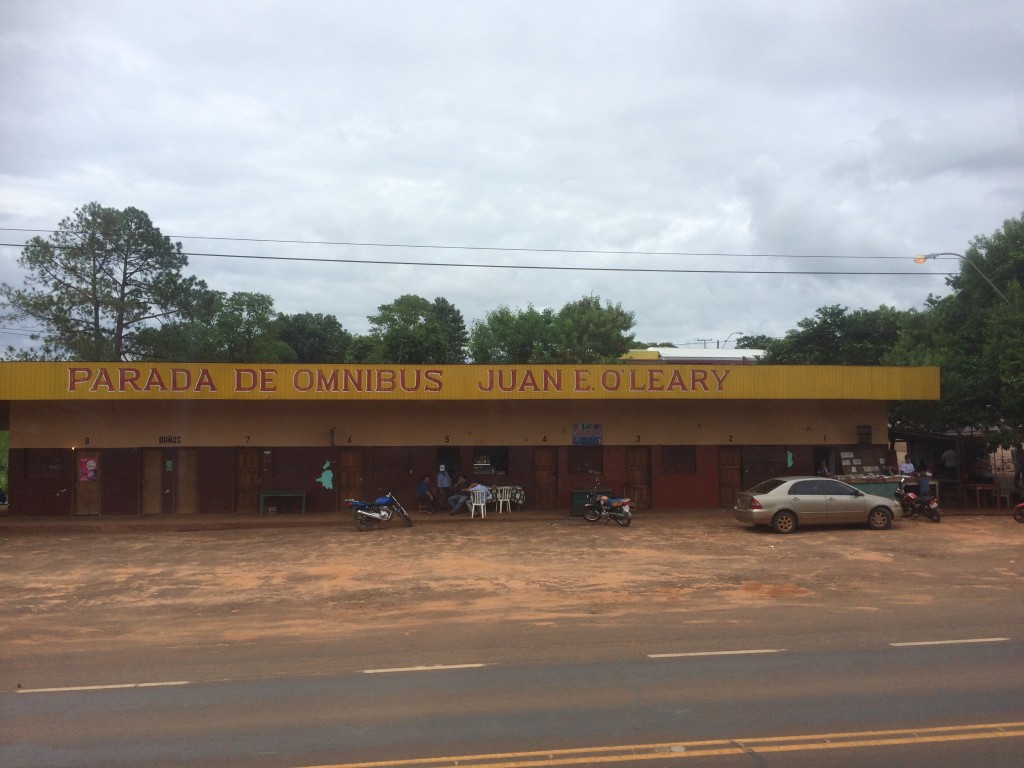 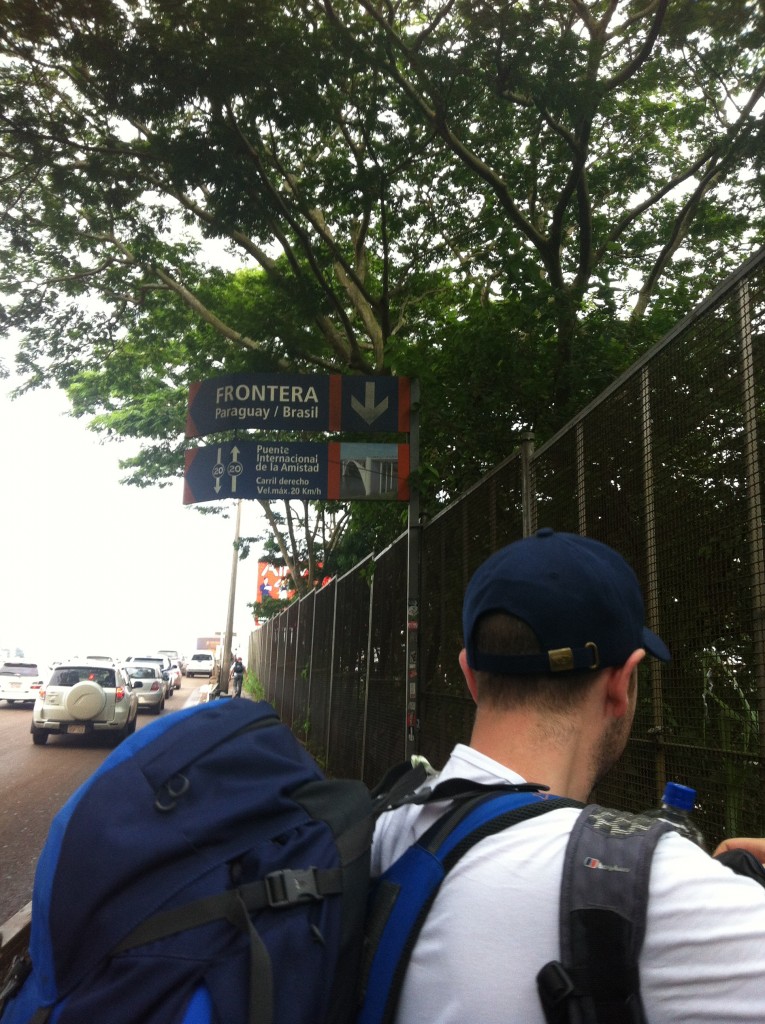 One thought on “Paraguay”