It’s Day 19 of the trip and we arrived into San Francisco yesterday. We drove 3-4 hours from Yosemite National Park into San Fran. We left first thing in the morning as we had to drop the car back by lunchtime. It was really interesting driving down from the Sierra Nevada mountain range into the Bay Area passing small rural farming towns and then as we got closer we came across large horticulture operations growing fruit & veg and of course grape growing wine country. We keep seeing signs about the big water drought issues in California this summer and you could see it in the fields. It’s near the middle of October and it’s still 30 degrees of sunshine everyday! As a local Palestinian deli manager said to us yesterday it’s their Indian summer. (More about him in a future blog post).

As we approached San Fran, the views and feeling crossing the Bay Bridge from Oakland into downtown were amazing. We had the Golden Gate Bridge and Alcatraz to our left and a mix of high-rise buildings and the steep residential hills of San Fran ahead of us. It’s a city I’ve been to a few times and it felt great to be back. Excited for the week ahead. We’re staying in an Airbnb in Berkeley for seven nights so will have a good amount of time to settle time. I was born not too far away from here, so we’re first going to walk around the Berkeley university area and find a laundromat to wash our smoked out clothes from the campfire in Yosemite. We’ll do a full blog on San Francisco early next week as we leave. 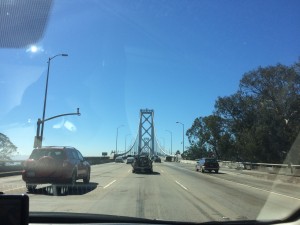 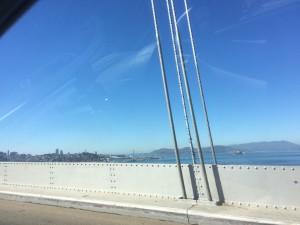 For now, back to around this time last week as we left Las Vegas. Yes I know it’s been a whole week without a blog post (how did I survive!) but we were pretty much on the go driving or in wifi-blackout in the wilderness. I’m going on to update our first four days of the Roadtrip from Vegas to Yosemite and John will do a separate post on our four nights at Yosemite.

So.. (fourth paragraph in and really only the beginning…) we picked up our car rental from Las Vegas airport. Got the hotel shuttle bus which was handy. As John described, Vegas is a big shopping destination as well as everything else. The airport shuttle even detoured via a mall on the way. Everyone on the bus just wanted to get to the airport so there was no surprise when there were no takers when the driver stopped and shouted – “does anyone want to do any last minute shopping!?!”. Las Vegas is great for what it is… an adult entertainment paradise. It’s so well done. It doesn’t miss a trick and keep refreshing itself with new ‘wows’ to keep people coming back.

We had booked a ‘compact’ car online and from all my previous trips to the States, the cars are always huge. Even the pictures online looked good. 5 door Ford Focus or similar. It’ll be ample for what we need. When the rental guy pointed to the car we had an immediate surprised expression.. did we really book a Nissan Versa Note… slightly bigger than a Ford Fiesta. We got going soon enough and kept questioning ourselves whether it would survive the highways and mountain passes. (Thankfully it did).

We drove east along Interstate-40 via the Hoover Dam outside Vegas and the landscape quickly changed from the dry flatness of Nevada to the hills and canyons of northern Arizona. We had booked a room in a hostel in Flagstaff which is an hour south of the Grand Canyon. The drive is about 4 hours from Vegas so we just headed straight there. I had thought of seeing sunset at the Grand Canyon but had to leave that given the time and darkness falling. It gets dark around 18.30 so our days have been trying to see everything on the road and get to our destination before then. Flagstaff is a large town and home to a big university. It’s also a traditional stop off point on Route 66. You can see signs of it everywhere. It has a nice young creative vibe around… coffee shops and gastro pubs. We settled into the hostel that night and it was strange bumping into other travellers around the place, but we’ll quickly get into that again. 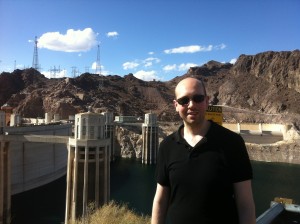 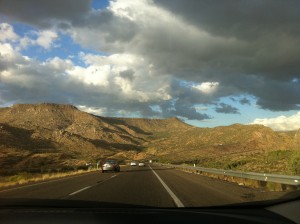 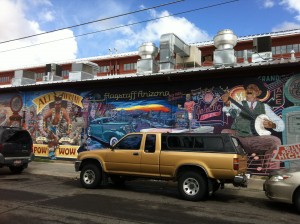 The temperature had dropped quite a bit to 10 degrees at night and it rained overnight. When we woke up it was still raining and heavily too. Monday was our Grand Canyon day so we just decided to get into the car and drive the hour and a half there. It could well blow over. The rain had stopped by the time we got there but it was very misty in the canyon.. not a lot to see. It’s funny – when I was there last in 1998(?) it was the same. We walked along the ridge with the other American tourists and bus-loads of Chinese. Thankfully the sun came out and the mist went. It’s such a spectacular place with lots of viewing points. You end up taking loads of photos but every one of them look similar (how many more angles can one get!) and equally dramatic. The weather was still good so we trekked down the canyon a mile or two along a windy path which kept going. We kept passing people on their way back up. Some had huge backpacks like our main bags.. fair play to them! We could see the rain coming in so on went our raincoats and we started the trek back up in a torrential downpour. There was thunder and lighting but we did ok getting back to the car. Cheers again for the raincoat Mum – it passed the test! 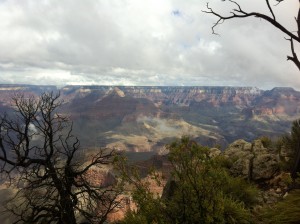 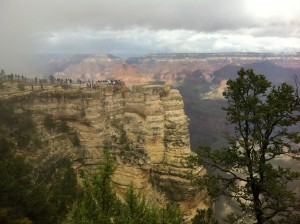 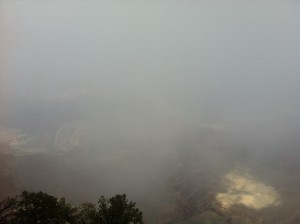 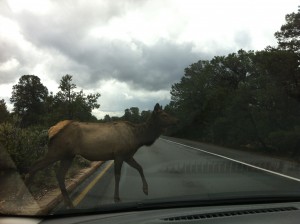 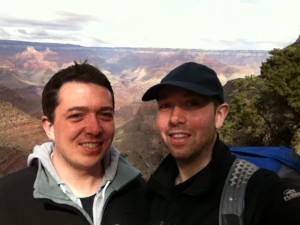 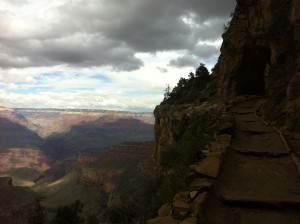 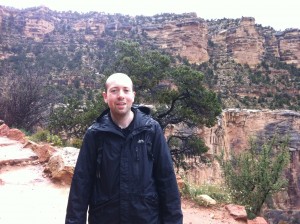 The next day (Tuesday) we checked out of the hostel and hit the road. This time driving north east from Flagstaff to Navajo Indian country. It was a good auld four hour drive to get to Monument Valley just over the border into Utah. The landscape just got redder as we drove with huge rock formations rising from the ground. Monument Valley is where the famous rock formations from all the western movies are. The local Navajo people have done a good job of turning it into a planned tourist site with a visitor centre, admission fees n all. They’ve built a rough safari route to drive around and see them up close. From the looks of it we didn’t think our car would make it through it alive. All we saw were 4x4s struggling slowly along the uneven clay dirt tracks. We made it through in the end but it seems the car took an hour or two to fully forgive us. Afterwards (it was 6ish at this stage) we made a back of the car lunch which we’ve become pros at. Some bread, butter a bit of swiss cheese and salami, if we have it, go well together. Also not to forget the crisps! 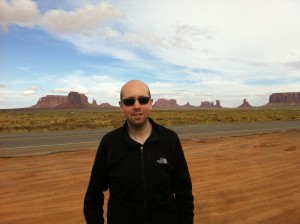 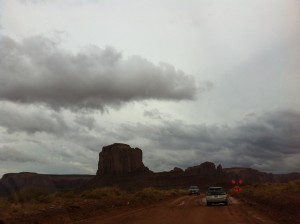 That night was our first not to pre-book any accommodation. We didn’t have a set plan so we thought we’d easily find a motel somewhere. We picked a town called Page (Arizona) which was a two hour drive west of Monument Valley. Again amazing thunder and lightning as we crossed the uphill landscape on the way. Really heavy rain in the dark slowed us down for a bit… couldn’t see anything besides the car five feet ahead of us. As it worked out, everything in Page was booked out by the time we arrived. It was ‘the end of the holiday season’ so we got McFlurrys in McDs and searched online for other towns with places to stay. Everything was an hour plus away and it was coming to 9pm. We found a reasonably priced motel in a town called St. George which was a two hour drive west which was just over the border in Utah. So on we went driving and got there at 11.30pm but it was actually past midnight when I saw the check-in guys watch. Utah is on ‘mountain time (MT)’ and an hour ahead. We were wrecked and lost an hour so straight to bed. 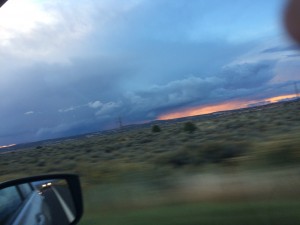 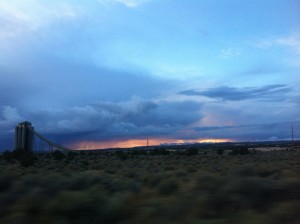 The next day was ‘a driving day’ as we had one more night before checking into Yosemite. We had bits of Arizona, Nevada and California to get through. This time we booked a Super 8 Motel in Ridgecrest (California) for the night so we had a target – get there before nightfall. It’s very hard to describe but the landscapes in America are amazing and dramatic. We just end up automatically saying to each other “look over there”, “isn’t it amazing” with the other grunting back. What else is there for say!! We drove along Intersate-15 towards California and drove right past Las Vegas again. A lunch stop in Denny’s (yummy eggs and blueberry pancakes!!) at a run-down-casino-hotel and some cheaper Nevada petrol later and we were over the border into California. We just kept driving and reached Ridgecrest just after dark. It was situated in a valley in the Sierra Nevada mountain range that dominates the Nevada/California border. My favourite time of day is dusk when the sun is going down so it was really special driving the last hour into the mountains. 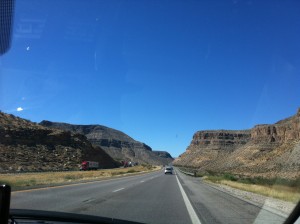 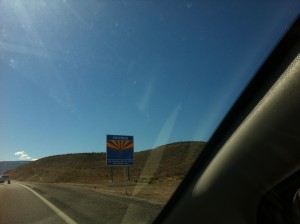 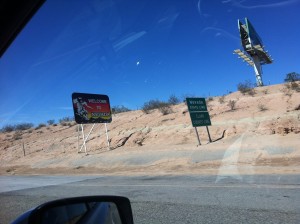 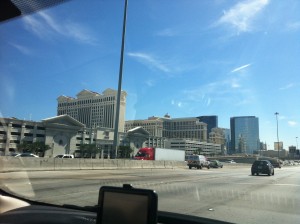 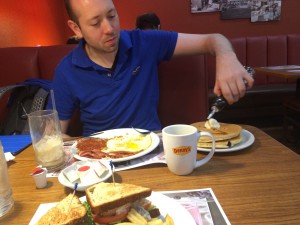 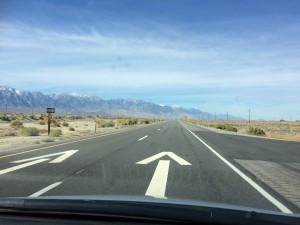 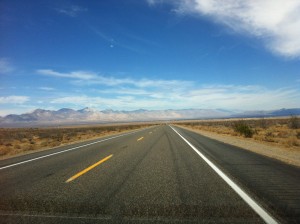 John will pick up the next day as we drove to Yosemite through the Sierra Nevada. We were moving from on the road motel living to camping (or more glamping).