It’s Day 5 here in New York and it feels like we’ve been here for a couple of weeks at this stage. We’ve packed a lot in so far but haven’t been rushing around too much – more walking through the neighbourhoods on Manhattan island and discovering the place. Before we landed I thought NYC was going to be crazy to get around and be too overpowering with crowds. There is of course people rushing around but no different to Dublin. It’s also really walkable and the subway works well. Each neighbourhood from West Village to Midtown to The Bowery are so different and great to explore and get a sense of. They each give different snapshots of people’s lives here. And new to me.. Not all of Manhattan is dominated by skyscrapers, loads of downtown is only 4/5 stories. Makes a really nice contrast as you walk around.

Last night we stayed up in Westchester County (Yonkers) with my long-lost cousin Bill and his partner Dan. It’s about 30 mins north of Manhattan and has good train connections downtown. They’ve been really kind having us over for two nights on our trip and we’ve spent some great times with them the last few days (more of that in my next post)

So back to Thursday when we arrived. The JFK Airtrain and subway lines from the airport to downtown were pretty easy, but again we were regretting packing so much! The Airbnb apt we were renting in East Village was owned by a woman living in China but her maid-on-the-ground Roxy let us in and left as quickly as she could. “There’s a note from Sophie on the fridge” and she was nearly out the door before we turned back around! It’s was a standard studio apartment which was more about the location than its look. We settled in and slept for a few hours to get over the jet lag. We ventured out around 6pm and it was dark already. Loads of activity on the streets.. all the restaurants and bars were busy with joggers everywhere! Some joggers wearing very little to show off. Sure if you can why not. 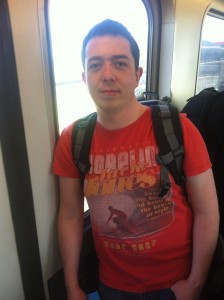 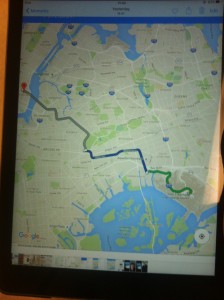 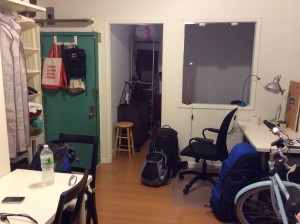 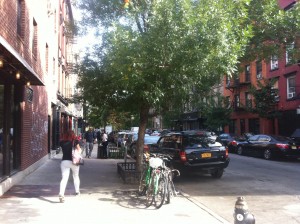 The pizza slice joints were too tempting to stay away from so we got one each to settle ourselves in. We then walked in semi-aww from 1st to 10th Av (east to west) at all the shops and bars and general street life. It’s just like what you see on all the tv shows set here. We got over to West Village and grabbed some tacos and beer and just people watched outside. It’s been mid 20s so everyone has been sitting outside chatting loudly as they do. We just have to laugh as we walk down the streets here and overhear various conversations going on. Gotta love the American spirit of openness and sharing!

We walked about 30 blocks north to Times Square at about 10pm and at this stage we were getting pretty tired. All the lights and crowds around Times Sq kept us awake. It was one of those moments when we realised we were actually here! I felt my eyes starting to hurt with the lights and tiredness so we retreated after midnight and got the subway back to 12th street. Sleep time.

Friday was pope-mania-day around New York. Bill gave us a good rundown of Francis’s itinerary and where to avoid so we planned to stay away from south of the Island in the morning and Central Park in the afternoon. It’s much better to have a nicer world figure head etc. but thank god I was born in the 80s. If the pope’s visit to Ireland in the 70s was anything like the mania here it must have been unbearable. In the end we just chilled in the apartment for a few hours which is what we do best when we’re away. Neither of us are into rushing from tour to tour so it works great for both of us and bodes well for the seven months! 🙂 We tried to book tickets online for the Statue of Liberty but when we tried to select a time, it said it was all booked out till the end of October. A quick Google search replied “book before you arrive”. More planning need next time. So we decided to walk towards the State Island ferry and see it from there. 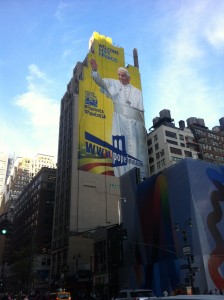 On our way there we walked south through The Bowery and Chinatown neighbourhoods. These areas still have an edge to them but gentrification is catching up quickly! My parents stayed in The Bowery for a summer back in the late 70s and it was a very run down/edgy area back then. East Village where we were staying is very close by so it was a nice parallel between our trip and theirs. 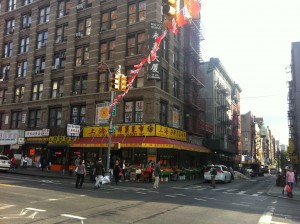 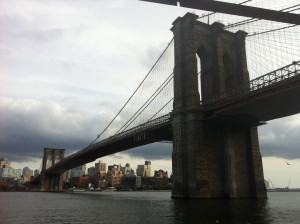 We got the ferry over and back and then wandered through the financial district and saw Wall Street/NYSE and the Raging Bull. We were due to meet Bill & Dan later that eve so we stopped outside Starbucks to get some of their free wifi! This has been a regular thing… thank god for SB & McDs. The World Trade Centre area was quite peaceful after the pope’s visit earlier. We walked around and stopped at the memorials. It’s feels so real when you’re standing beside nearby skyscrapers that look just like the World Trade Towers and you try to imagine what it was like that day. Unimaginable. 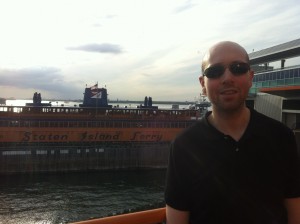 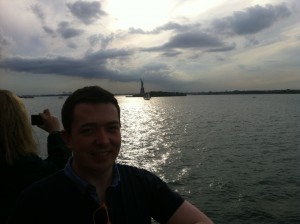 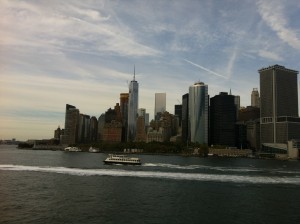 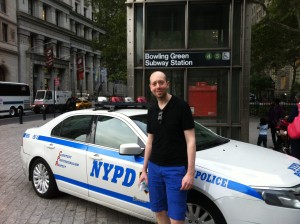 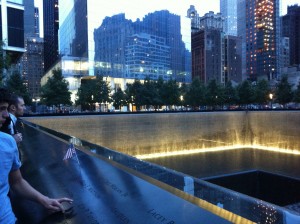 We were due to meet the guys in a few hours so we headed back to the apartment and picked up a 6-pac (of beer!) at the local convenience store to get us started. Of course the guy asked us for ID which we of course didn’t have. I completely forgot they ask for ID everywhere regardless of your age. This came to haunt us again later!

After a few drinks it was 8.30 and we knew we had to leave to get up to Hell’s Kitchen to meet the guys. We thought we had enough time but our local subway line closed down temporary after waiting 20 mins for a train and we had to walk 5 blocks to get another subway line at Union Sq. We were meant to meet them at 9, but by this stage it was 9.30 and it was getting embarrassingly late (even though they are so nice and relaxed). We found the bar Therapy just after 10pm (an hour late!) and we went “Oh Shit!” as we got to the door. No IDs AGAIN!! Absolutely no cards on us besides cash. We attempted to chat the burly bouncers up but they were having none of it. There we were dead late, outside the bar, no phone numbers for them and not to forget they were family I had met briefly once in my life five years ago. Thankfully there was a Starbucks on the corner and we managed to email them and they met us outside. All we could do is laugh… what an great start. But sure we’re backpackers now winging it.

They suggested we try a bar called Flaming Saddles around the corner and we managed to play the Irish charm/long lost cousin story to get in. It was a real fun bar.. a male version of coyote ugly. Have a drink or two and next minute the bar men are doing a jig above the bar. We had a really great night getting to know Dan & Bill!  Even though I met them both briefly at a family event in Ireland in 2011 it felt like I knew them a good bit longer. There’s nothing better exploring a city with people you know there and getting a glimpse into their New York lives. More of this to come in my next post. We had a brilliant day with them yesterday. 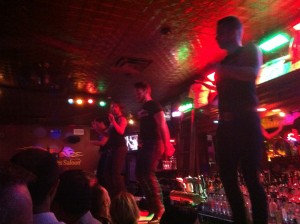 We drank like true Irish guys abroad and all stumbled out of the place about 1am. They were getting a train home from Grand Central so we grabbed a taxi with them and got the subway from there too. Love how their transport system runs 24/7. It was really special walking through Grand Central Station when it was empty during the night. (One million people pass through it every day). Even with the drink we managed to take in some of the architectural features and the guys acted as perfect tour guides. What a great way to end the night.

Okay this is turning into an essay and only two days down. More tomorrow at some stage 🙂 Getting the commuter train down to Central Park now to explore the area. Probably drop into the Met and Guggenheim museum to check out the building. We’ve been drinking every night so maybe an easy one tonight.